A new study by T&E has, for the first time, calculated possible revenues that could be raised by the Treasury if the UK government were to impose a duty on the fuel (in a similar fashion to how road fuel is taxed) uplifted to planes in the UK. In 2019, by imposing a kerosene tax at the same level as motorists pay, airlines would have collectively had to pay £6.7 billion for their fuel [1].

In the UK, fuel duty is an excise duty levied on petrol and diesel used for road transport. Unlike truckers and motorists, airlines have never paid a single penny of duty on the fuel they uplift at UK airports. And as – in further ignorance of the polluter pays principle – long-haul flights are not included in the UK emissions trading scheme, (the carbon market for aviation), long haul carrier airlines do not pay a penny for any of the emissions they cause. In contrast, jet fuel taken on for domestic aviation has been taxed for many years in countries such as the US, Japan, India and Brazil.

Matt Finch, UK Policy Manager at T&E, said: “The UK is effectively a tax haven for airlines. Any British motorist paid more fuel duty last time they filled up than British Airlines has ever paid. A kerosene tax makes environmental and social sense, in times of climate and economic crisis.”

The study modeled possible revenues for a kerosene tax applied to flights to different destinations. Taxing domestic flights, which represent 19% of all UK departing flights, but only 4% of total jet fuel used, could generate £0.26 billion. For flights departing to the EU (65% of flights and 30% of jet fuel), revenues calculated were £1.93 billion. For flights to the US, the Treasury could generate £1.6 billion. 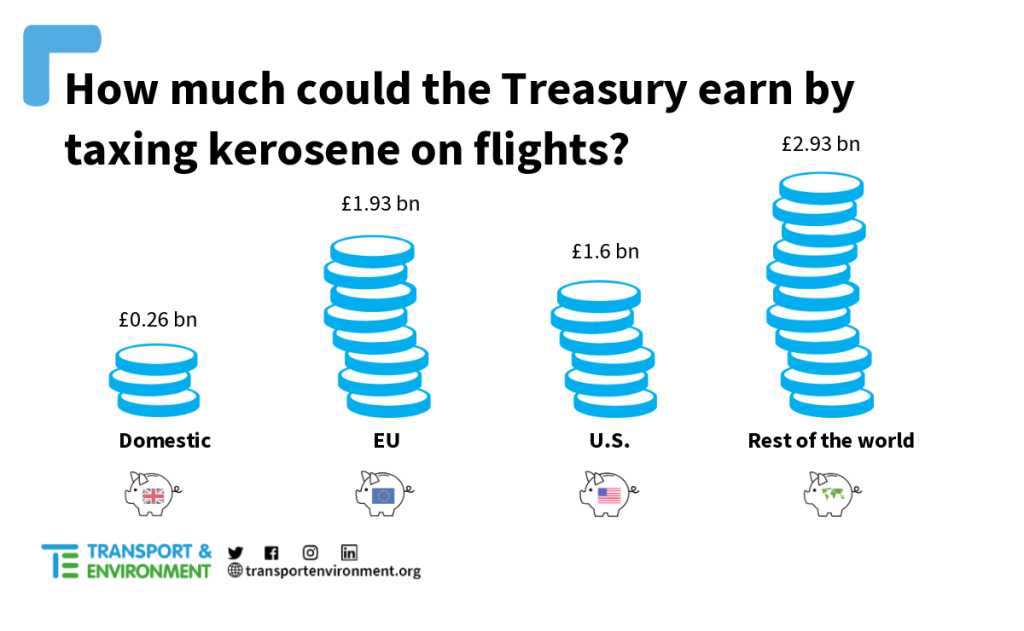 Some of the revenues raised by the government should be reinvested in the decarbonisation of the aviation sector, T&E says. In particular, this money should be spent on accelerating the uptake of sustainable aviation fuel (SAF) – most importantly the development of e-kerosene – and the development of zero-emission aircraft.

“Early investment in the decarbonisation of aviation will be key, if the sector has any chance of reaching net-zero. This new government should tax kerosene and use the revenue generated to fund clean aviation. The absolute priority must be sustainable aviation fuels, specifically e-fuels – which hold the key to green flying in the long run”, concluded Matt Finch.

[1] Calculations were made using a tax rate of 57.95p a litre – which is the rate fuel excise duty will be from April 2023. Currently, the charge is 52.95p a litre on all fuel purchased – but this is a temporary price, implemented as a result of the current economic crisis.