According to a recent YouGov poll, a clear majority of the population is in favor of stricter emission limits that require car manufacturers to keep air pollution from vehicles as low as possible. Two thirds (66 percent) of those surveyed in Germany are in favor of car manufacturers being legally obliged to reduce emissions from new cars as far as technically possible. YouGov surveyed more than 8,000 people in seven EU countries on behalf of Transport & Environment (T&E): Germany, France, Italy, Spain, Poland, Romania and the Czech Republic. 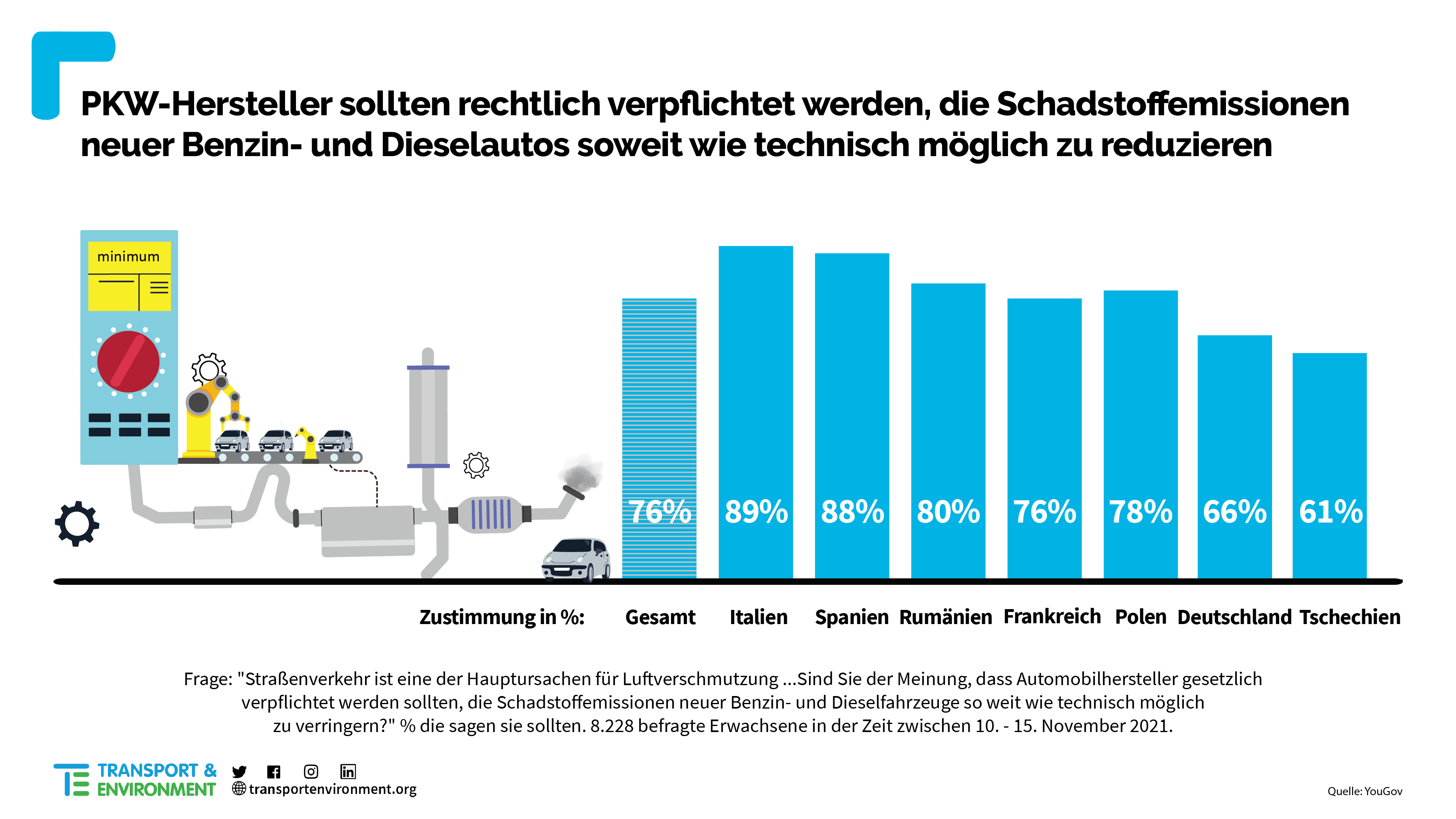 In Germany, 57 percent of those surveyed who would buy a new vehicle are willing to pay up to 500 euros more when buying a car – the maximum additional costs for manufacturers to significantly reduce the pollutant emissions of their cars. The EU Commission is currently examining proposals for new emission standards for cars. These could help improve the dramatically poor air quality in many European cities, which causes tens of thousands of premature deaths every year. The Commission estimates the costs at 100 to 500 euros per car. However, the auto industry fears that cleaner vehicles will eat away at their profits and for a relaxation of the new regulations. [1] 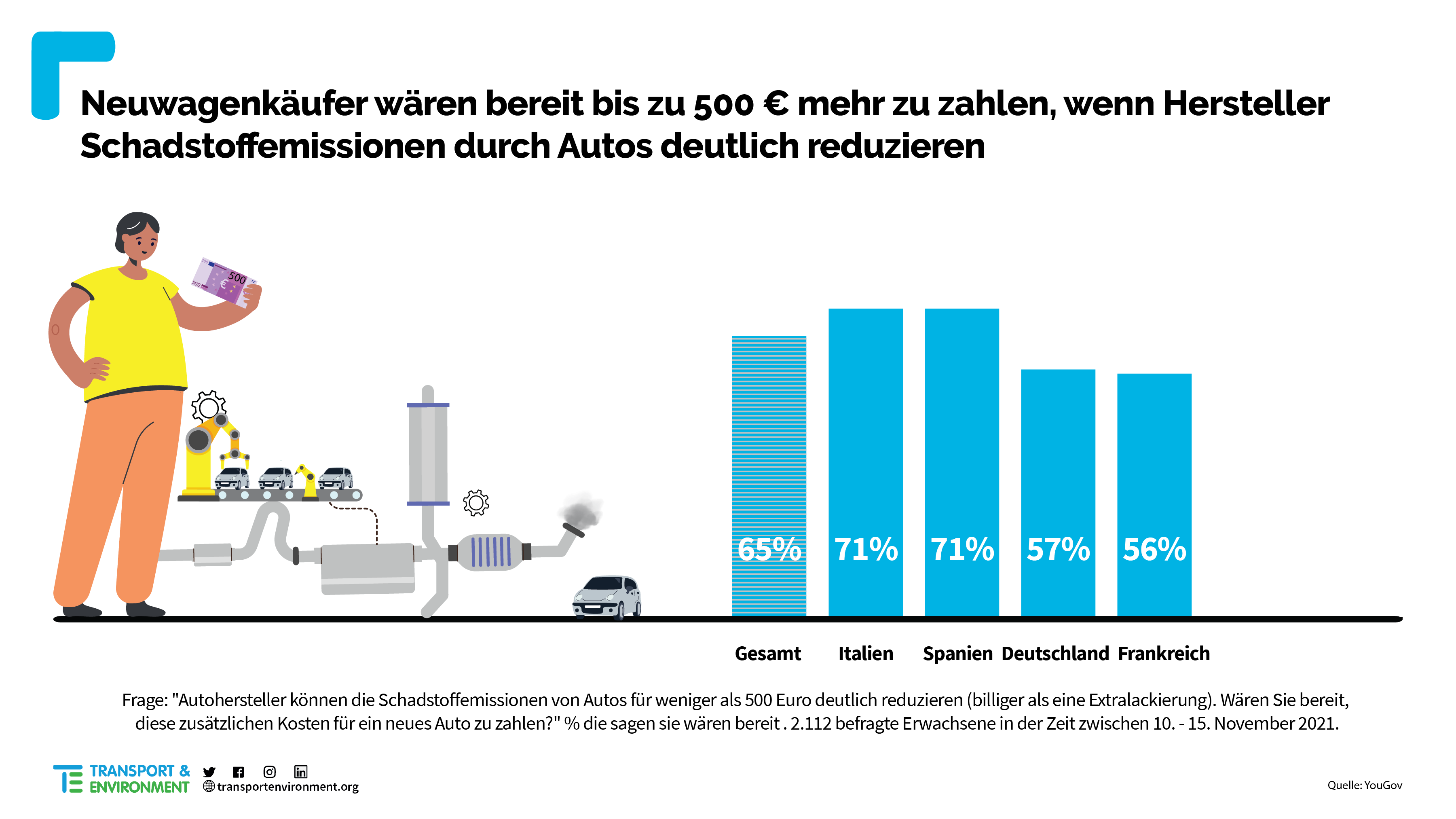 Fabian Sperka, Vehicle Policy Manager at T&E, explains: “ The automotive industry claims that it is too expensive to reduce emissions from vehicles when the real cost is less than a new vehicle paint job . The public, on the other hand, wants cars to be as clean as possible – and people are willing to pay more for clean cars. This impressively invalidates the arguments of the automotive industry.”

A large majority of respondents are also in favor of obliging car manufacturers to reduce exhaust emissions throughout the entire journey – and not just when they are measured under ideal conditions. More than two-thirds (67 percent) of people surveyed in Germany believe that passenger cars should comply with the legal emission limits, regardless of how, when and where they are driven. [2] Current emission limits do not apply, for example, to short urban journeys where vehicles stop and start more often, or when they accelerate quickly even though the engines emit more exhaust fumes.

The EU Commission is expected to present a proposal for the new Euro 7 emissions standard in April. The limits would apply to up to 100 million new petrol and diesel vehicles sold in Europe from 2025. Reducing air pollution is one of the top priorities of the European Green Deal. The EU Commission is currently reviewing recommendations for the standard after having commissioned independent experts to review the best available technologies.

Emissions from road transport are a major contributor to air pollution and cause a wide range of serious diseases, including heart and lung diseases and cancer. Every year in the EU, air pollution from road traffic is responsible for tens of thousands of premature deaths and costs society billions of euros in healthcare costs. Poor air quality also disproportionately affects low-income households and minorities.

[2] 48 percent of respondents answered the question “To what extent do you agree or disagree with the following statement? Cars should comply with the legal emission limits, regardless of how, when and where they are driven.” with “I completely agree” and 29 percent with “I generally agree”.