The supply of electric vans is failing to meet the demand from business, a new study by Transport & Environment (T&E) has found. The study found electric vans are cheaper to own and run in the UK than diesel models, and nearly nine in 10 UK businesses surveyed confirmed they either already own an e-van or will consider buying one in the next five years.But the supply of e-van models is not matching demand – accounting for just 3.5% of sales in 2021 and lagging far behind battery electric cars (11.5%).

T&E said the supply of zero-emissions vans will continue to fall far short of business needs unless the proposed zero emissions vehicles (ZEV) mandate for vans, scheduled to start in 2024, requires manufacturers to sell one zero emission model for every five vans by then.

The study showed the total costs of owning and running an electric van in the UK are between a fifth (19%) and a quarter less than equivalent diesel vans. (The analysis was completed before the recent fuel and energy price spikes.) 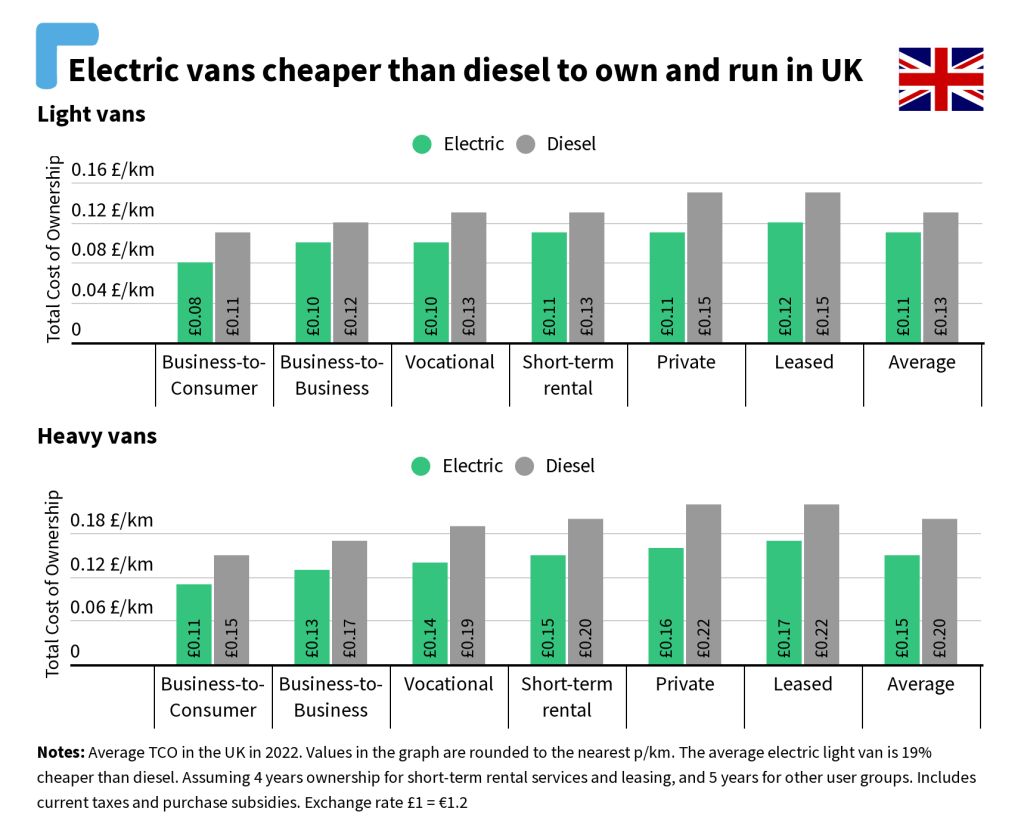 The survey by Dataforce for T&E, including responses from 124 British private users and businesses, shows 89% are now ready to go electric in the UK. Among respondents who do not already own an electric van, almost half (49%) said they wanted to buy an e-van in 2022.

Ralph Palmer from T&E UK said: “Van drivers want to ditch diesel and go green by switching to electric models that are at least a fifth cheaper to own and run. But van manufacturers are drip feeding electric vans into the UK market. It’s time to open the tap by regulating vanmakers and make them supply more e-vans to the UK.”

There will be 43 electric van models on the market by the end of the year – more than double the number on offer in 2019 (18 models), the T&E study also found. The models arriving this year will have an average range of 168 miles, up from 139 miles in 2021, increasing their appeal. But weak UK regulations, inherited from the EU, mean van-makers don’t need to supply many electric vans to meet climate targets – in contrast to electric cars where stricter targets are driving the market and sales are rocketing. There are also concerns manufacturers will prioritise supplying the bigger EU market over supplying vans to the UK.

Ralph Palmer concluded: “A rapid shift to e-vans is a triple-win for our energy security, business costs and environment, slashing climate and air pollution emissions. But without new regulations, UK businesses will continue to be denied the e-vans they want to use.”

Over a fifth of diesel burned in vans in the UK originates in Russia. A rapid switch to e-vans is needed to complement the planned Russian oil embargo and help reduce diesel oil imports. This will prevent a simple shuffling of oil supplies which would fail to reduce sales and revenues from Russian oil.