The UK’s car taxes are sending mixed signals to electric car drivers, with some progressive measures on company car taxation (benefit-in-kind) but laggard rules on road tax for private individuals. The Vehicle Excise Duty (road tax) is one of the lowest in Europe, with a tax differential between zero-emission and emitting cars ten times lower than other European countries. Despite electric vehicles having a lower total cost of ownership due to lower running costs, there is little incentive at the point of purchase due to the small gap between the acquisition taxes for electric and polluting cars. 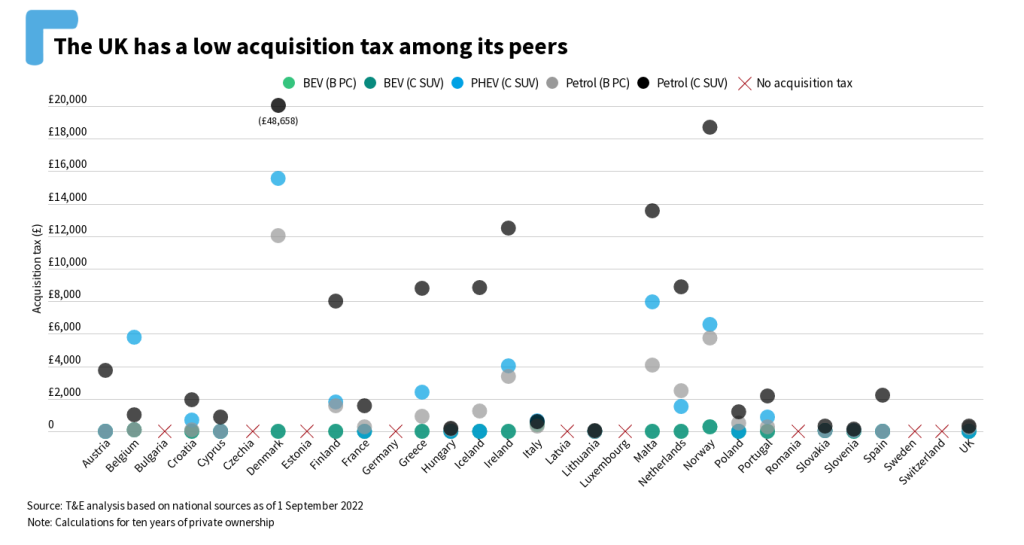 A high tax differential is achieved by levying a high tax burden on polluting cars and/or a low tax burden on zero-emission cars. Over ten years, in the UK, the net difference in tax burden for a small BEV versus a petrol car is £6,239 with subsidies[1]. In Norway, it is £16,698. Tax differentials for cars are often correlated with the uptake of BEVs in a country, such as in Denmark and Norway, a new T&E study finds. 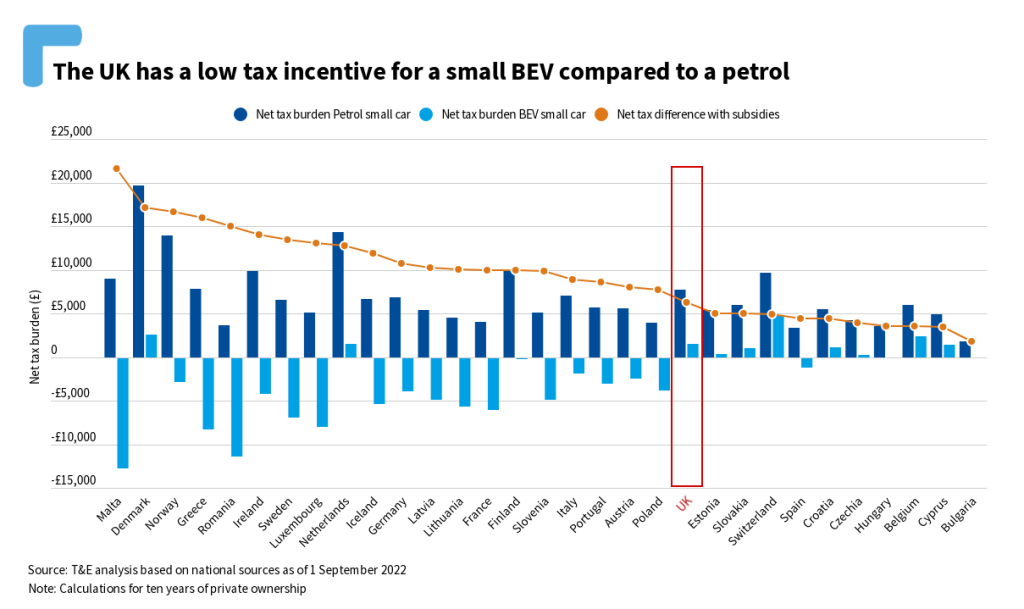 Ralph Palmer, electric fleets lead at T&E UK, said: “The UK Government’s proposed ZEV Mandate will put the UK on the right track to secure supply of EVs and help drive down prices in the long run. But with the Plug-In Car Grant now gone, the Government should reform its tax policy to ensure the UK doesn’t continue to fall short of its European neighbors in providing the incentives Brits need to switch to electric.”

On the other hand, the UK’s company car tax regime has been incredibly beneficial for the uptake of BEVs for corporate buyers. This is due to a low benefit-in-kind tax for BEVs. When an employer provides a company car to an employee, and this car is used for private purposes by the employee, a taxable benefit-in-kind arises. Higher BIK on polluting cars means more punitive taxation. The UK applies a BIK rate that linearly increases based on car emissions – a system unique in Europe that has proven very successful. This should be replicated for Vehicle Excise Duty for passenger cars.

The UK introduced a 0% benefit-in-kind rate for zero-emission vehicles in 2020, which increased to 1% for the 2021 tax year and 2% for 2022. This has provided a strong incentive for employees to opt for electric cars with BEVs accounting for 20% of new company car registrations in the first quarter of 2022, and a whopping 84% of salary sacrifice orders. Meanwhile, uptake of BEVs in the private market lags well behind at 10%. 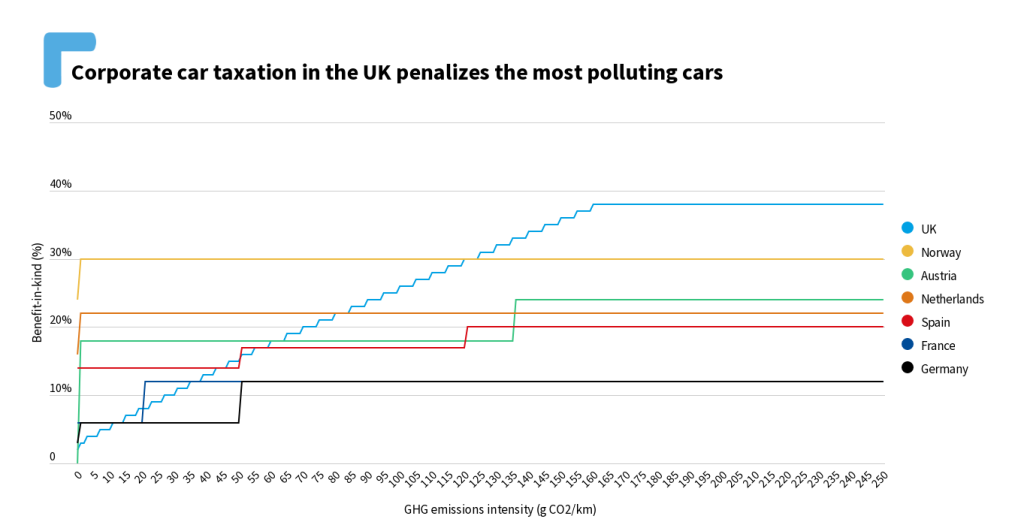 The UK has phased out purchase grants for electric cars. The government now has a clean slate to identify tax policies that support the uptake of BEVs for the next few years. The Treasury should set out plans for a system that incentivises BEVs at the point of purchase, by continuing to raise taxes on emitting cars, T&E says.

Raising first year Vehicle Excise Duty (sometimes known as a “showroom tax”) on emitting cars would help ensure that the most polluting vehicles – which have a higher social cost including air pollution, higher levels of CO2 emissions and which are being committed to the roads for the next 15 years – are priced more appropriately. Raising the VED would also bring in additional tax revenue. Conscious that BEVs cannot enjoy a no-tax status forever, T&E recommends introducing and increasing taxes on BEVs, whilst ensuring that the gap between BEVs and emitting cars is increased to keep a clear financial incentive for cleaner vehicles. Raising first year VED would only impact the purchase of new vehicles, which tend to be bought by people with higher incomes.

Ralph Palmer said: “The UK is often seen as a tax innovator but this perception is at risk as the UK fails to use the tax system to incentivise households to buy cleaner vehicles. But we do have a first class system to incentivise clean cars in the corporate channel. Applying the polluter pays principle and raising first year taxes on new emitting cars should be a no brainer to encourage new car buyers to go electric. ”

Transport & Environment has just published The Good Tax Guide, the first ever report comparing systems of car taxation across European countries. The comparisons in the report cover 31 countries, seven forms of taxation, and two registration types (private and corporate).