British Airways is the second biggest airline polluter in Europe. Its flights emit some 18.4 million tonnes of CO2: similar to the emissions from all the vans on the UK’s roads.[2] EasyJet UK and Virgin Atlantic ranked 7th and 8th in the polluters’ table, with 4.8 and 4.2 million tonnes of CO2 respectively. Both airlines each produce more emissions than all of the UK’s buses and coaches combined. 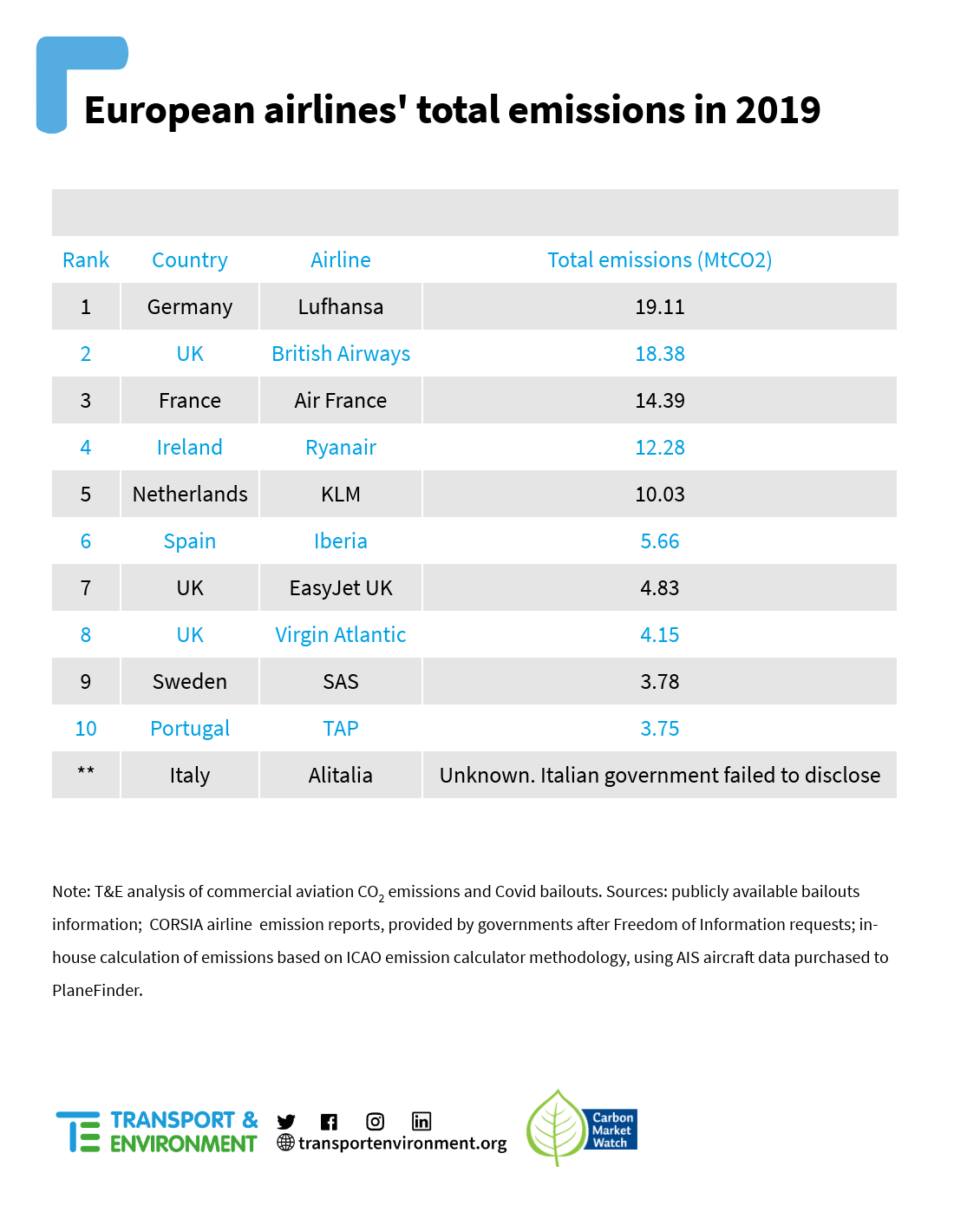 Matt Finch, UK policy manager at T&E, said: “The UK’s aviation industry has an emissions addiction. Total CO2 pollution from UK international flights is the same as all of the UK’s vans and trucks. Now that the cat is out of the bag, we need a coherent plan to ensure that as the lockdown eases and flights increase, aviation does not derail the UK’s commitment to meeting its climate goals. 2019 should come to be seen as the peak in UK aviation emissions.”

Most aviation emissions are entirely unregulated. Under a global agreement, the Carbon Offsetting and Reduction Scheme for International Aviation (Corsia), airlines can pay to offset growth of carbon pollution. But a new European Commission study found that Corsia would be “unlikely to materially alter” the climate impact of air travel.

The limitations of Corsia are recognised by the government’s independent climate advisors, the Climate Change Committee (CCC). The CCC has recommended formally including emissions from international aviation and shipping in future carbon budgets. This would open the door to make sure that the UK implements its own actions to cut aviation emissions alongside Corsia. The UK government will imminently decide whether or not to accept the recommendation.

How to manage the UK’s aviation greenhouse gas emissions within the UK’s 2050 net-zero target is creating a major headache for the Department for Transport, which appears to have removed proposals to cut aviation emissions from its long overdue Transport Decarbonisation Plan.

[1] This is the first time international CO2 emissions of major European airlines – from extra-European and intra-European flights – have been compiled. T&E was granted access to the international emissions data by a number of EEA governments. However, as the Italian government failed to provide data, despite repeated requests, Alitalia’s total emissions remain unknown. Ryanair remains the No 1 emitter on flights within Europe.