Uber is far behind on its pledge to electrify half its rides across seven European capitals, new data shows. Less than 5% of kilometres driven on the platform are in fully electric vehicles, according to Transport & Environment’s (T&E) analysis. Uber’s switch away from polluting vehicles is much faster in cities that require companies to electrify than in those with few or no requirements. T&E said it demonstrates to leaders meeting at the COP that corporate pledges are not enough. If politicians don’t set ambitious targets, transport providers will be slow to go zero emissions. 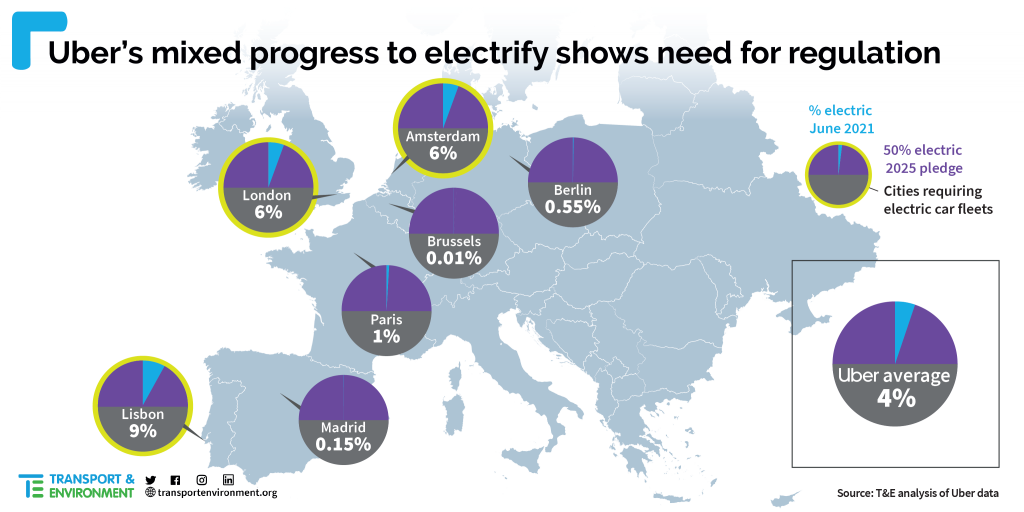 Lisbon, London, and Amsterdam have the highest rates of electric rides on the Uber platform, between 6 and 9%. But Paris, Madrid, Berlin and Brussels are lagging behind, with almost no electric cars on offer for passengers, data obtained from Uber shows. Uber has done better where it already had to – the Portuguese, British and Dutch capitals require company operations to go electric between now and 2025. Where no regulatory push yet exists – in Brussels or Berlin – Uber has done little to progress.

Saul Lopez, electric fleets program manager at T&E, said: “Over a year after its big electric pledge, Uber’s progress looks bleak. This should serve as a lesson to leaders meeting in Glasgow. Corporate pledges are no substitute for governments at all levels taking measures to defend their citizens’ health and the climate.”

Last year Uber announced half of its rides across the seven cities would be emissions-free by 2025, following the #TrueCostOfUber campaign by T&E and other groups. But the average emissions of its trips have fallen by just 6%, to 97.2 gCO2/km, in 18 months, the data shows.

Uber has a little over three years left to reach 50% electric rides. But its target is an aggregated percentage across the seven cities, which means that if London and Amsterdam both reach 100%, Brussels and Berlin can stay at zero. To ensure Uber cleans up everywhere, city authorities should require all high-mileage fleets operating in urban areas to be made of zero-emission vehicles from 2025. City and national governments must also improve charging infrastructure to ensure that slow and affordable charge points are available near drivers’ homes, in combination with city fast-charging hubs.

Saul Lopez said: “Uber should be doing more but so should governments. In Amsterdam and London it’s cleaning up its fleet faster because the authorities have set up electrification mandates and effective ultra low emissions zones. Clear targets for having zero-emissions fleets will give transport operators and charging providers the certainty they need to invest.”