The tool draws on the most up-to-date data to allow users to compare the vehicles in several different scenarios based on vehicle segment, where the battery was produced, and in what country the car was driven. The tool also allows users to compare cars driven in 2020 and 2030, when the EU electricity grid will be even cleaner. 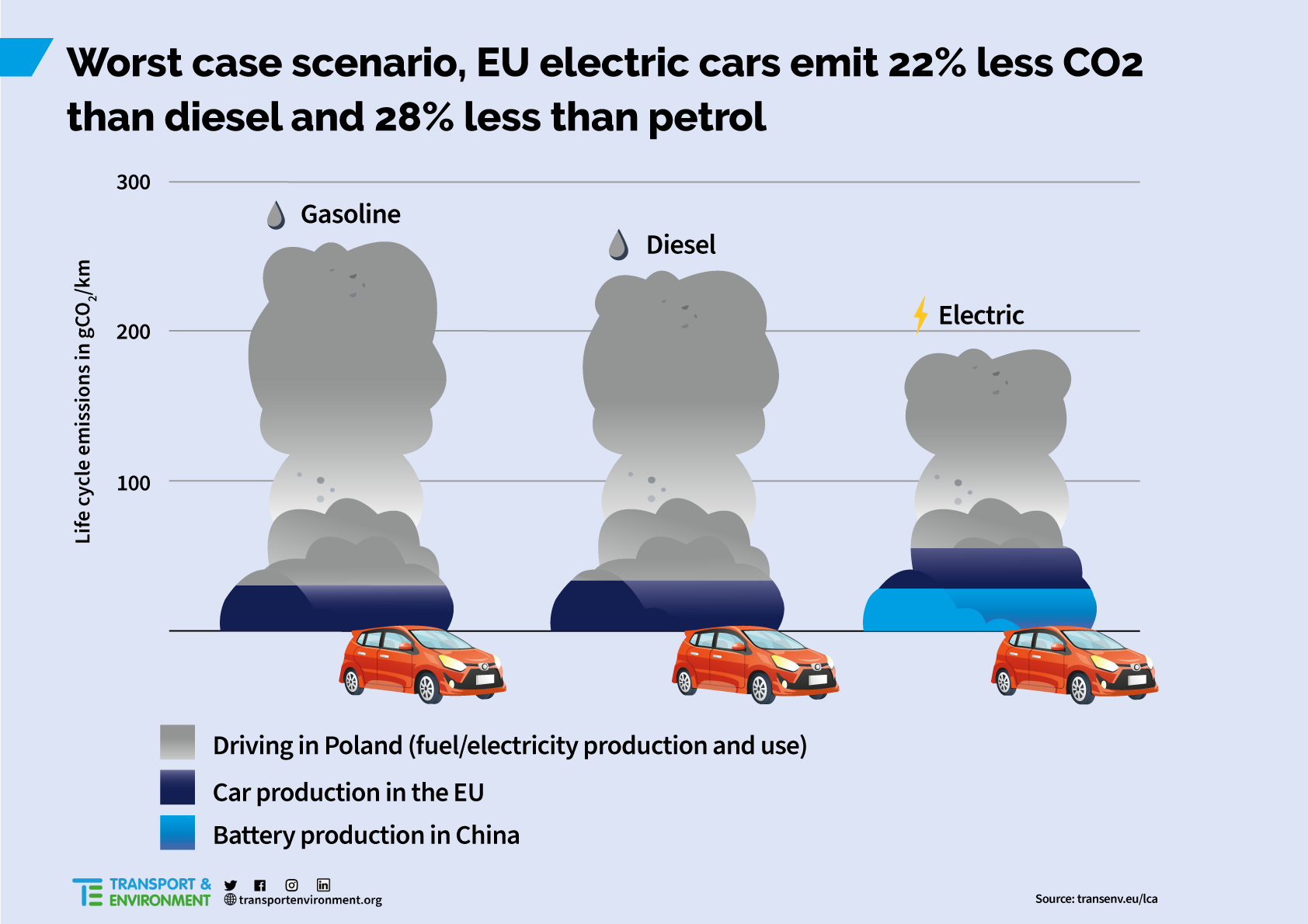 T&E’s transport and emobility analyst, Lucien Mathieu, said: ‘This tool puts to rest the myth that driving an electric car in Europe can be worse for the climate than an equivalent diesel or petrol. It’s simply not true. The most up-to-date data shows that electric cars in the EU emit almost three times less CO2 on average.

‘Electric cars will reduce CO2 emissions four-fold by 2030 thanks to an EU grid relying more and more on renewables. If European governments are serious about decarbonising during the crisis recovery, they must speed up the transition to electric vehicles.’

The tool’s findings are echoed by a new study that says electric cars lead to lower overall CO2 emissions, even if the electricity used to power them comes from fossil fuel generation. It finds that more carbon is emitted in the manufacture of e-vehicles than of internal combustion engine cars, but over a lifecycle the benefits are heavily in favour of electric, by up to 70% in countries with decarbonised power generation.

With cars emitting a sizeable proportion of global greenhouse gases, e-vehicles are increasingly seen as the solution, and are being promoted by the EU. However, there have been suggestions that, when cradle-to-grave emissions are taken into account, including emissions from generating the electricity that powers e-vehicles, EVs perform no better than petrol and diesel cars, and sometimes worse. 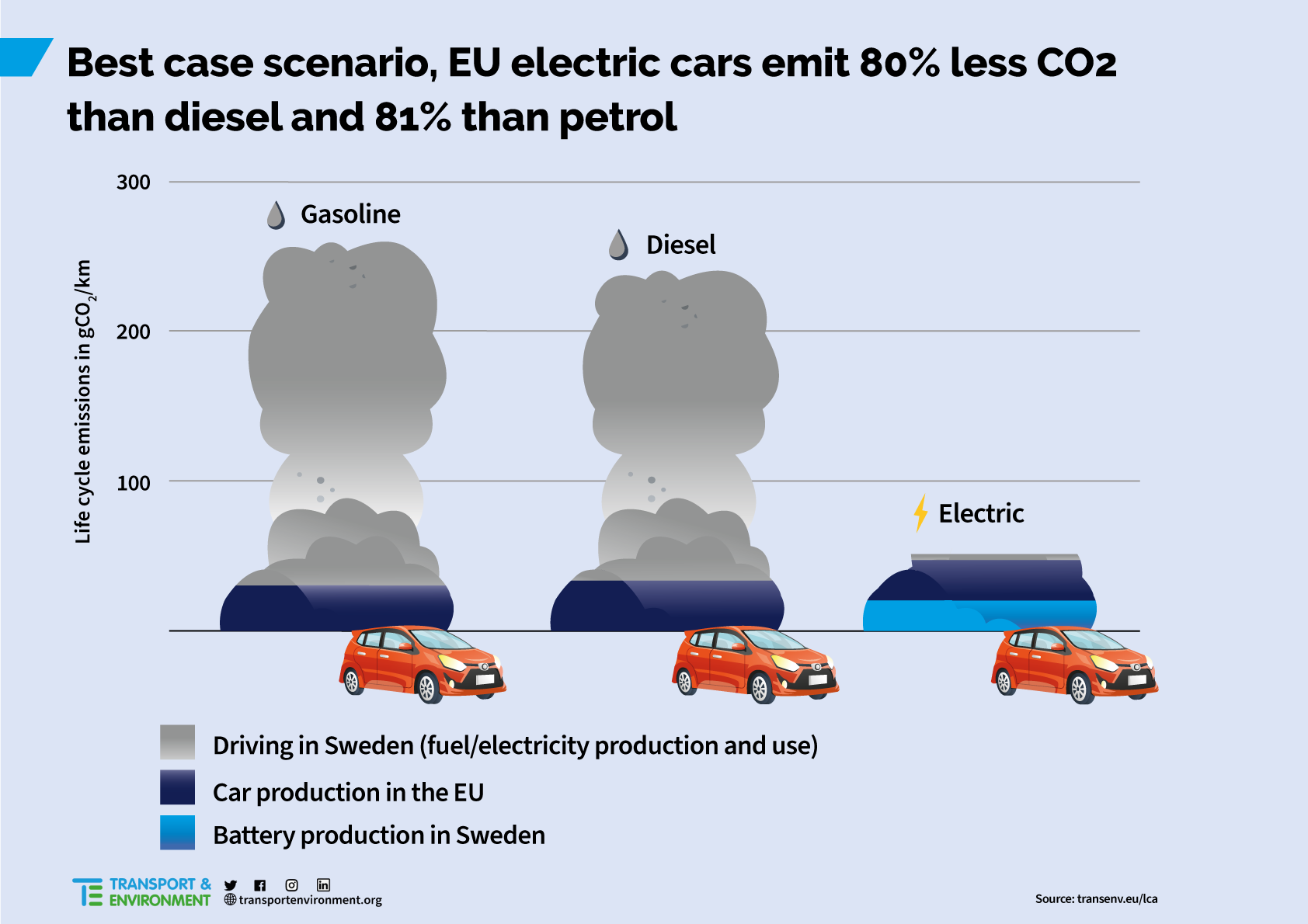 Now an independent study by academics from the universities of Nijmegen, Exeter and Cambridge has analysed current and future emissions trade-offs involving electric cars and household heat pumps in 59 world regions. The authors find that ‘current and future life-cycle emissions from EVs and heat pumps are on average lower than those of new petrol cars and fossil boilers—not just on the global aggregate but also in most individual countries [53 out of 59]’.

The study, published in the Nature Sustainability journal, specifically addresses the current carbon intensity of electricity generation. It concludes that, even now, electric cars and heat pumps are less emissions-intensive than fossil-fuel-based alternatives in all but the most coal-dependent of countries like Poland. T&E analysis shows that EVs are cleaner in Poland because it relies on more recent evidence. On the other hand, the study published in Nature was submitted more than a year ago – before the Europe Green Deal and prior to recent authoritative evidence that batteries have gotten two to three times cleaner.

The report says: ‘Even if future end-use electrification is not matched by rapid power-sector decarbonisation, it will probably reduce emissions in almost all world regions.’ And it cites Sweden, a country using electricity mostly from renewable sources, as standing to make CO2 savings of around 70% on e-vehicles over petrol and diesel.

The lead author of the study, Florian Knobloch of Nijmegen university, told the Guardian: ‘The idea that electric vehicles or heat pumps could increase emissions is essentially a myth. We’ve seen a lot of disinformation going around. Here is a definitive study that can dispel those myths.’

The one area where EVs score less well than traditional cars is in the production process, where emissions are currently around 30% higher for EVs than for petrol cars (at the average global electricity mix). The authors therefore warn about a possible short-term increase in emissions during the time-lag between producing EVs and reaping the overall benefits of them emitting fewer gases over their lifetime.