Cruises docking in Barcelona are spewing out five times more SOx than the city’s 560,000 cars every year, according to the T&E study, which is based on satellite data of ship movements. Palma Mallorca (Spain) and Venice and Civitavecchia in Italy are the next worst hit, with Southampton in England the fifth worse for SOx emissions from cruise ships. These emissions form sulphate aerosols and fine particles that harm human health and cause acid rain and acidification of the seas.

T&E said these ports and their countries are so exposed because they are major tourist destinations, where cruise ships make prolonged port calls. 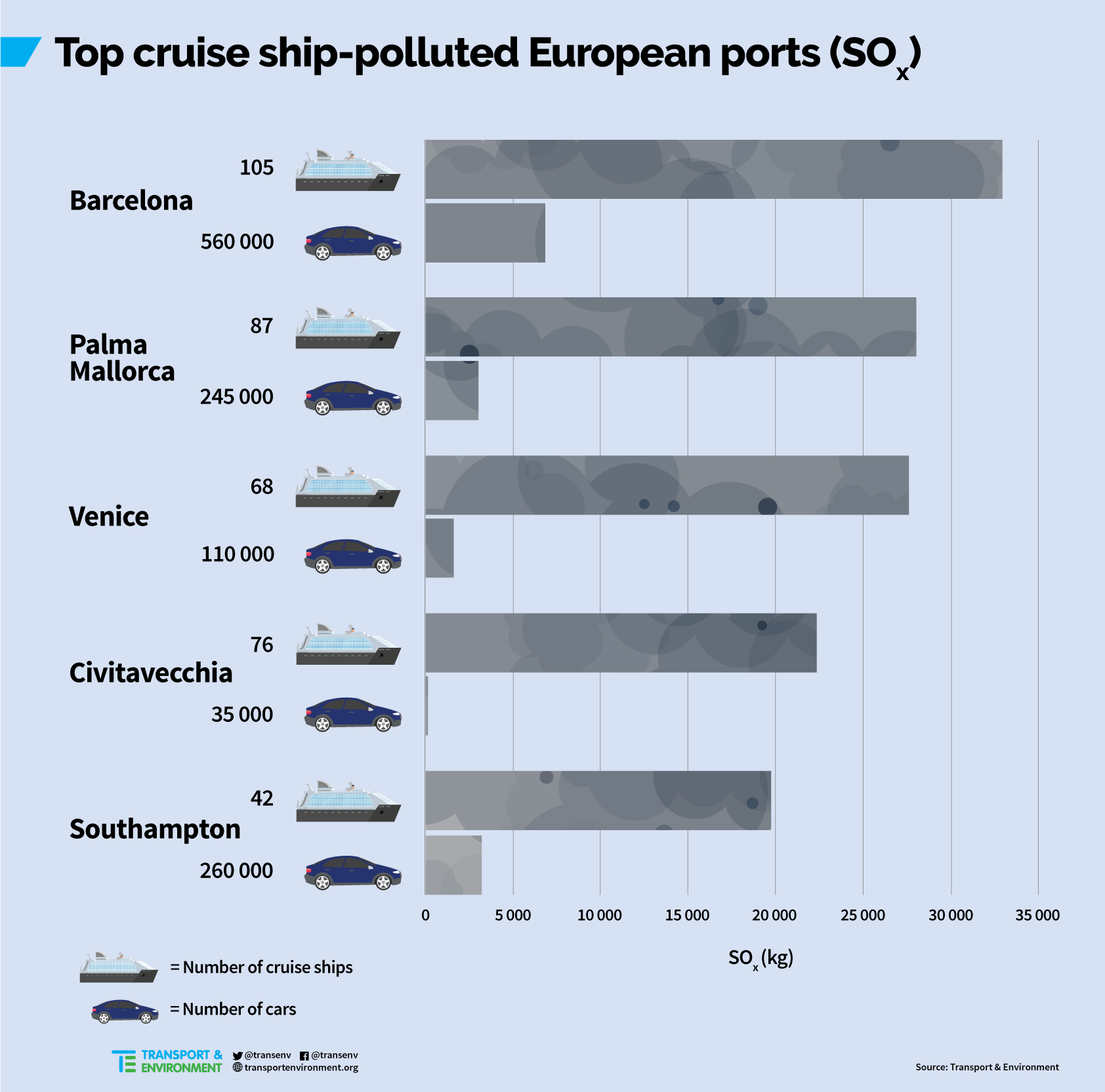 T&E’s shipping policy manager, Faig Abbasov, said: ‘Luxury cruise ships are floating cities powered by some of the dirtiest fuel possible. Cities are rightly banning dirty diesel cars but they’re giving a free pass to cruise companies that spew out toxic fumes that do immeasurable harm both to those on board and on nearby shores. This is unacceptable.’

Cruise ships also belch out poisonous nitrogen oxides (NOx) equivalent to 15% of Europe’s car fleet every year. In Marseille, where 57 cruise ships called in 2017, they emitted almost as much NOx as one-quarter of the city’s 340,000 passenger cars. SOx, ultrafine particles (PM2.5) and NOx cause premature death, including from lung cancer and cardiovascular disease, and lead to childhood asthma.

Diesel cars have been the focus of the air pollution crisis in Europe’s cities, but along the coasts of countries such as Norway, Denmark, Greece, Croatia and Malta a handful of cruise ships are responsible for more NOx than the majority of their domestic car fleets.

The next European Commission will face calls to implement a zero-emission port standard for cruise ships as soon as possible, and then extend it to other ship types. T&E also recommends extending low emission control areas (ECAs), currently in place only in the North and Baltic Seas and English Channel, to the rest of the European seas. Furthermore, the report recommends turning low emissions control areas into zero emission control areas to equally address air pollution and GHG emissions.

T&E said the new global standard for low-sulphur fuel, to be implemented from 2020, is welcome but won’t bring an improvement in ports as high-sulphur fuel is already banned there for cruise ships.

Faig Abbasov concluded: ‘There are enough mature technologies to clean up cruise ships. Shore-side electricity can help cut in-port emissions, batteries are a solution for shorter distances and hydrogen technology can power even the biggest cruise ships. The cruise sector are apparently not willing to make the shift voluntarily, so we need governments to step in and mandate zero emission standards.’