Almost two-thirds of new car buyers are willing to pay up to €500 extra – the maximum cost to manufacturers of significantly reducing car air pollution – new polling in Germany, France, Italy and Spain shows.

YouGov, commissioned by T&E, surveyed people in Poland, Romania and Czechia too and found that Europeans overwhelmingly support tougher air pollution standards, even if it comes at a price. The poll sampled the views of more than 8,000 people. 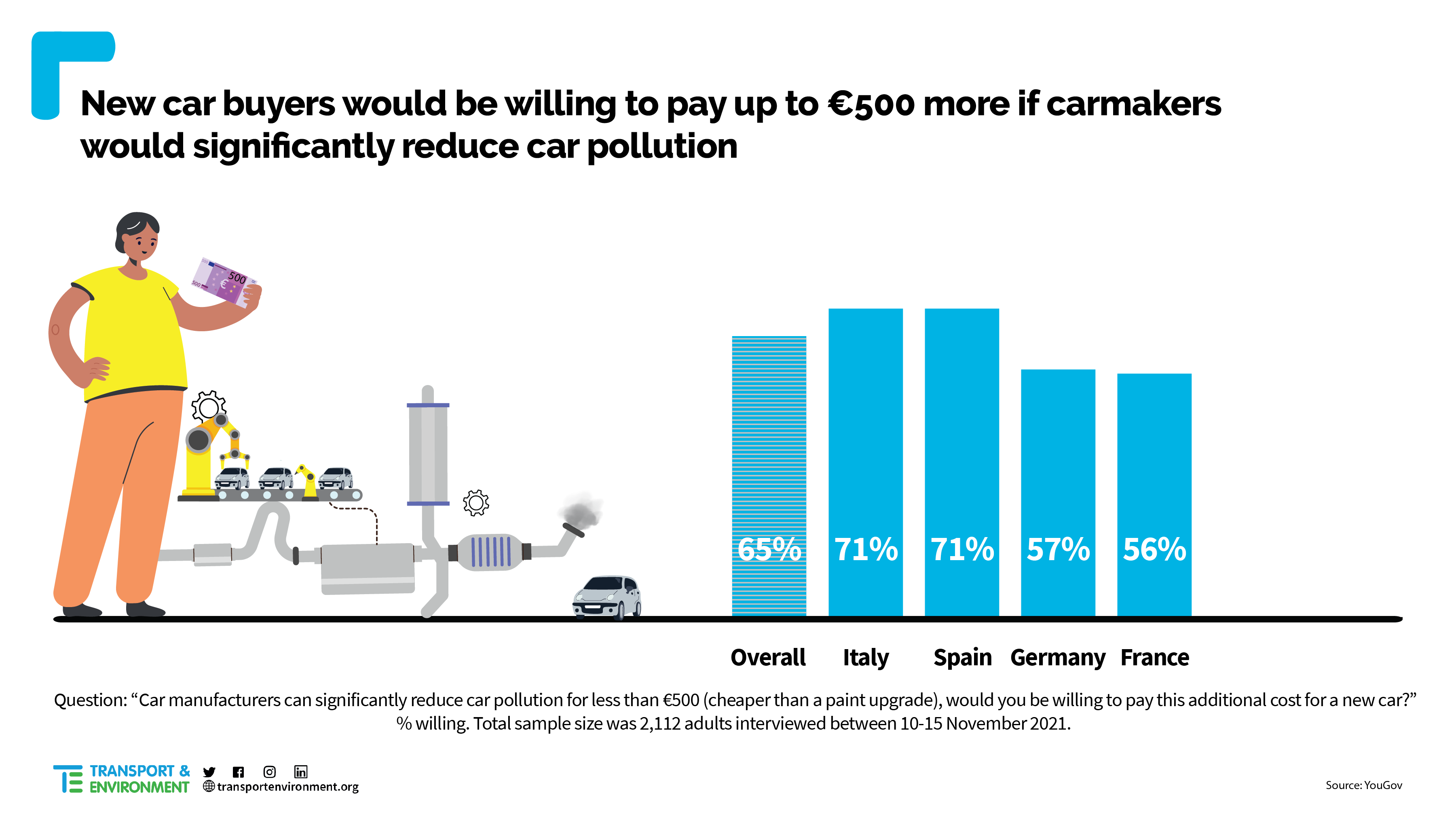 Fabian Sperka, vehicles policy manager at T&E, said: “Consumers are willing to pay more for cleaner cars and cleaner air in our cities. This undermines one of the key pillars of the automotive industry’s arguments against tighter emission standards.”

The EU Commission is weighing up proposals for new rules on car emissions that would help improve the appalling air quality in many European cities, which cause tens of thousands of premature deaths every year. It estimates the cost would range from €100-€500 per car. But the car industry fears cleaner vehicles will hit their profit margins and are lobbying to weaken the new rules.

A large majority of those polled said they support stronger EU air pollution rules for carmakers to make vehicles as clean as possible. More than three-quarters said that manufacturers should be legally obliged to reduce emissions from new cars as much as technically feasible.

This also applies to used cars. Half of those polled said they would still expect the vehicle to meet a minimum legal pollution limit. Only a small minority (12%) would not expect this when buying a used car.

Monitoring the ‘real world’ emissions of cars throughout their lifetime on the road is being considered by the EU Commission. Currently, new cars are only checked during their first five years, or 100,000km, although the average car in the EU is 11 and a half years old . Many cars stay on Europe’s roads much longer, especially in southern, central and eastern Europe, exposing millions of people to highly polluting vehicles. 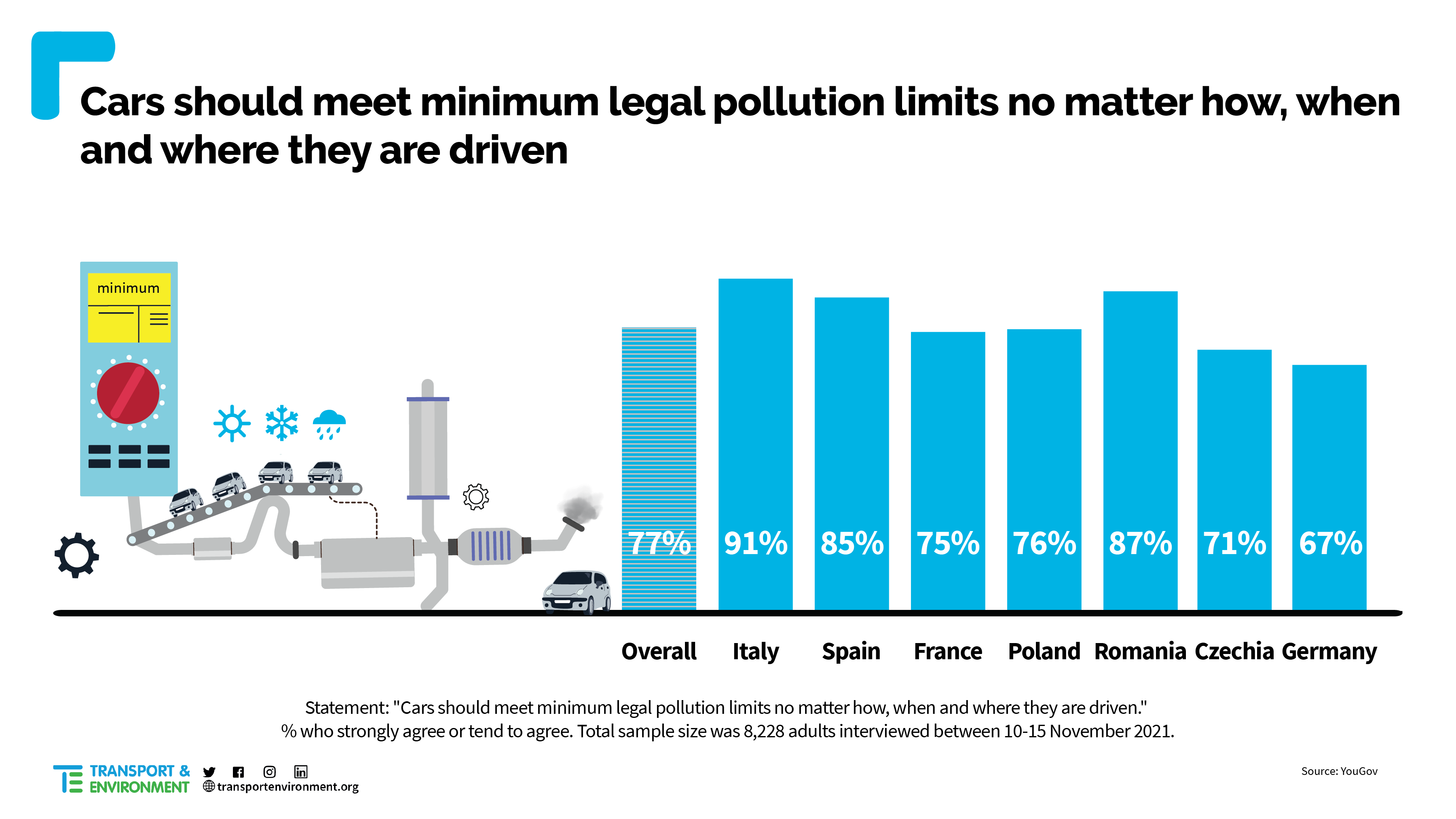 This comes as the EU Court of Justice told the cities of Brussels, Paris and Madrid that they have no right to challenge the European Commission’s and member states’ attempts to set technical standards on vehicle emissions as part of efforts to curb pollution.

The three cities – which are blighted by high air pollution levels – had contested an earlier decision by the Commission and member states that allowed carmakers to keep breaking nitrogen oxide pollution limits as they shifted to a new testing system introduced after the Dieselgate scandal.

The EU’s General Court initially backed the cities, forcing the Commission to take its case to the European Parliament and Council for discussion.

The EU Court of Justice has now overturned the earlier decision, reasoning that the issue doesn’t directly impact the local authorities involved.

“Since the cities of Paris, Brussels and Madrid are not directly concerned by that regulation, their actions seeking its annulment must be dismissed as inadmissible,” the court said in a statement.

Green groups, including T&E, have slammed the decision. “This leaves in place the license to pollute awarded to carmakers behind closed doors in 2016,” T&E’s Fabian Sperka told Politico. “Lawmakers must resist any watering down of the plans for a tougher Euro 7 air pollution standard which will affect Europe’s air quality for a generation” he concluded.