A large majority of people support stronger EU air pollution rules for carmakers to make vehicles as clean as possible, a new YouGov survey shows. More than three-quarters (76%) of those polled said, when asked, that manufacturers should be legally obliged to reduce emissions from new cars as much as technically feasible. YouGov, commissioned by Transport & Environment (T&E), surveyed more than 8,000 people in seven EU countries: Germany, France, Italy, Spain, Poland, Romania and Czechia. 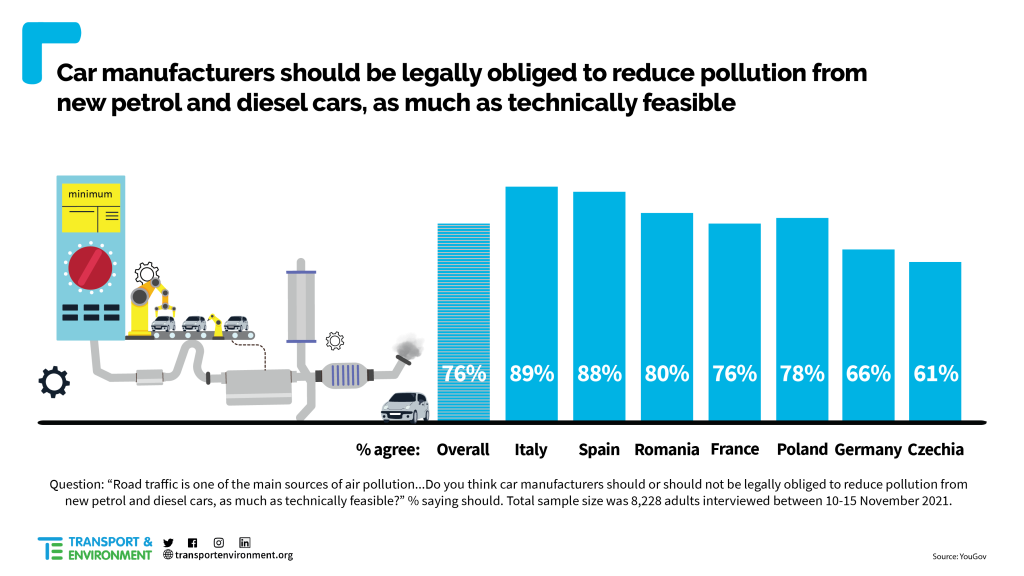 Almost two-thirds (65%) of those surveyed who would buy a new car are willing to pay up to €500 extra – the maximum cost to manufacturers of significantly reducing car pollution. The EU Commission is weighing up proposals for new rules on car emissions that would help improve the appalling air quality in many European cities, which causes tens of thousands of premature deaths annually. The Commission estimates the cost would range from €100-€500 per car, but the car industry fears cleaner vehicles will hit their profit margins and are lobbying to weaken the new rules.[1] 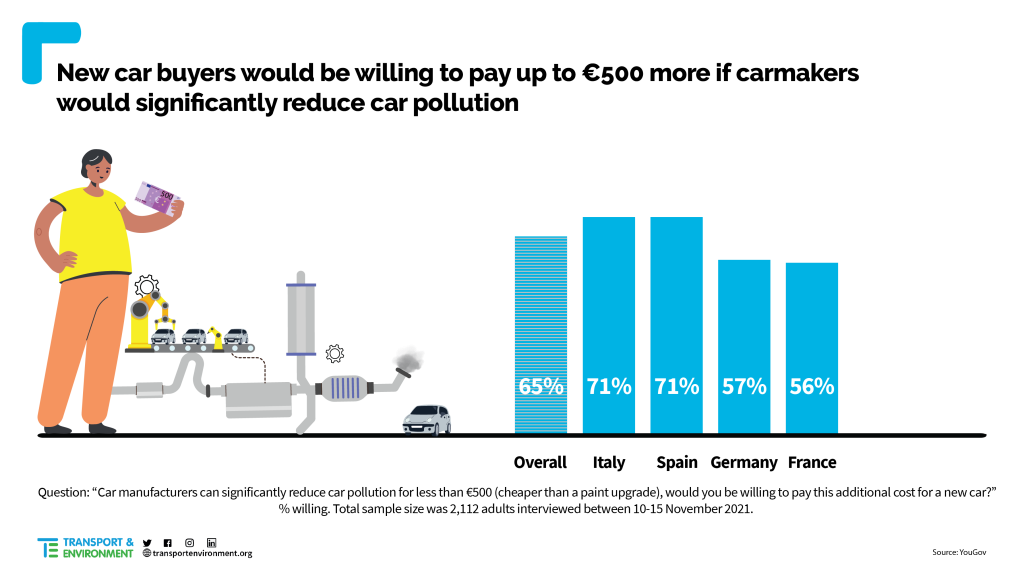 Fabian Sperka, vehicles policy manager at T&E, said: “The car industry claims cutting a vehicle’s emissions is too expensive when in reality it will cost less than a paint job. But the public wants the cleanest cars possible and now they’ve called carmakers’ bluff by saying they’re prepared to pay.”

Even if buying a used car, half (50%) of those polled said they would still expect the vehicle to meet a minimum legal pollution limit. Only a small minority (12%) would not expect this when buying a used car. Monitoring the ‘real world’ emissions of cars throughout their lifetime on the road is being considered by the EU Commission. Currently, new cars are only checked during their first five years, or 100,000km. Many cars stay on Europe’s roads much longer, especially in southern, central and eastern Europe, exposing millions of people to higher emitting vehicles.

There is also broad support for carmakers being required to reduce vehicle emissions at all times and not just under ideal driving conditions. More than three-quarters (77%) of people surveyed agree that cars should meet minimum legal pollution limits no matter how, when and where they are driven.[2] Current pollution limits do not apply on short city trips – when cars stop and start more frequently – or when accelerating fast, despite the engines emitting more.

Fabian Sperka said: “Keeping pollution down for just five years when most cars stay on the road for far longer is a threat to public health. People want to know that emissions will be kept within legal limits whether they’re buying a new or used car. Manufacturers should be required to ensure that.”

In April, the EU Commission is expected to propose new ‘Euro 7’ rules, which will set legal limits for almost 100 million petrol and diesel cars that will be sold in Europe after 2025. Cutting air pollution is a top priority of the EU Green Deal and the Commission is currently considering recommendations for the standards after convening independent experts to review the best available technology.

Road transport emissions are a major source of air pollution, causing a wide range of serious illnesses including heart and lung diseases and cancer. Every year in the EU road transport pollution is responsible for tens of thousands of premature deaths, costing society tens of billions in health costs. Poor air disproportionately impacts low income households and minorities.

[2] In response to the following question, 48% of respondents “strongly agree” and 29% “tend to agree”: “To what extent do you agree or disagree with the following statement? ‘Cars should meet minimum legal pollution limits no matter how, when and where they are driven.’”