When it comes to soy, another major driver of deforestation worldwide, more than half of Europeans polled (52%) support stopping the use of soy in diesel fuel, while only 18% want to keep using it. 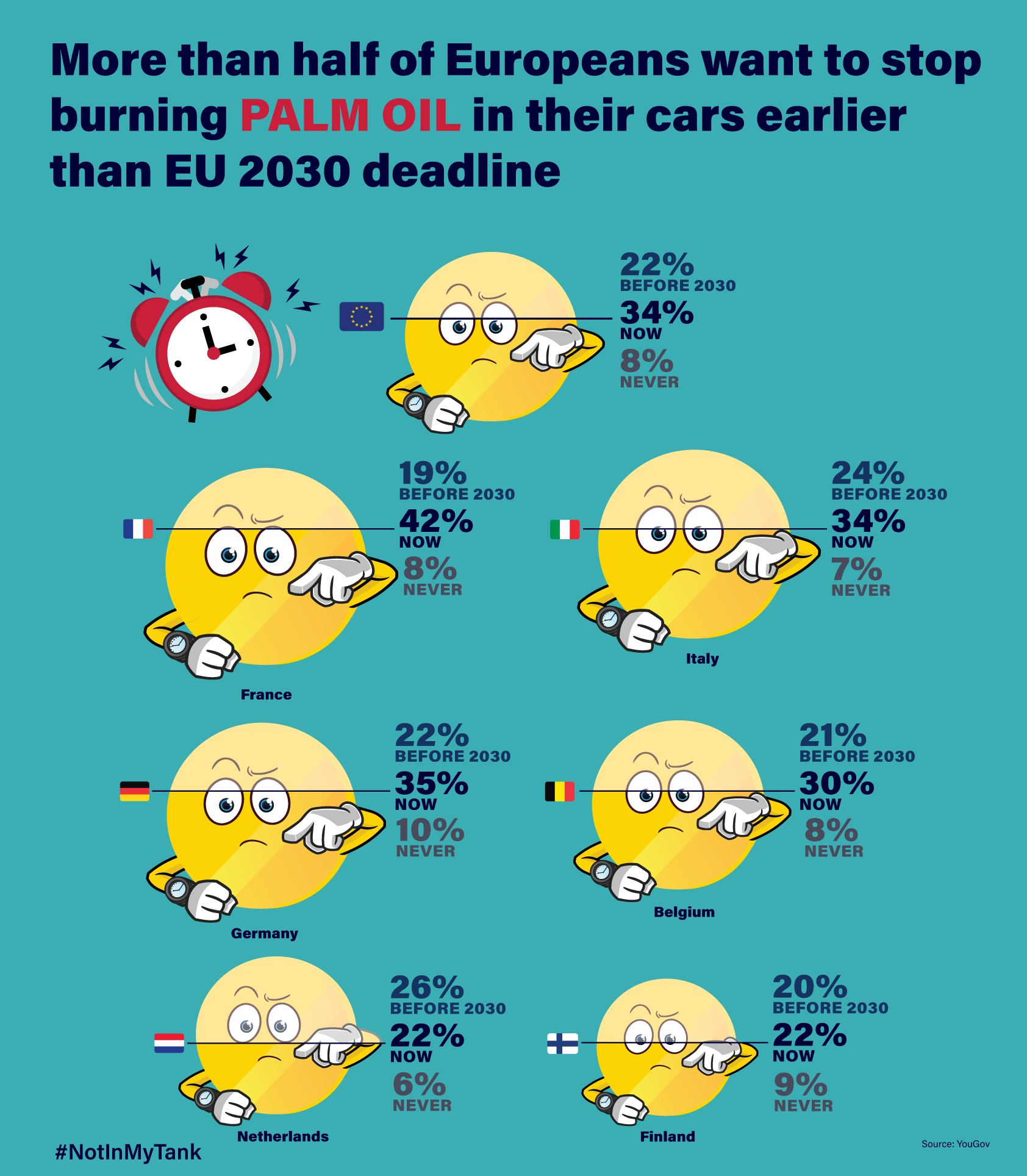 The poll suggests strong public support for European governments to take bold action and immediately stop the promotion of palm and soy oils in diesel fuels when transposing the EU Renewable Energy Directive into national law.

Last year the European Union labelled palm oil diesel unsustainable and stated that it should not receive public support because it causes deforestation. According to the  Renewable Energy Directive II, the use of palm oil in diesel will be gradually reduced from 2023 and should reach zero in 2030, with some exemptions. This law doesn’t phase out soy oil but allows member states to be more ambitious and stop the promotion of palm oil earlier and include soy oil in the phase-out.

Cristina Mestre, biofuels manager with Transport & Environment (T&E), said: “The madness of burning food in cars should stop as soon as possible. This failed biofuels policy drives deforestation, worsening climate change, and threatens both indigenous communities and endangered species. EU leaders have a once-in-a-generation opportunity to phase out all food-based biofuels including palm oil as of next year.”

According to the poll, there’s almost no public awareness about burning forest-ravaging vegetable oils in diesel engines across Europe. Four in five Europeans didn’t know diesel fuel in their country contained palm oil and soy oil before taking the survey. The lack of knowledge may change next year as oil companies are obliged to report the feedstocks used to make biodiesel and ethanol.

According to a study for the European Commission, biodiesel from palm oil is three times worse for the climate than regular diesel when indirect emissions are accounted for. Soy diesel is two times worse.

Europe is the world’s second largest importer of palm oil. The forest-ravaging oil comes predominantly from Indonesia and, to a lesser extent, from Malaysia – two countries with notable deforestation rates in the past two decades.

In contrast, the use of palm oil to make everyday products such as bread, ice cream, hazelnut spread, chocolate, margarine, shampoo and detergent dropped to an all-time low of 2.8 million tonnes. This is because the European biofuels policy, enacted in 2009, mandates oil corporations to mix biofuels with fossil fuel to supposedly make cars ‘greener’.

This worrying trend can be observed across many edible oils. In the last 10 years, the use of rapeseed, sunflower, soy and palm oil to make food has stagnated at around 12 million tonnes per year. But their use in ‘bio’-diesel has jumped 46%, from 8 million tonnes in 2009 to 11.7 Mt in 2019.

[1] All figures, unless otherwise stated, are from YouGov Plc. Total sample size was 9,361 adults. Fieldwork was undertaken between 2nd – 7th September 2020 in seven European countries: Belgium, Finland, France, Germany, Italy, The Netherlands and Spain. The survey was carried out online. The figures have been given an even weighting for each country to produce an ‘average’ value of European adults 18+. The poll results for Spain will be released on 29 September by Spanish campaign partner Ecologistas en Acción.