Up until now, our analysis has shown that a combination of low hanging fruit measures and electrification of the fleet (dotted line in the figure below) could reduce greenhouse gas (GHG) emissions by 63% compared to a business-as-usual scenario (solid line below) in 2050. In this edition we show that the maximum availability of advanced biofuels (dashed line below) for road freight will only make a modest improvement to these measures over the same time. To calculate this, T&E used its new European Union Transport Roadmap Model (EUTRM). 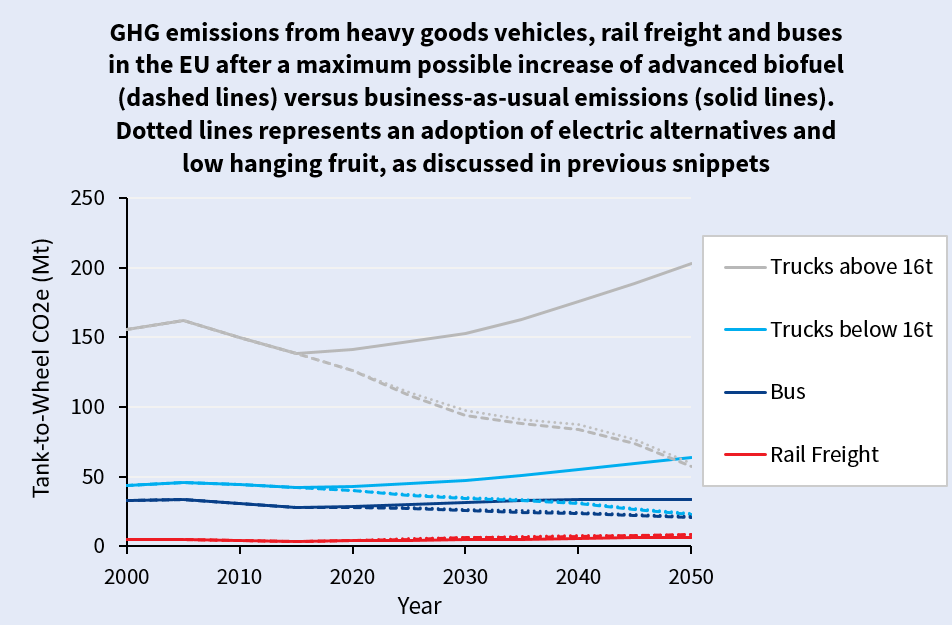 The potential GHG reductions are dependant on the amount of biofuels projected to be used in a business-as-usual scenario. The European Commission’s proposal caps the amount of first generation biofuels (more on those below) to 3.8%. As this is a cap and not a target, we assume they will no longer be supported, and market demand will be limited. In addition, the EU will have 3.6% of advanced biofuels on the market in 2030, and 1.7% of animal fat and used cooking oil based biofuels as proposed by the European Commission in the recast of the renewable energy directive. Thus, there is already a significant blend of biofuels expected to be in our fuel, which we consider already too high. For our trajectory case, where we aim to realise the maximum potential of these fuels, we assume that advanced biofuel mix could technically (although not necessarily sustainably) reach 8.5% of heavy-duty liquid fuel demand. We find that such a volume of advanced biofuels can reduce GHG emissions in road freight and buses by around 4% compared to a business-as-usual scenario.

There is an important difference between the types of biofuels on the market: first generation (or conventional) biofuels are produced from crops grown on agricultural land whereas second generation (or advanced) biofuels are produced from wastes, residues or novel feedstocks such as algae. Biofuels can be blended into fossil fuels without the need to modify engine technology, though for some types blending limits exist.

The first generation of crop based biofuels were first introduced in the hope of reducing fuel carbon intensity, as in a simplistic sense the CO2 generated by combustion, that is the tank-to-wheel emissions as shown above, is absorbed by the regeneration of the crops used to make it. However, in the context of diesel fueled heavy duty vehicles for road transport, vegetable oil based biodiesels (such as palm oil) typically have higher greenhouse gases than fossil derived diesel if we consider their indirect land-use change (ILUC) emissions.

The raw materials used for advanced biofuel are mainly derived from wastes and residues from agriculture, forestry, and food industry sectors. There are two key aspects that will limit the uptake of these fuels for road freight, namely the availability of the raw materials and the competing sectors for the biomass in a potentially growing bioeconomy including the other transport sectors that are under pressure to decarbonise, such as shipping and aviation, that will no doubt compete for these scarce resources.

Advanced biofuels can play a modest role in the decarbonisation of road transport, however their sustainable and economic viability will limit their impact, particularly compared to the reductions possible with combined fuel efficiency, logistics, modal shift, and electrification.