Renewable electricity is a must to decarbonise land freight transport

This is the fifth in a series of eight snippets about how to decarbonise land freight by 2050. Based on a new T&E study, the series will culminate in a public debate in Brussels in September.

Electrification as part of freight logistics could contribute to reducing land freight emissions by 2050 by an additional 27%, which in combination with the low-hanging fruit (dotted line below) discussed in previous snippets, could bring emissions down by 63% compared to a business-as-usual scenario. By 2050, not even the whole potential would be unleashed as the fleets would need longer to fully renew to achieve its maximum emissions saving potential. To calculate it, T&E used its new European Union Transport Roadmap Model (EUTRM) tool. 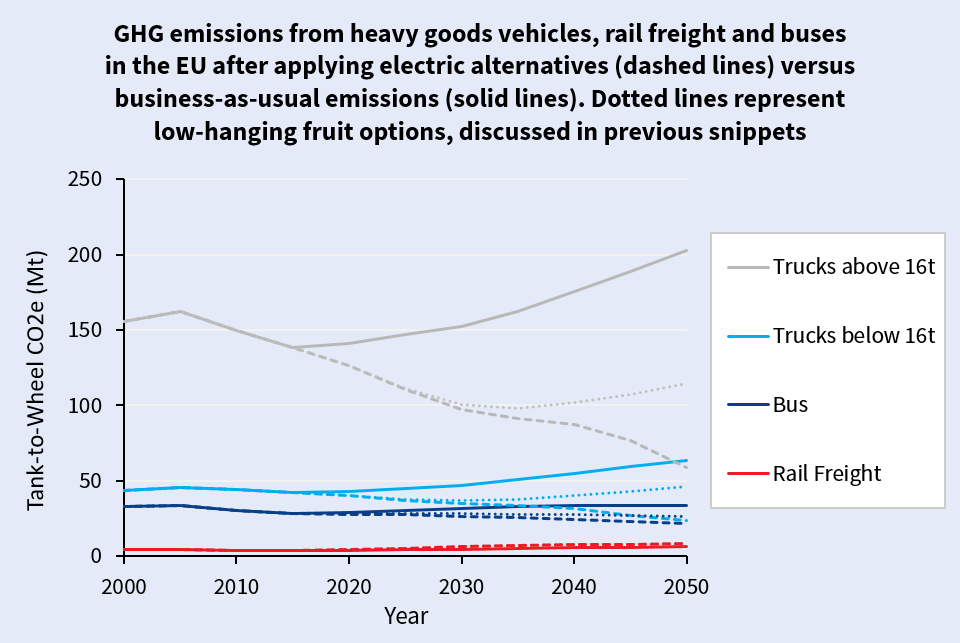 Full decarbonisation requires a shift to new technologies and energy carriers. To reach zero GHG emissions by 2050, renewable, decarbonised electricity is fundamental. Currently, battery electric vehicle technology is limited to small and medium trucks with short, urban mission profiles. Given the rapidly falling battery costs, predictable routes and easy overnight recharging, delivery trucks and urban buses can, and should, become fully electric. In our study we assumed that 60% of all new small trucks sold in 2050 could be electric. Another input was all new urban buses being fully electric by the same year.

Regarding larger trucks, e-highways could power long distance trucks with renewable electricity while they drive. The Siemens e-highway concept connects a hybrid electric truck with overhead lines through a pantograph (like a tram). This trolley truck concept is being tested in Sweden, Germany and California in cooperation with Volvo and Scania. Other electric highway options are also being developed, including in road conductive tracks. The technology which eventually wins however, would not change our underlying assumptions. By 2050, 40-60% of highway trucks could be e-highway trucks. The advantage of the e-highway system is its high efficiency, its flexibility, and the comparatively lower vehicle and infrastructure cost – since only a small part (initially the core) of the road network needs to be ‘electrified’. According to the German environment agency it is by far the most cost effective route towards zero/low emission trucking. We assumed that the first catenary trucks will find their way into the market from 2025. By 2050, 90% of all new long-haul registrations would be catenary trucks, and the relative share of electricity used by these hybrid trucks would also increase over time as battery technology improves.

Another argument to use as much direct electricity as possible is that it is significantly more efficient: by definition, less primary energy is needed than for other zero-carbon alternatives (see graph below). More details about hydrogen and power-to-liquid will be included in an upcoming snippet.

In order to unlock all this potential, a zero emission vehicle (ZEV) mandate/quota for buses and delivery trucks would be a first step in the right direction. The Commission is considering a ZEV mandate for urban buses, which should also include all delivery trucks. This should be complemented by zero-emission freight strategies for cities across Europe.

Building the right infrastructure is another key condition. Battery electric or e-highway trucks require infrastructure to operate. Based on current knowledge, battery charging in cities and e-highway infrastructure on highways appear to be the most promising investments. The EU should use its post-2020 transport budget lines to co-finance such projects and avoid spending on technologies which do not have the potential to decarbonise, like natural gas.
Road tolls could also play an important role in freight decarbonisation, because on the one hand the revenues could be used to develop the infrastructure, and on the other the proposed 75% discount on road tolls for zero emissions vehicles by the Commission as part of the Eurovignette review could also become a driver for these technologies.

You should include an additional loss for the battery electric option because of the extra-weight of the battery.
Ceteris paribus, a battery electric vehicle is significantly heavier than an ICE.
For BEVs, a 24% increase in weight is assumed in Timmers and Achten (2016), and this factor considerably worsen the non-exhaust emissions of these vehicles.

Your statements and the pictures used are somewhat astonishinig, linking to some doubts about good knowledge of the technics and economics of freight transport. The train you used in the opinion "Freight modal shift to rail can contribute to decarbonising land freight" is a North-American (probably in Canada) Canadian Pacific rail double stack DIESEL POWERED train roughly exceeding 8000 tons thanks to the automatic coupler. IT IS NOT AN EUROPEAN TRAIN. And with the EU Commission and a lot of NGOs deep sleeping about the coupler the freight rail traffic in Europe will be a dying mode. Overhead wires on highways will cost more than 1 million Euros for each lane only for poles and wires. Given the the low voltage mandatory for such installations (750Vdc) there will be a substation each 2 kms (another 2 millions each) and the number of trucks you can feed will be limited to 5 or 7 per km. Not mentioning the enviromental costs for the copper.
On the other hand overhead wires (in the 25 kVac version) for standar rail infrastructure costs around 500 kEuros for each track (and a track has a transport capacity of two highway lanes) with substations each 50 kms (less than 1,5 million each).
But the worst is: there will be still need for larger and more highways, and certainly of another lane for the e-trucks. Siemens is making research on such items (like others on Hydrogen busses, cars and trucks) since more than 35 years only on behalf of billions of taxpayers' money flowing to them, but without useful results.
The railways exist since 1825, but there are too much open and hidden subventions for the trucks. Eliminate all the subventions to the trucks and there will be a plain field for the railways, and you will see some miracles happen.

sorry for the typos: the costs I cited about electrifications are intended per km and lane fore the highway and per km and track for the railway. I apoligize.

I agree with Samanta Colli's comments, there is too much of a preoccupation with road transport. The increased levels of particulate pollution due to the additional battery weight affecting brake and tyre wear for electric trucks, as well as the vast amount of material required in the manufacture and recycling (I would hope) of batteries makes rail a better option. If electric trucks are carrying several tonnes of batteries then either the overall weight would go up as suggested or less freight would be carried per truck resulting in a larger number of trucks required for the same freight volume. Other considerations are the hidden costs of road damage caused by heavy goods vehicles and the congestion from traffic volume and frequent road repairs. In the UK a stubborn reluctance to further electrify the rail network and encourage the uptake of rail freight persists for reasons I can only put down to political ideology, short term thinking as well as ignorance along with a strong influence from the road hauliers.
There needs to be an economic incentive to switching to a less polluting form of freight transportation. Using for example European wide tax increases on Diesel and road use along with tax incentives to rail freight to shift the balance. Logistics companies could easily incorporate rail for the majority of the journey and use electric trucks only for the final part of the journey from a rail depot to the end destination. The hauliers would of course complain but they are already faced with a shortage of drivers and in reality there would be plenty of work to do the rail to end destination journeys.
Removing a significant percentage of freight off the roads would not only reduce direct pollution but would reduce congestion with it's associated costs and pollution too. Covering the landscape with ever more roads, even if carrying a growing proportion of electric vehicles is not the best solution, enhancing and better using the rail network could be so much more effective in reducing pollution and congestion.