Ride-hailing giant Uber is making slow-progress on its pledge to electrify, new analysis shows. The research carried out by T&E indicates that the decarbonisation of ride-hailing services in Europe’s cities is driven by regulation, and not by Uber’s promises. T&E says that announcements by companies of their intentions are no substitute for governments and city councils taking action to defend their citizens. 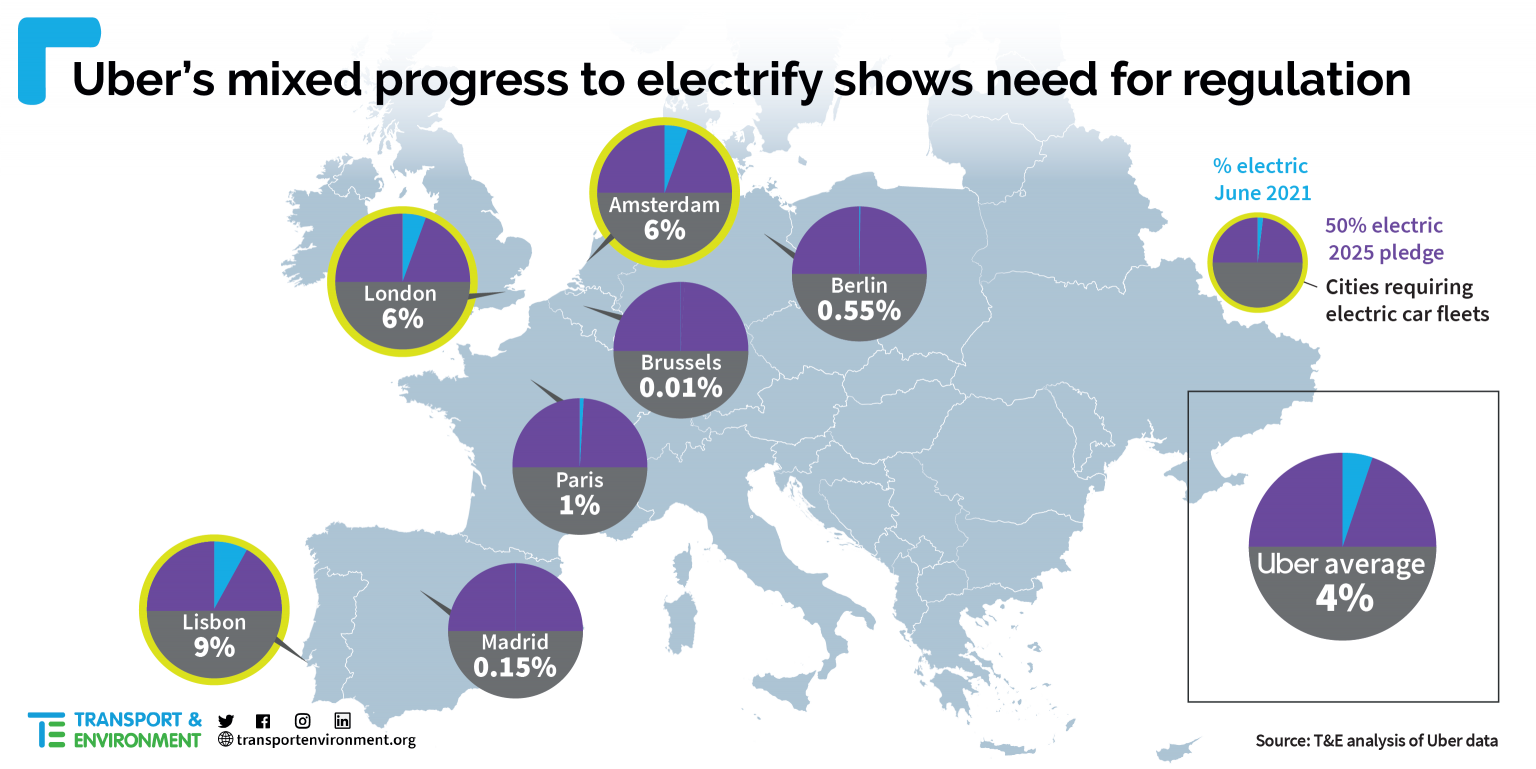 Ride-hailing has emerged over the past 10 years as an alternative means of transport to taxis, cars and public transport in urban areas. Companies like Uber, Lyft, Bolt and others have enabled private motorists to use their cars as taxis, and allowed people to order pre-paid lifts using online accounts and apps. But with evidence that ride-hailing companies are increasing congestion in the world’s cities, there has been pressure for them to decarbonise.

Last year T&E’s #TrueCostOfUber campaign highlighted how the growth of Uber and other ride-hailing services has gone hand-in-hand with an increase in greenhouse gas emissions in cities where Uber operates. It prompted Uber to promise that half of its rides across the seven European cities in which it operates would be made by electric cars by the end of 2025.

However, new data analysed by T&E show that less than 5% of distance driven on Uber rides is in electric cars. That means the company has barely four years to electrify another 45% of its total miles. Its promise allows it to offset cities in which it is falling short by achieving a 50% average through counting the cities in which it is above 50%. Yet even with such offsetting it looks unlikely to reach its self-imposed target.

The data shows Uber performing well in Lisbon, London and Amsterdam, but badly in Paris, Madrid, Berlin and Brussels where there are almost no electric cars on offer. Lisbon, London and Amsterdam require all company transport to be electric by 2025, while there are no such rules in the other four cities. T&E says it is the rules that will make the difference in decarbonising transport providers, not headline-grabbing promises.

T&E’s electric fleets programme manager Saul Lopez said: “This should serve as a lesson that corporate pledges are no substitute for governments at all levels taking measures to defend their citizens’ health and the climate. Uber and other ride-hailing agencies should be doing more, but so should governments. Clear targets for having zero-emissions fleets will give transport operators and charging providers the certainty they need to invest.”

The Uber data analysed by T&E showed 9% of ride distance in Lisbon is now done in e-vehicles, with 6% in London and Amsterdam, while the other four cities have 1% or less.