The EU can end its reliance on China for lithium-ion battery cells by 2027, Transport & Environment (T&E) has forecast. Europe is on track to produce enough Li-ion cells by then to fully meet domestic demand for electric vehicles and energy storage, according to the new analysis of battery-makers’ announcements. However, the green group said the EU needs a policy to counter US subsidies or risk losing investments in the EV supply chain. 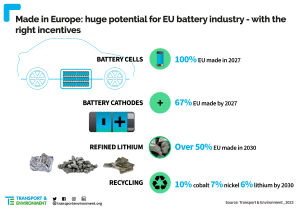 China’s dominance of battery components can also be cut. Two-thirds of Europe’s demand for cathodes – which contain critical raw materials – can be produced domestically by 2027, the report also finds. Existing and planned cathode production projects include Umicore in Poland, Northvolt in Sweden, and BASF in Germany. But companies could still move projects planned for Europe to the US, tempted by the tax benefits and other subsidies provided by the Inflation Reduction Act for localising battery supply chains in America.

Reliance on China for the refining and processing of battery metals could also fall dramatically: more than 50% of Europe’s refined lithium demand can come from European projects by 2030, T&E forecasts. These include RockTech Lithium and Vulcan Energy Resources in Germany, and Imerys in France. The materials will be sourced from mines abroad or directly from European projects  under a planned EU Critical Raw Materials Act provided they meet  high environmental standards.

Julia Poliscanova, senior director for vehicles and e-mobility at T&E, said: “The EU’s phase-out of combustion engines in 2035 has already spurred much investment. Today half of the lithium-ion battery cells used in the EU are already made there. But the Inflation Reduction Act has changed the rules of the game, and Europe needs to put more money on the table or risk losing planned battery factories and jobs to America.”

A European Sovereignty Fund to support green technologies should be established with cash raised through joint debt issuance, T&E said. This would provide a level European playing field and avoid cash-rich countries leaving others behind by offering generous state aid to companies. Only green production targeted by the US IRA, such as electric vehicles, batteries, and renewables, should receive cash.

But, unlike Next Generation EU, the funds should be disbursed directly by the EU to companies to avoid the slow absorption rates seen under the Recovery and Resilience Facility (RRF). Spending under the RRF also lacks strategic focus, funds are often slow to reach companies, and the money is not bankable in the same way as the US IRA production credits. EU state aid rules also need to be streamlined so that green projects can be scaled up using production aid – as is already permitted in the US.

Julia Poliscanova said: “Europe needs the financial firepower to support its green industries in the global race with America and China. A European Sovereignty Fund would support a truly European industrial strategy and not just countries with deep pockets. But spending rules need to be streamlined so that building a battery plant does not take the same amount of time as a coal plant.”

Analysis: A European Response to US Inflation Reduction Act