Previous snippets have shown how much a combination of low hanging fruit measures (light blue below), electrification (green line below) and advanced biofuels (dark blue line below) could contribute to reduce greenhouse gas (GHG) compared to a business-as-usual scenario (red line below) in 2050. To calculate this, T&E used its new European Union Transport Roadmap Model (EUTRM) tool. From the graph below, it is clear that these measures are not enough to achieve zero-GHG emissions from land freight in 2050, unless disruptive developments would happen in the sector, either in the technology or demand side. 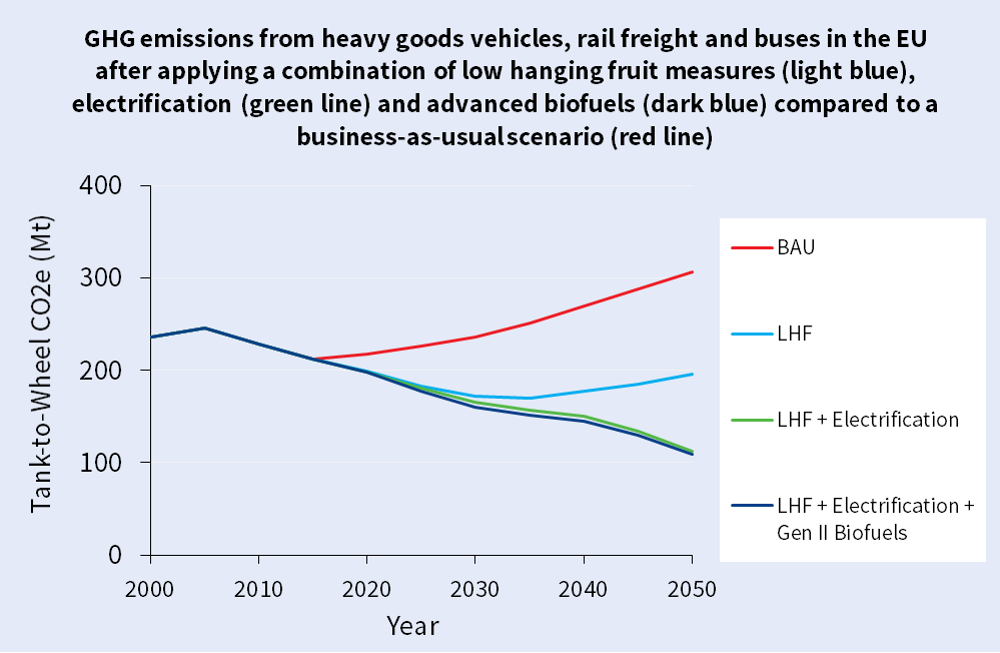 As full decarbonisation of the transport sector is needed, and once electrification is maximised due to efficiency reasons in comparison with other alternatives, other additional options were explored in our study. More specifically, we researched both power-to-liquid (PtL) and hydrogen. In both cases, we only looked at zero carbon options that are produced exclusively from renewable electricity. In that case, both PtL and hydrogen would have the potential to decarbonise the remaining energy gap of the sector, but using much more energy than if it could be fully electrified.

All pathways to zero GHG emissions use electricity to power the surface freight fleet, either directly through batteries and catenary wires, or indirectly through the production of PtL or hydrogen.  Therefore, it is important to quantify the additional renewable electricity demand, i.e. the primary energy supply (PES) requirement. This demand is also presented in the figure below.

In the EU, 0.1 x106 GWh (light blue column below) would be required to fuel trucks above 16t, following the assumptions included in the fifth snippet that looked into partial electrification of the sector. That is equivalent to approximately 3% of the total EU supply in 2015. On the other hand, 1.1 x106 GWh would be required to supply the remaining energy needs of all HDVs (including rail freight) in the form of PtL (green column below) after applying as much electrification as considered possible in the study. That is equivalent to 33% of the total EU supply of electricity in 2015 and 114% of total EU renewable supply. To provide that same amount of energy in the form of hydrogen, the required renewable electricity would be slightly lower. 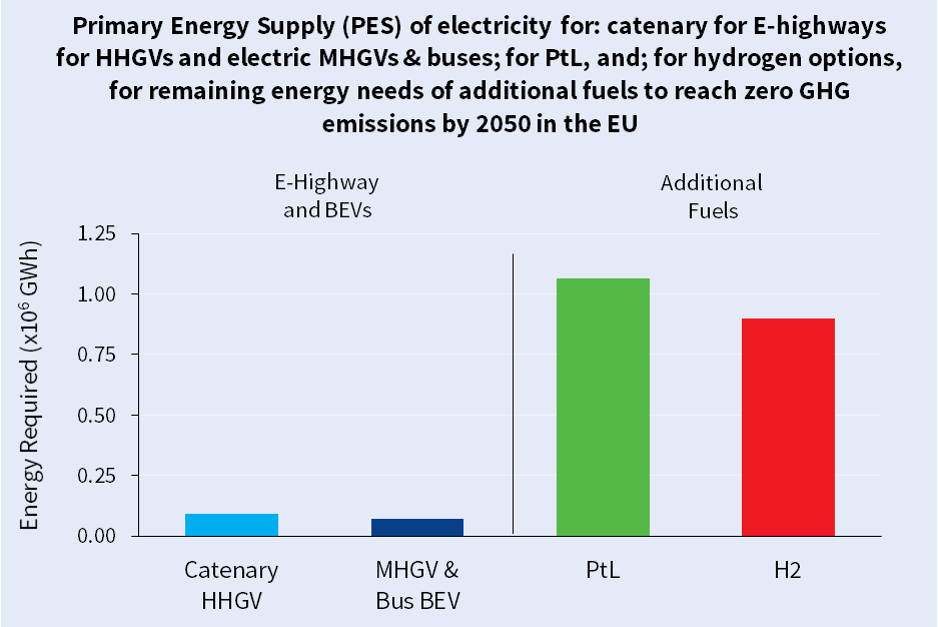 As both hydrogen and PtL require massive amounts of renewable electricity, other options would need to be considered, in combination with reconsidering the assumptions included in this study, such as reduced freight transport demand, higher modal share, or investment in innovation in order to ensure that large trucks can run on batteries when off the catenary lines. However, if the sector would benefit from disruptive innovation, for instance in the form of new technologies such as long haul fully electric trucks, that would become a game changer. Based on recent announcements, T&E will publish later in September its new analysis incorporating new possibilities on how to decarbonise land freight transport.