WHAT WILL THE EU HYDROGEN STRATEGY DO?

Production: The Commission will decide whether only renewables-based ‘green’ hydrogen will receive policy support – grants, incentives for investors, etc – or whether fossil fuel-based ‘blue’ hydrogen (with carbon capture and storage) will play a transitional role. 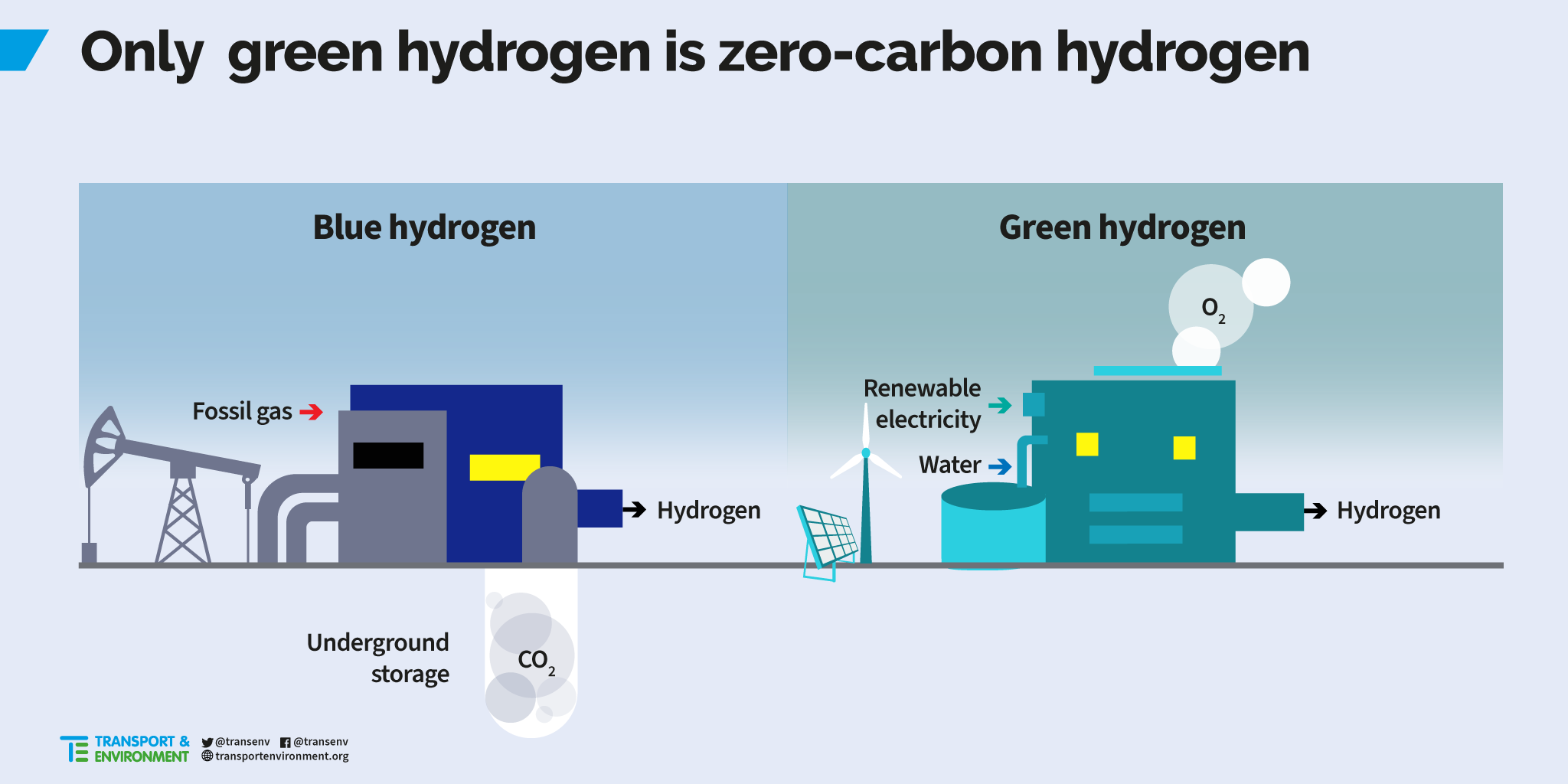 Demand: Past attempts to jumpstart a ‘hydrogen economy’ have failed, mainly because the demand for hydrogen never materialised. This is why the Commission will also need to give a clear steer on which end-use sectors will be required to use hydrogen. Industry and transport modes like aviation and long-distance shipping, where electrification is not an option, need to be prime candidates. In aviation, for example, powering flights in 2050 with electrofuels will require a huge rollout of wind and solar energy, boosting investment and further lowering costs (see graph). 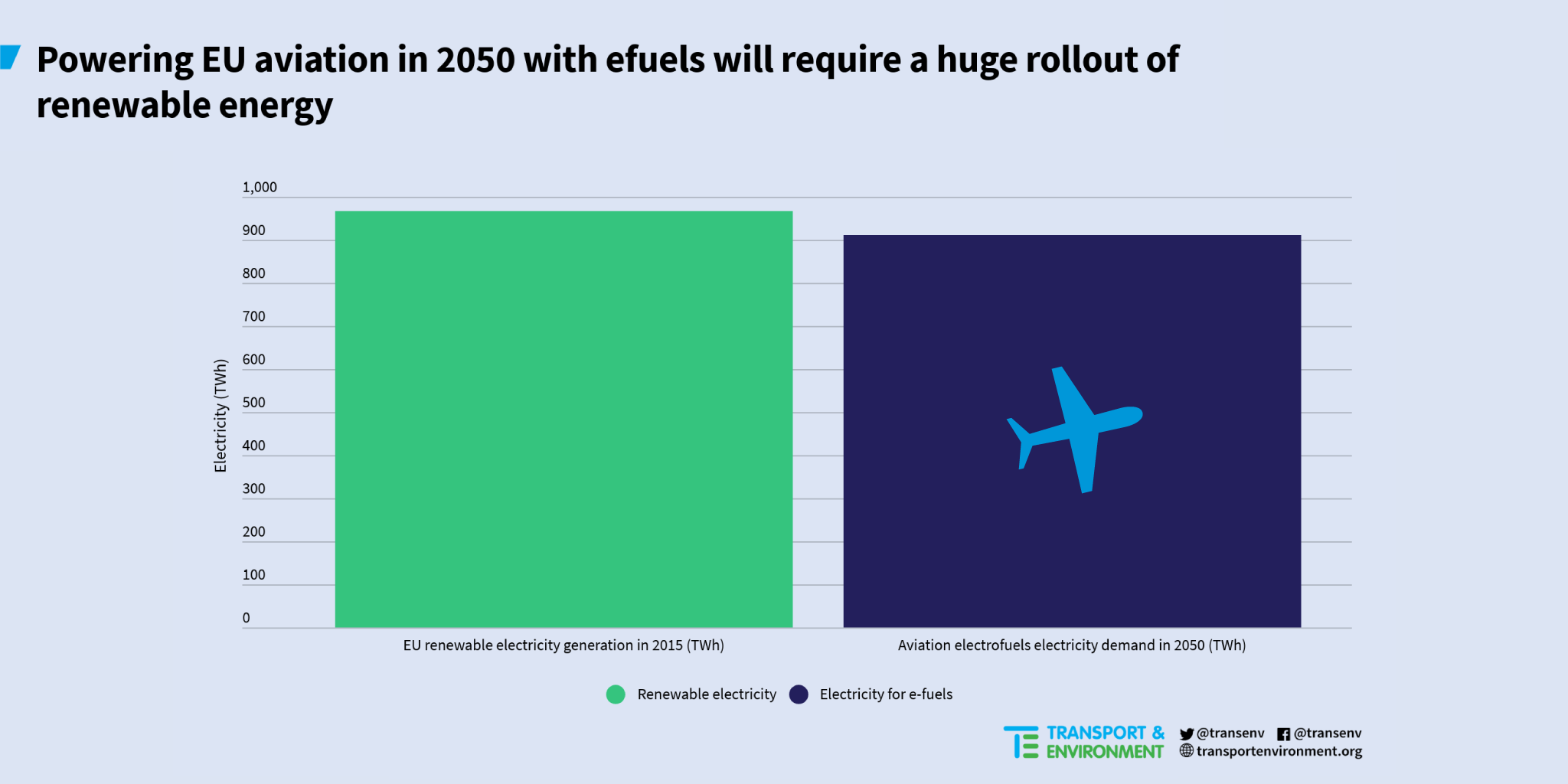 Supporting industry: The EU Hydrogen Strategy will offer financial support for those industries where hydrogen will be indispensable for decarbonisation (e.g. contracts for difference to compensate users for the higher price of using hydrogen, similar to the mechanism used in some countries to support wind and solar).

European: Producing renewable hydrogen domestically – in the EU – versus relying on imported hydrogen from locations outside the EU will be another key question for the Commission to address.

WHAT ROLE IS THERE FOR HYDROGEN IN TRANSPORT?

Not cars and vans: Hydrogen is one of the Zero Emissions Vehicles (ZEV) technologies, but the EU strategy must prioritise hydrogen for those transport sectors where direct use of electricity is not feasible. As battery electric cars and vans are a much more efficient use of energy (see infographic), hydrogen powered ones should not be the priority. 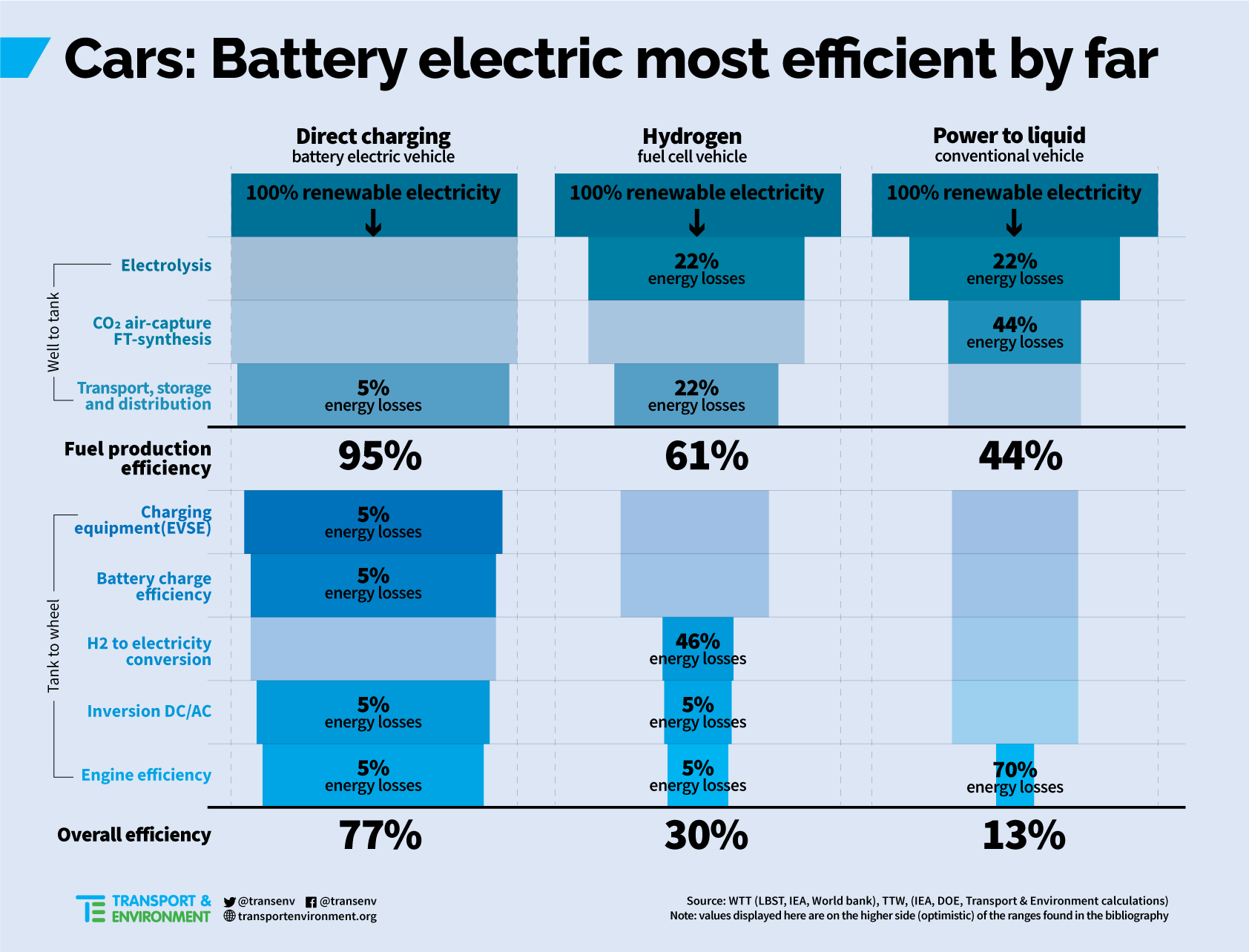 Clear role in aviation and shipping: Hydrogen – as a fuel or as a feedstock in the production of other electrofuels – offers decarbonisation pathways for aviation and long-distance shipping. The strategy must clearly state that they are high-priority end-use sectors.

And trucks? For trucks doing urban and regional deliveries, battery electric lorries are more efficient and cheaper to run. For the decarbonisation of long-haul heavy-duty trucks, the jury is still out on which zero-emission vehicles technology – battery electric (BEVs) or hydrogen fuel cell trucks (FCEVs) – will ultimately prevail. 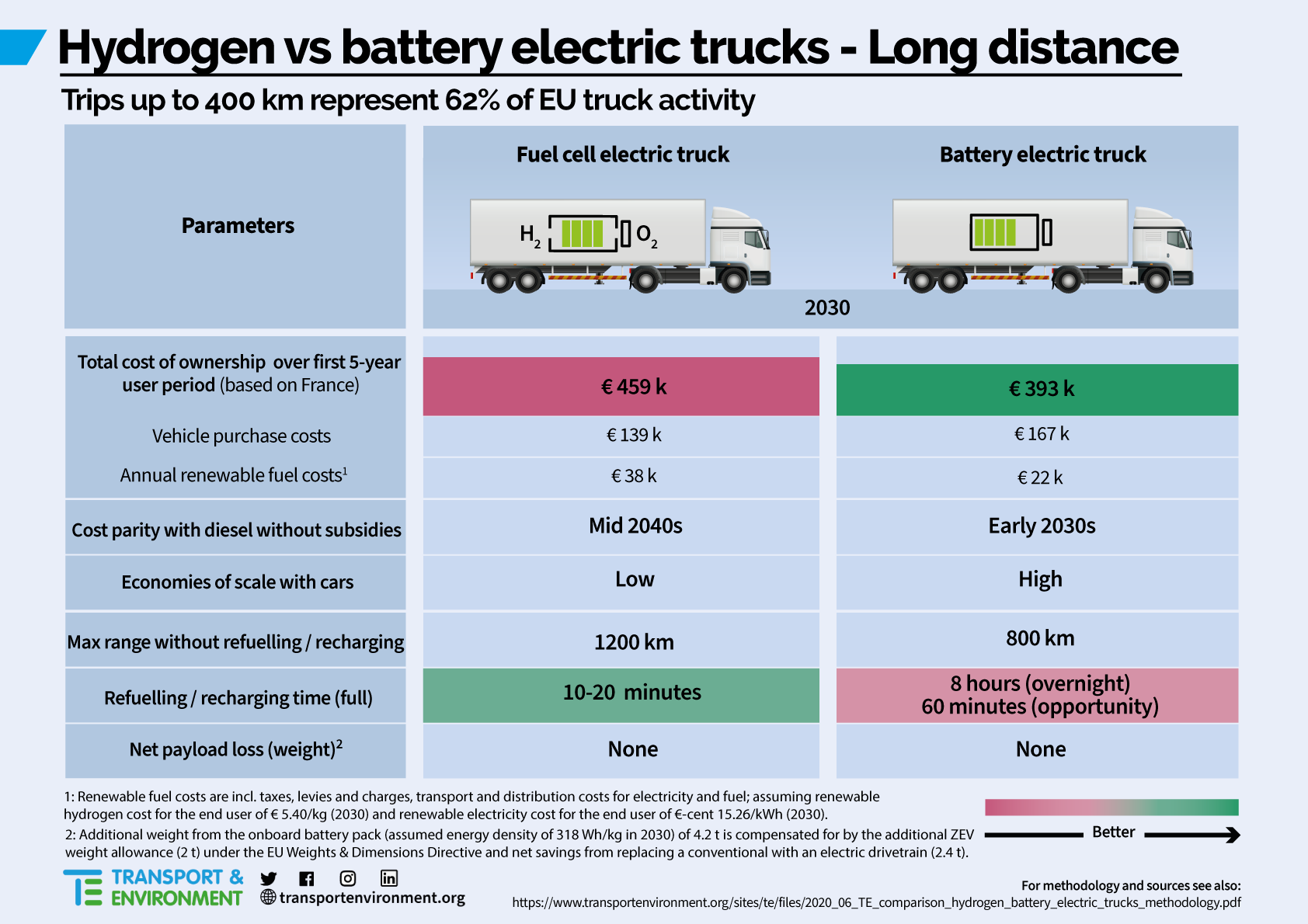 SHOULD THE EU ONLY PROMOTE ‘GREEN’ HYDROGEN?

The meaning of the term ‘clean’ remains open for interpretation (as in the case of the Clean Hydrogen Alliance) and could include the fossil gas-based production of ‘blue’ hydrogen by means of the steam methane reforming process combined with carbon capture and sequestration (CCS). But ‘blue’ hydrogen is fossil-fuel based and would be a distraction from the necessary move to renewable based hydrogen. 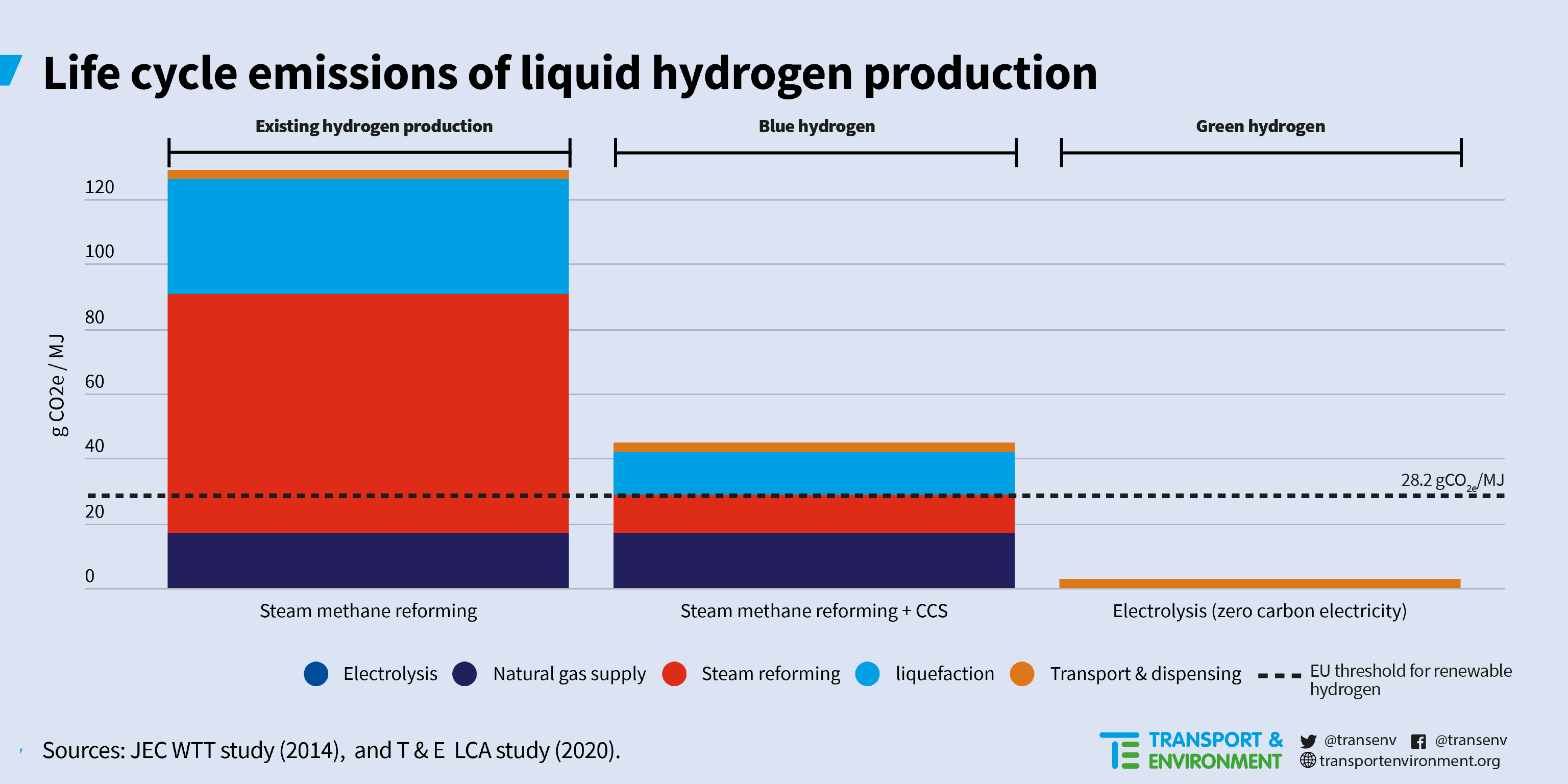 CONCLUSION and NEXT STEPS

The EU Hydrogen Strategy will outline the next steps on hydrogen for the European Commission:

Geert De Cock, electricity and energy manager at T&E, said: “The EU Hydrogen Strategy will make clear whether the European Commission means business. Will it start tackling the hard-to-decarbonise sectors like aviation and shipping that until now have escaped meaningful climate action? Will it resolutely choose an energy system based on energy efficiency and renewables or throw a lifeline to the fossil fuel industry by investing in fossil gas-based hydrogen?”