What’s the best way to cook a potato? Travelling around Europe you’ll find as many answers to this question as countries you visit. Indeed, this diversity in culture, language, and geography is one of Europe’s remarkable assets. “United in diversity”, as the EU says.

Tax, which is largely a national matter in the EU, is no different. The same person owning the same car will pay a different amount of tax in every European country. They could face a heavy tax bill in one country, get off tax-free across the border, and be subsidised in a third neighbour. As if taxes weren’t already complicated enough!

Despite the diversity across the continent, and despite the complication of accountancy, we know that taxes are important. They explain so much about the cars on our road from the expanding size to the boom in company cars.

And taxation, if designed correctly, can play a central role in reversing the trend in road transport emissions and set us on course to a zero-emission car fleet. Countries that have put in place ambitious tax reform are already well on their way in this transition, notably in Norway. In a new T&E report, The good tax guide: A comparison of car taxation in Europe, we explore the issue in detail, covering seven forms of car taxation across 31 European countries.

For many countries, and for many taxes, this incentivisation is missing:

Alternatively, some countries have taken innovative approaches to create tax incentives. Belgium and the UK, for example, have targeted tax benefits for company cars and keeping generous tax benefits for BEVs but not for polluting cars (incentives for private cars are lagging behind in both countries). France and Sweden have taken another approach, boosting the uptake of zero-emission cars through ‘bonus-malus systems’ that balance the budget flows from low-emission subsidies with high-emission taxes (thus redistributing taxes across households rather than raising them). Countries are experimenting with recipes to deliver a tax differentiation and more peer learning is called for. 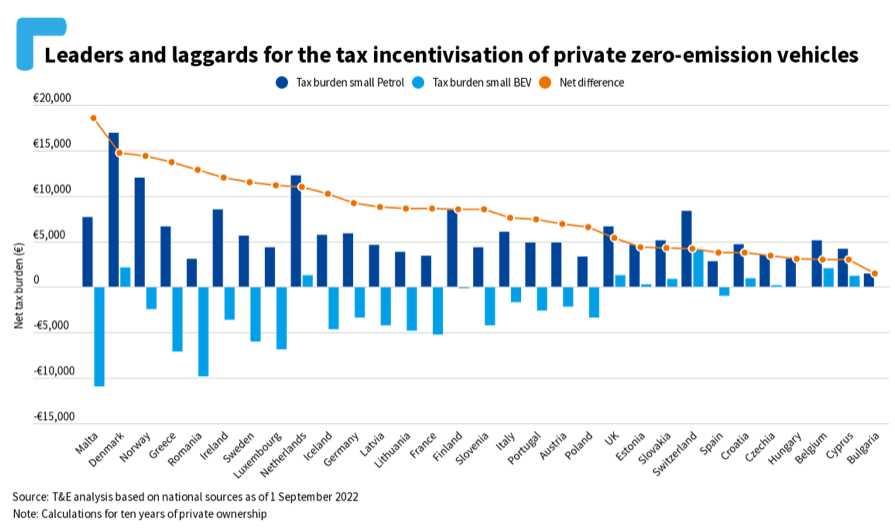 There are a lot of excuses for why the transition to a zero-emission fleet should be delayed. Governmental confusion about how to act can no longer be one of them. Our Good tax guide reveals that governments have the recipes, now it’s time to turn up the heat.