This report is the first time that systems of car taxation are directly compared across European countries. The comparisons cover 31 countries, seven forms of taxation, and two registration types (private and corporate). The results detail the different tax methods used and the resulting tax burden for typical car ownership and usage.

By calculating the different taxes that are levied on the same car in each country, a total tax burden can be compared across countries. The range in tax burden is substantial. For a small petrol car, the tax burden over ten years of private ownership ranges from €1,500 in Bulgaria to €17,000 in Denmark. For a compact petrol SUV, the range is from €2,800 to €51,400.

Importantly for the zero-emission transition, our report calculates the tax burden between vehicle types (small car and compact SUV) and powertrains (petrol, plug-in hybrid, battery electric vehicle – BEV) and the tax differential between them.

Our results reveal that the tax differential between a BEV and petrol private car varies greatly across countries. The highest tax differentials are in Malta, Denmark, and Norway while the lowest are in Bulgaria, Cyprus, and Belgium. The tax comparisons offer explanations for these findings:

The calculation of tax burden is also relevant for corporate cars, which constitute the majority (58%) of new registrations in Europe and add income and corporate tax benefits to the analysis. 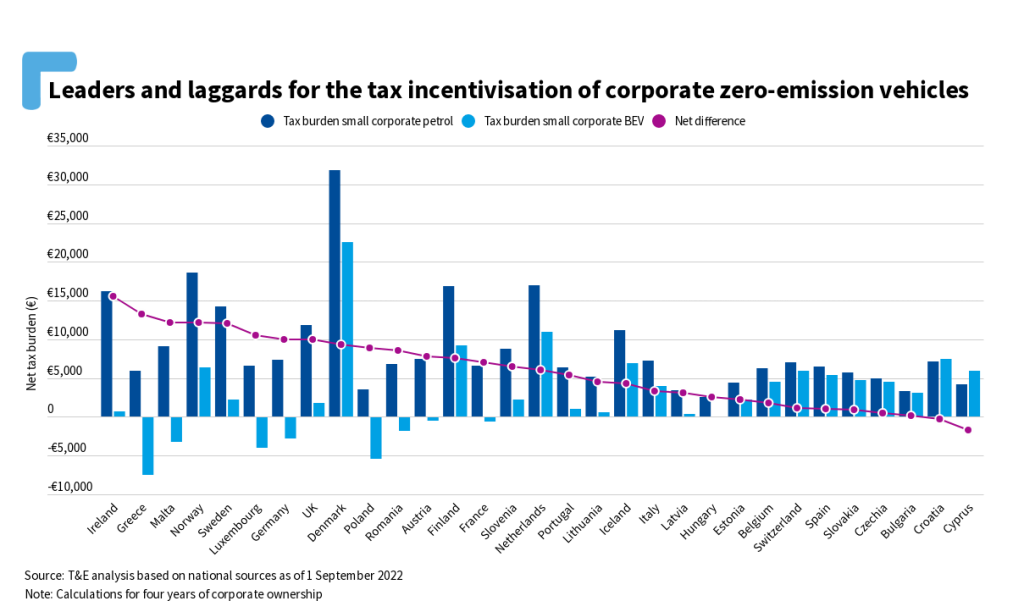 Given the emissions challenge faced in road transport, the learnings from these tax comparisons are critical and timely. Transport is the only sector in Europe where emissions continue to rise. This report offers good practices to employ, bad practices to avoid, and guidance to follow.