On 2 November the US EPA issued a second notice of violation implicating 10,000 US 3.0l diesel cars produced by VW, Audi and Porsche in having illegal levels of emissions. The involvement of Porsche is new and casts a shadow over VW’s CEO Matthias Müller, the former head of the sports car brand. VW contests this violation. The US EPA announcement was followed yesterday by an admission from VW that it overstated fuel economy and CO2 figures by 10-15% on 800,000 vehicles. The company has put aside a further €2 billion in compensation for drivers of the affected diesel and petrol models. In addition VW has confessed that the 1.4-liter ACT gasoline engine in the Polo that has cylinder-on-demand technology is also affected.

In a another announcement, the environmental group Deutsche Umwelthilfe (Environmental Action Germany, DUH) revealed it had tested an Opel Zafira 1.6 CDTi. It found emissions were 2-4 times higher than legal NOx values when tested in four-wheel drive but were below the legal limit of 80 mg/km when the car was tested in two-wheel mode in strict compliance with the official test. The results are highly suspicious, suggesting the possible presence of a “defeat device”, particularly since the after-treatment system shut down during the 4-wheel drive test. General Motors deny any wrongdoing.

The drip-drip of disclosure confirms T&E’s assertion that the recent Dieselgate scandal is the tip of an emerging iceberg in terms of a systematic manipulation of vehicle tests – and is most likely not limited to emissions tests. Diesel as well as petrol cars are involved; both CO2 and NOx tests have been manipulated; all carmakers are at it – seeking to gain an artificial competitive advantage. Our recent Don’t Breathe Here report identified that just one in 10 new diesels cars are meeting the Euro 6 limit on the road with the average car 4-5 times over the limit. It highlighted that the weak tests currently performed in the EU enable carmakers to fit cheap and ineffective exhaust after-treatment systems that pass flawed lab tests but produce much more pollution on the road. Inexplicably, the response of EU countries is not to tackle the problem but delay and double the already agreed emissions limits for diesel NOx – despite technology being available to meet these limits and despite the original 80 mg/km standard having been agreed back in 2007. Rejection of the new weaker rules by the European Parliament is now the last hope for a rapid reduction in diesel NOx emissions. 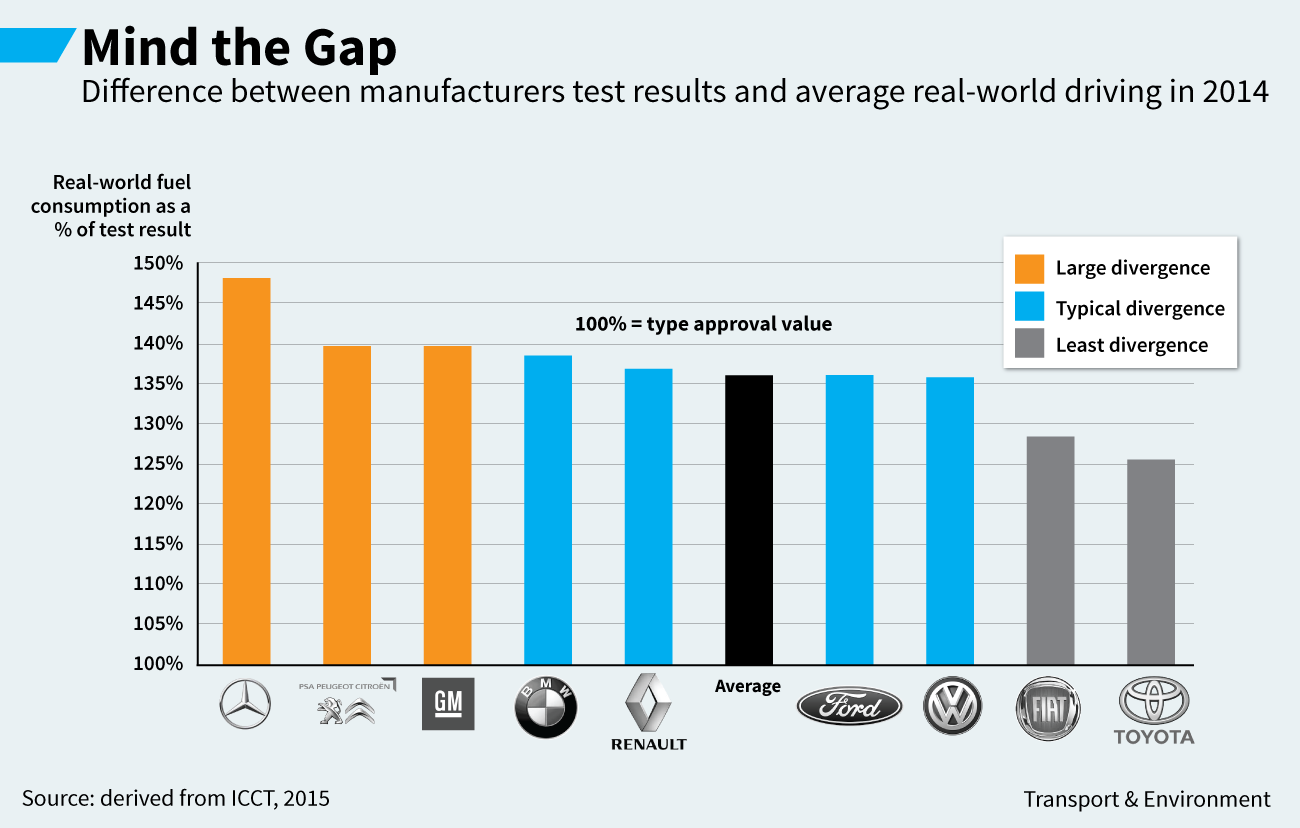 Our Mind the Gap report highlighted the gap between test and real-world CO2 figures has grown to 40% and some new cars, including the Mercedes A, C and E class, BMW 5 series and Peugeot 308, are now swallowing around 50% more fuel than their lab test results claim. Notably the average gap for VW vehicles is not high compared to other manufacturers. T&E has exposed the multiple ways carmakers distort the tests. Now VW has admitted to cheating; our data suggest it is unlikely to be the only one.

The problems in Europe arise because carmakers are allowed to test specially prepared “golden” vehicles in unrepresentative laboratory tests conducted by testing organisations that they pay. The tests are overseen by national type approval authorities, which compete for the business of “approving” cars for sale and are paid by the carmakers.

The solution is threefold. Firstly Europe must establish a politically independent ‘European Road Vehicle Inspection’ body. This should be responsible for checking the performance of vehicles on sale against those tested in laboratories and undertaking inspections – a similar role to that performed by the US EPA, which first exposed the Dieselgate scandal. Funding should come through a small levy on new vehicle sales, and the body should oversee the work of national authorities to ensure the level of scrutiny is consistently high.

It is significant that none of the drip-dip of disclosures were detected by the responsible national authorities, demonstrating that a European car market does not work without European-level oversight.

Secondly, the rules governing the type approval of vehicles must be tightened. The weak requirements that authorities “may” or “can” do certain procedures must be replaced by a “shall”, including an obligation to ensure the tested car is truly representative of the one being sold. The Type Approval Framework Directive is due to be revised shortly – it needs an overhaul.

Thirdly we need new, relevant tests and new limits that are enforced. The WLTP test for CO2 and RDE test for air pollution are progress but must be implemented from 2017. And the legal limits already set must be met – not diluted through the backdoor as is currently proposed for the 95g/km CO2 limit for 2021 and 80mg/km Euro 6 limit for diesel NOx. New 2025 targets are also needed for both pollutants to ensure progress is delivered on the road, not just in the laboratory.

The iceberg is emerging – the systemic abuse of vehicle tests can be brought to an end. The solutions are known – we will see whether the political will exists to stand up to the car industry and give citizens clean air to breathe and efficient cars to drive.