T&E’s ranking of the readiness of 10 major OEMs in Europe to transition to electric by 2030 [1], shows there are big differences in ambition and quality of their plans. Volkswagen and Volvo Cars have aggressive and credible strategies. Others like Ford have an ambitious phase-out target but lack a robust plan to get there. Stellantis, Daimler, BMW, Jaguar Land Rover, and Toyota rank the worst with low short-term battery electric (BEV) sales, no ambitious phase-out targets, no clear industrial strategy, and an over-reliance in the case of BMW, Daimler and Toyota on hybrids. 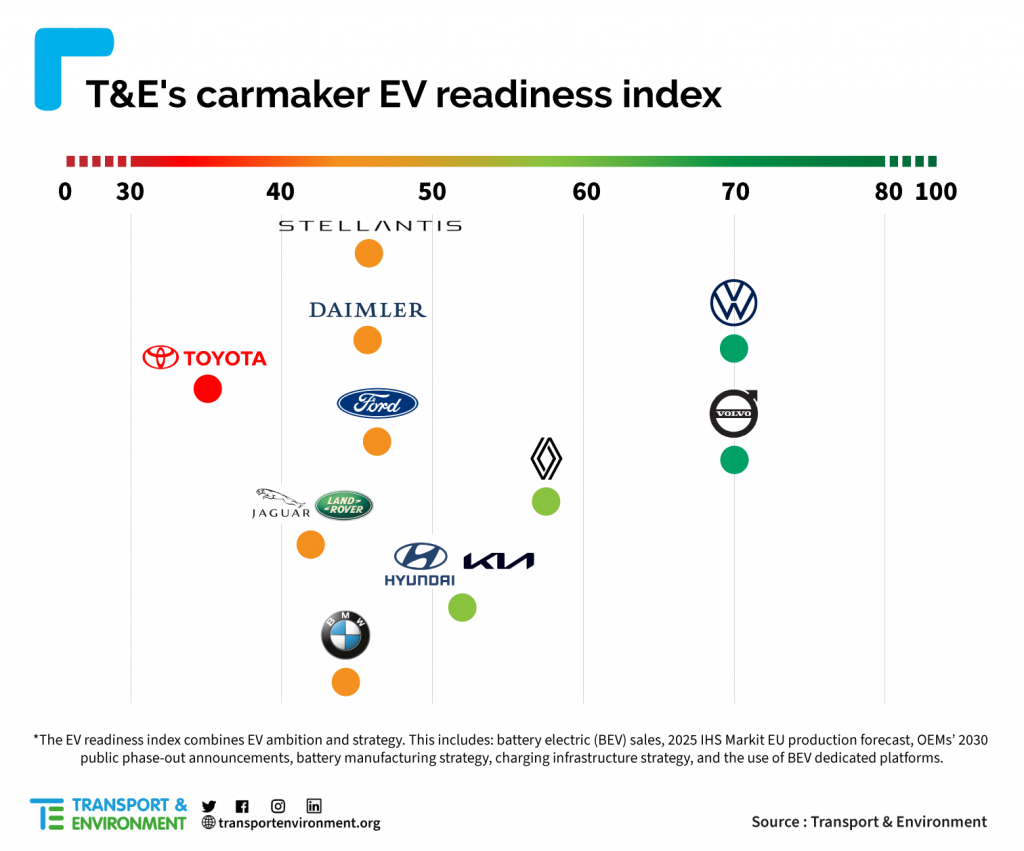 Julia Poliscanova, senior director for vehicles and emobility, said: “Carmakers are desperate to show off their green credentials, but the reality is most of them are miles away from where they need to be. Even those that are ambitious lack a suitable strategy to get there. Carmakers have failed to deliver on their promises before, who says this time will be different?”

The report raises concerns over the reliance on carmakers’ voluntary commitments, which are too low and not backed up by a coherent industrial strategy. Previous analysis by T&E showed that in 2016, carmakers failed on their collective target of selling 3.6% electric cars, achieving less than half of that.

But even if the current promises are met, Europe’s sales of battery electric vehicles (BEVs) are likely to be at least 10 percentage points lower than they need to be in 2030. To ensure carmakers ramp up the production of affordable electric cars in time to decarbonise by mid-century, European regulators need to set binding car CO2 targets in the next decade leading to two-thirds of new cars being fully electric by 2030 and all new cars in 2035, says T&E.

Julia Poliscanova concluded: “There is no longer any doubt that a fossil fuel free, all electric future is possible. But with only two carmakers close to where Europe needs to go, policymakers can’t leave it to carmakers to get there on their own. Targets need to be gradually tightened so that carmakers not only commit to phasing out fossil fuels, but develop a strategy that gets them there on time.”

Report: Commitments but no plans – How European policymakers can make or break the transition to zero emission cars