Uber’s EV commitment in Europe will save approximately 500,000 tonnes of climate-wrecking carbon dioxide emissions. This is equivalent to removing the CO2 emissions of 275,000 privately-owned cars from the roads.

“People across Europe are sick of pollution and congestion. Shared electric mobility is key to solving these problems. And the right place to start is with high-mileage drivers who’ll benefit first from cheaper-to-run, clean electric vehicles,” said William Todts, executive director of the European NGO Transport & Environment. 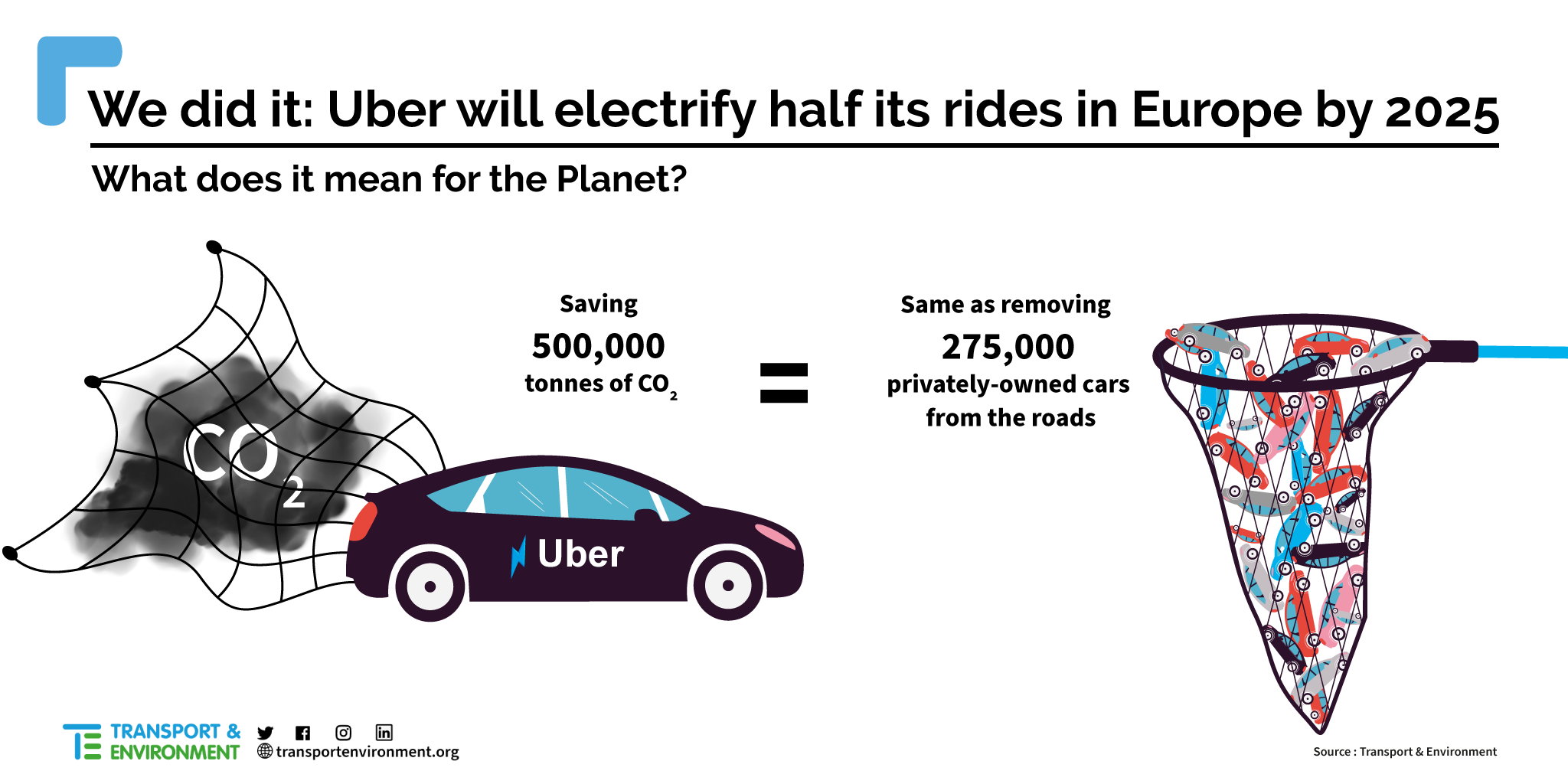 Uber also commits to go 100% electric within five years of having the economic and regulatory conditions to make driving all-electric cars as profitable as dirty combustion engine cars.

Electric cars are still expensive to buy today – set to reach price parity from 2022 – but they are cheaper to run. Professional drivers like taxis and Ubers can reap the early benefits of ultra-low fuel bills because they drive on average four-to-five times more than private motorists. With the support of governments and corporations like Uber, drivers can overcome the barrier of higher upfront costs in the few years left before EVs reach price parity with diesel and petrol cars. A raft of affordable electric models that are coming to market in the next two years will make the battery electric car the cheapest yet for professional ride hailing.

“The EU Commission has a key role to play here. Tighter vehicle CO2 standards will help increase the offer of attractive and affordable electric cars, making it easy for Europeans to go emissions-free. If we want clean air, a healthy planet and lower fuel bills, this is exactly what we need to do,” said William Todts.

In November, a broad coalition of green NGOs in the US, Germany, France, the UK, the Netherlands, Spain, Portugal and Belgium launched the #TrueCostOfUber campaign asking Uber to get rid of polluting vehicles and electrify its fleet. The coalition includes the Sierra Club, Nabu, Respire, Bond Beter Leefmilieu, Les Chercheurs d’Air, SumOfUs, Ecodes, Zero and Transport & Environment.

Following today’s announcement, T&E and its partners will closely monitor Uber’s decarbonisation efforts to make sure it delivers on its promises.

Transport is Europe’s biggest climate problem, representing more than a quarter (27%) of the bloc’s total greenhouse gas emissions. Cars in the EU27 emit 45% of all transport carbon emissions. To meet the EU’s legally binding target of net-zero emissions by 2050, the bloc will need at least 40% of new cars to be emissions-free in 2030, and will need to sell the last combustion engine car by 2035 at the very latest.