Medium-sized [1] battery electric cars (EV) are on average 14% cheaper to run than equivalent diesels today, if slow charging overnight near home and/or fast charging at preferential rates are available. The savings can be higher (24%) in the case of Parisian drivers. In monetary terms, these savings amount to €3,000 every year. This is because of cheaper electricity, lower EV retail prices and higher purchase incentives in France.

The taxi and ride-hailing markets are best positioned to go fully electric first. The economics of EVs – more expensive to buy but a lot cheaper to run – match perfectly with high-mileage, low-margin businesses like ride-hailing and taxis. Uber-type drivers can do up to five times more kilometers than an average motorist [2].

Yoann Le Petit, new mobility expert with T&E, said: “This is a win-win-win situation for drivers, citizens and the planet. The sooner Uber and taxis go 100% electric, the sooner citizens will enjoy cleaner air and quieter neighbourhoods, the planet will have less climate-wrecking emissions and drivers will earn more money. If Uber wants to lead the change and be part of the solution for our cities, then the company should commit to 100% electric rides by 2025 in key European capitals.”

As cities and countries announce bans on diesel and petrol cars to fight air pollution and climate change, the appeal of driving emissions-free vehicles such as electric cars increases.

In London, the Mayor’s EV infrastructure taskforce estimates that 70% of the demand for slow and normal chargers in residential areas will come from Uber drivers alone [3].

Charging is a key barrier for the uptake of EVs by professional drivers. Because slow charging is cheaper and publicly accessible but takes several hours, slow charging stations in residential areas where drivers live is key to significantly reducing operating costs. In parallel, dedicated fast chargers are needed for EV drivers to top up during the day, while having a break or waiting for customers.

T&E’s lifecycle CO2 emission calculator [4] estimates that today EVs cut CO2 emissions by two-thirds on average across Europe compared to diesel cars. Because of Uber drivers’ high mileage, the climate benefits of replacing a combustion car with an EV in this sector are even greater.

Thanks to the EU’s CO2 targets, the European EV market will reach a 10% market share in 2021. By then more than 200 different EV models will be available in the showrooms. These models will be even more affordable thanks to the recent recovery measures announced by the German and French governments, which include new EV purchase incentives.

Yoann Le Petit said: “In the fight against climate change and air pollution, city dwellers need to be able to commute less, cycle more and hop on the bus or metro more often. But to realise the goal of cleaner cities, authorities will also need to clean up the car fleet too. It makes perfect economic and climate sense to fully electrify high-mileage vehicles like Ubers and taxis. Cities have a crucial role in the ecological transition, providing the right incentives so drivers switch to EVs, and building up the charging network so they can operate easily.”

Today, the #TrueCostOfUber campaign launches in Madrid and Lisbon. The campaign calls on Uber to go 100% clean in large European cities by 2025. It kicked off last November in the US, France, Germany, Belgium, The Netherlands and the UK.

The number of drivers for apps such as Uber, Bolt and Kapten has mushroomed in recent years. In Paris, the fleet of ride-hailing drivers tripled in the past four year, from around 10,000 in 2016 to about 30,000 today. Current mayor Anne Hidalgo has committed to require the ride-hailing sector to go zero-emission should she be re-elected on 28 June. In Portugal, the number of drivers also tripled in 2019 to reach almost 20,000 professional drivers. In London, the largest market for ride-hailing services in Europe, there were 88,000 active Uber-type drivers in 2018.

Air pollution is the biggest environmental health risk in Europe, according to the European Environment Agency. People living in polluted cities are more at risk from Covid-19, the European Public Health Alliance has warned.

Transport is Europe’s biggest climate problem. Cars in the EU27 emit 45% of all transport carbon emissions. To meet the EU’s legally binding target of net-zero emissions by 2050, the bloc will need at least 40% of new cars to be emissions-free in 2030, and will need to sell the last combustion engine car by 2035 at the very latest. 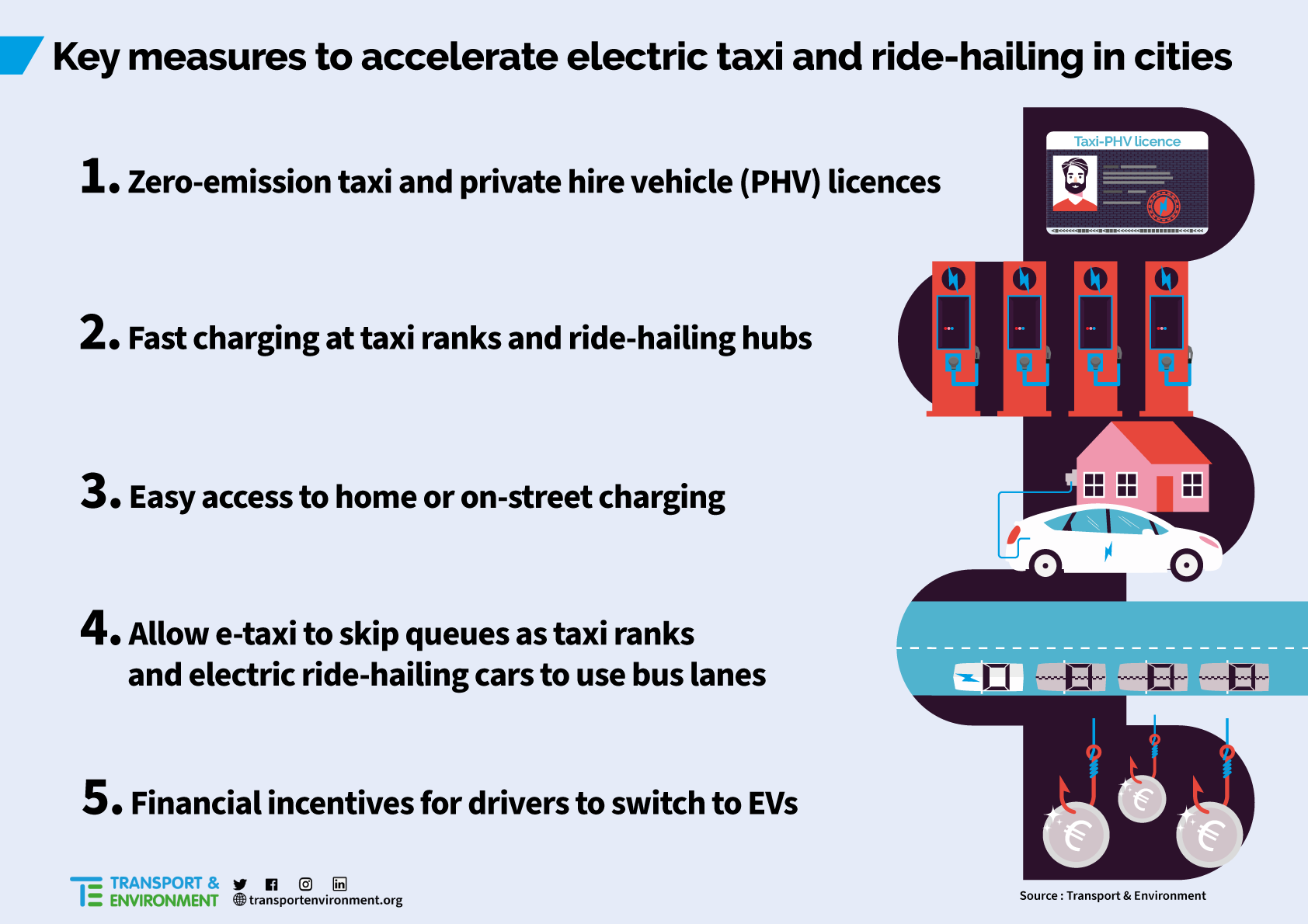 Notes to the editor:

[4] The lifecycle analysis estimates the CO2 emissions associated with the fuel production,  vehicle manufacturing and the use of the fuel in the vehicle.