Skip to content
Data compiled by Euromonitor for European research and campaign group Transport & Environment (T&E) shows a surge in the number of Uber drivers (officially registered as private hire vehicles – PHV) in the past few years. In France, which liberalised the taxi market in 2015, the number of reported PHV drivers doubled in three years (from more than 15,000 in 2016 to 30,000 in 2019) [1]. The number of Uber drivers in London almost doubled in three years (from 25,000 in 2016 to 45,000 in 2018), accounting for roughly half the total PHV licence number.

This has made Uber one of the biggest taxi services in Europe, with 3.6 million users in London in 2019 and with 2.7 million users in France in 2017. According to company documents issued for its stock market launch, Uber is looking to massively increase its operations worldwide and is eyeing Europe in particular, identifying Germany, Spain and Italy as priority markets for expansion.

But whilst the number of taxi licenses was historically capped through licenses [2], Uber has seen rapid growth [3]. Since Uber’s arrival in London, its biggest European market, taxi and PHV trips have increased by roughly 25% in the capital. This data strongly correlates with a 23% increase in overall CO2 emissions for the taxi and PHV sector in the UK in the same period.

Taxi and Uber licenses in the UK 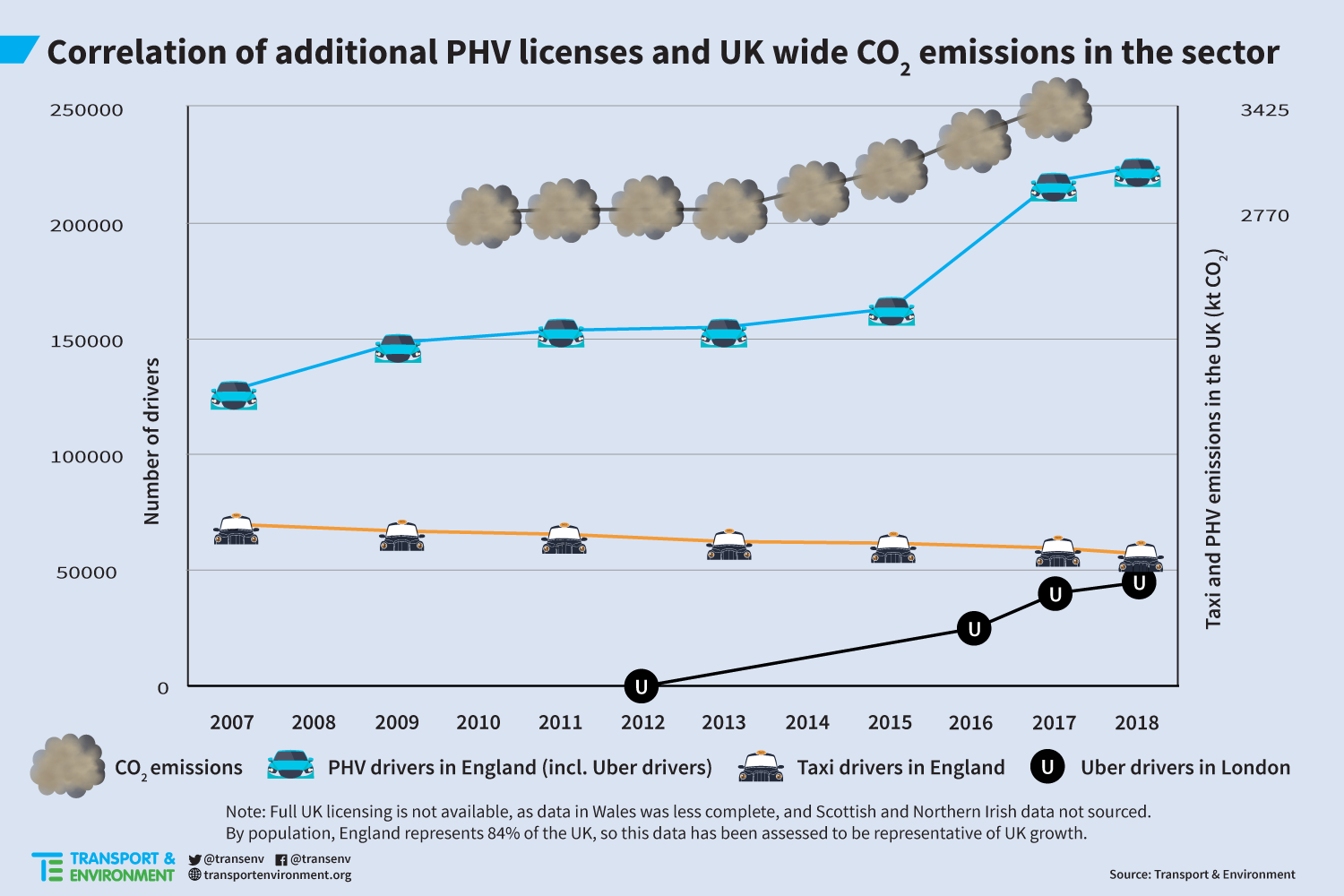 The analysis estimates that in London and Paris alone, the emissions of Uber taxi services could be as high as half a megatonne of CO2 – 515 kilotonnes of CO2. This is equivalent to adding the CO2 emissions of an extra 250,000 privately owned cars to the road.

These kilometers have predominantly been driven by petrol and diesel cars, exacerbating the air pollution crisis in European cities. Worryingly, French government data from 2017 show that 90% of the registered private hire vehicles, which includes Uber, were diesel cars. The high share of diesels in the PHV fleet can be also found in the traditional taxi market. It’s thought that other European cities where Uber operates have similar levels of diesels in their fleet.

Yoann Le Petit, new mobility expert with T&E, said: “Uber’s CEO tells us they ‘do the right thing, period.’ But the reality is that Uber is part of the traffic and pollution problem, adding car trips in our cities and adding to the climate and pollution crisis. If it wants to become part of the solution Uber needs to stop using petrol and diesel cars and rapidly shift to 100% electric rides. That’s the right thing to do, full stop.”

The findings confirm that cities in Europe face the same challenges as American ones, such as New York, Boston, Chicago, and San Francisco, where Uber and Lyft have been shown to exacerbate pollution and congestion.

A broad coalition of green NGOs in the US, Germany, France, the UK, The Netherlands and Belgium today launched the #TrueCostOfUber campaign. This collective action aims to tell concerned citizens and city authorities that Uber needs to clean up its act in order to operate in cities across Europe and the US. The company therefore needs to help their drivers switch to zero-emission cars as it is already doing in London thanks to the ultra-low emission zone in the capital.

The coalition includes organisations such as the Sierra Club, Nabu, Respire, MilieuDefensie, Bond Beter Leefmilieu, Les Chercheurs d’Air and Transport & Environment. These organisations will take the campaign to the cities of Paris, Brussels, Berlin, Amsterdam, Antwerp, Manchester, amongst others, urging local authorities to clean up Uber.

Rebekah Whilden, campaign representative with the Sierra Club (USA), said: “Uber and Lyft aren’t fooling anyone anymore with their greenwashing. Cities and countries around the world are beginning to see the companies for what they are: Corporate players putting profit over planet. You can’t claim sustainability if the data proves you’re doing the opposite– reducing transit ridership, worsening our air quality, and mistreating the people at the heart of your business model.”

Pierre Dornier, president of the citizens movement Les chercheurs d’air (Brussels), said: “Brussels, the capital of Europe, seriously suffers from air pollution and congestion. It cannot afford companies like Uber adding to the diesel and gasoline cars on its streets. Uber must be part of the solution, not the problem.”

Justyna Wladarz, transport policy expert at NABU (Germany), said: “Uber is a wolf in sheep’s clothing – it says it wants sustainable mobility, but what it really does is adding as many cars as possible to our already highly congested and polluted cities.”

Olivier Blond, president of Respire (France), said: “Diesel kills. Uber should not be a part of the air pollution problem. The company should stop using these dirty cars, and especially in densely populated urban areas like Paris, they are very inefficient. Solutions exist for citizens and for drivers“.

Greg Archer, director of Transport & Environment UK, said: “Forced by London’s clean air rules, Uber has already committed to 100% clean rides in London by 2025. This proves that it is a financially viable option for the company. If it wasn’t, they would have pulled out of the market already. So our question to Uber is: why not Bristol, Birmingham, Manchester and Leeds? Are those second-class citizens? Are their lungs any different?”

Laurien Spruyt,climate & mobility policy officer at Bond Beter Leefmilieu (Belgium), said: “Many Flemish cities have been working towards electrifying taxis for years now. They are also introducing measures to reduce car traffic in order to improve air quality. The upcoming liberalisation of the taxi market in January threatens to wipe out these efforts. We urge Uber, if they choose to come to Flanders, to make the right decision right from the start and to only use electric cars.”

Diesel engines are the main source of nitrogen dioxide emissions (NO2). According to the European Environment Agency, exposure to NO2 caused the premature deaths of an estimated 79,000 people across 41 European countries in 2015.

Transport is Europe’s biggest climate problem, representing more than a quarter (27%) of the bloc’s total greenhouse gas emissions. Cars emit 44% of transport emissions and are still rising. If the EU is to achieve the Paris Agreement goals of limiting global temperature rise to 1.5ºC, car emissions must be zero by 2050 at the latest, meaning the last diesel or petrol car should be sold ideally by 2030, and by 2035 at the latest.