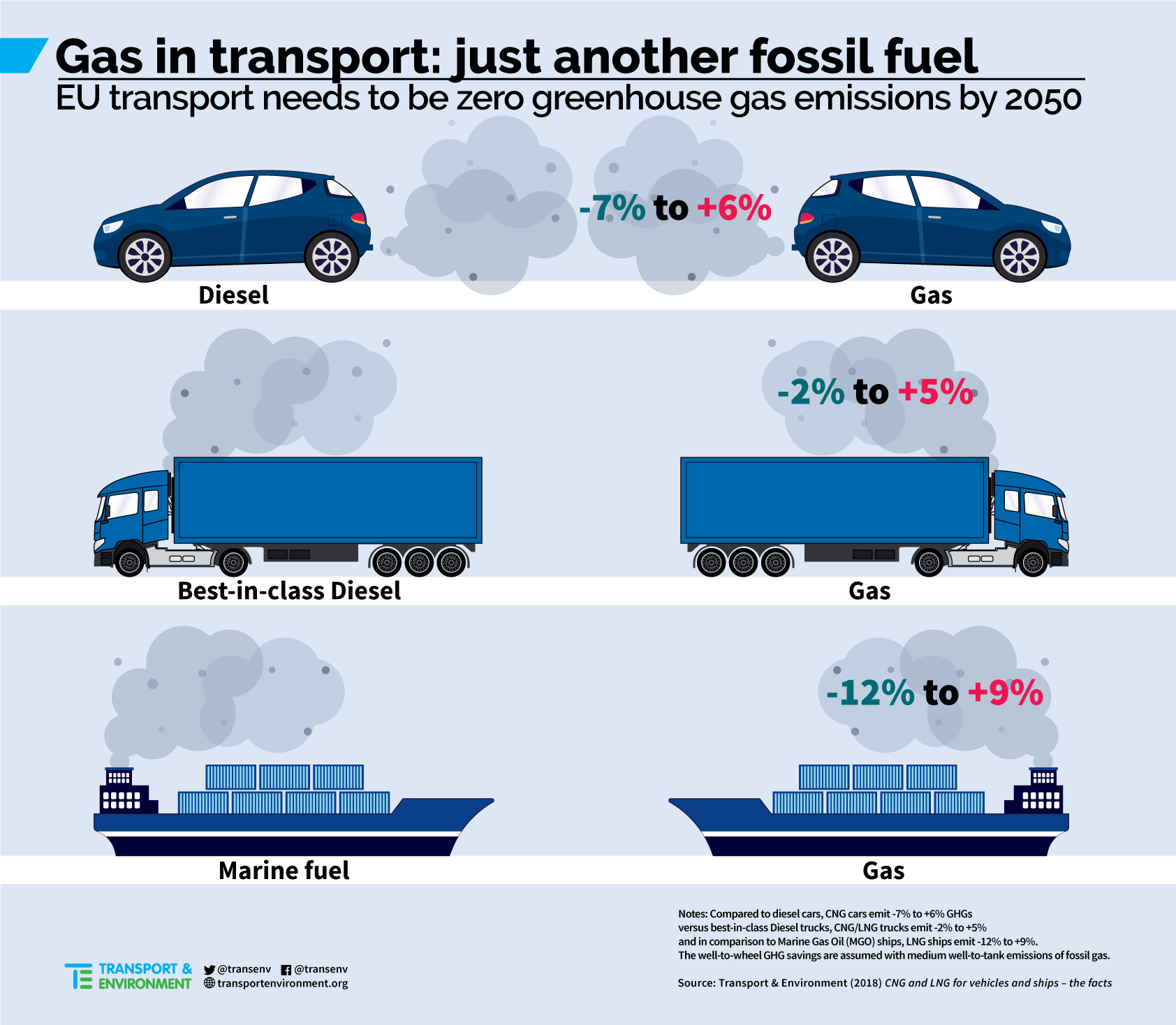 Burning gas in cars also emits as much air pollution as petrol and the limited advantage over compliant diesel cars could be eliminated by planned new standards, the research shows. NGO Transport & Environment (T&E), which published the report, said lawmakers must accept that fossil gas cannot help clean up transport and should start taxing it at the same rate as diesel and petrol.

When taking into account the effects of leakage of methane – a very potent greenhouse gas – fossil gas could increase GHG emissions by up to 9% or decrease them by a maximum of 12% across all transport modes. In cars, the GHG impact of compressed natural gas (CNG) ranges is similar to diesel, while in trucks it mirrors closely that of best-in-class diesel lorries. In shipping, the impact of liquified natural gas (LNG) is close to that of marine gas oil, but these figures are highly dependent on engine methane slip and upstream leakage.[1]

In the EU, on average, gas is taxed at rates 76% lower than diesel. [2] In countries with high sales of CNG and LNG vehicles, fossil gas enjoys even lower tax rates. Italy consumes 60% of the methane used in European transport and accounts for 68% of CNG car sales. [3] If LNG would be taxed at similar levels to diesel, there would be no business case for LNG trucks.

Jori Sihvonen, clean fuels officer at T&E, said: “Gas cars, trucks and ships have no benefits for the climate and they’re a distraction from our real objective, zero-emission transport. Governments should resist the gas lobby’s offensive and stop wasting precious public money on gas infrastructure and tax breaks for fossil gas.”

Cars running on gas – including renewable gas – belch out as much air pollution as petrol cars and marginally less than diesels that comply with new real-world limits, the report finds. In trucks, LNG can increase NOx, depending on the engine type, and can have significantly higher particulate number emissions than diesel. For ships, LNG has a clear benefit compared to heavy fuel oil although NOx after-treatment systems and further desulphurisation of existing marine fuels can achieve similar results. [4] T&E said the car, truck and shipping industries should use the shift to low-carbon technology to also move to low air pollution technology.

Governments pinning their hopes for decarbonisation on biomethane from waste must recognise that it could only supply, at maximum, 9.5% of transport’s needs. This would also mean no biomethane would be left to decarbonise the other sectors already using gas – residential, heating and power – where the infrastructure already exists. Renewable gas based on electricity (power-to-gas) is very energy intensive and costly to produce, the report finds.

Jori Sihvonen concluded: “The idea that we can decarbonise transport with renewable gas is a pipedream. What little biomethane and electro-methane we’ll have will be needed to decarbonise the heating and power sectors, which currently rely on fossil gas. Pushing biomethane in transport actually makes the climate battle harder by depriving industry and domestic heating of this limited renewable resource.”

[1] Methane has 28 times the global warming potential of CO2, and when an engine burns LNG unburned methane also escapes through the exhaust. Methane is also released ‘upstream’ during the production and transportation of fossil gas. A recent US study found methane leakage rates are 60% higher than previously estimated.

[3] In Italy, the price of fossil gas at the pump is about half the price of diesel due to a CNG tax rate of 0.5% of the diesel tax rate.

[4] The sulphur standard for road petrol and diesel is 100 times better than the marine standard in sulphur emission control areas (SECAs). Therefor marine fuels can be further desulphurised to deliver high air pollution benefits without the need for replacing the ships and associated bunkering infrastructure to run on LNG.