In November 1998, T&E published a study, Cycle Beating and the EU test cycle for cars, by the Swedish transport economist Per Kågeson, who had been T&E’s president from 1993 to 1997. Kågeson used results from tests by the Swedish exhaust emission monitor Rototest AB, and concluded: ‘The tests performed by Rototest reveal that car manufacturers are involved in a considerable amount of cycle-beating. The result is very high emissions of hydrocarbons, carbon monoxide and ammonia from high engine loads.’

The concept of ‘cycle beating’ (manipulating test results) had by then been recognised by the European Commission for lorries, but not for cars. In an introduction to Kågeson’s report, T&E’s communications manager Frazer Goodwin wrote: ‘Those reading this paper who do not have a technical background may find the content rather technical. The basic message is, however, rather simple. The test new cars take on the amount they pollute is unrealistic of real driving and too predictable. This allows car manufacturers to design their cars to pass tests, and results in cars producing higher levels of pollution when driven on the road.’

T&E’s director at the time was Gijs Kuneman. He remembers: ‘One of the worst cars for emissions that were much higher than the published data was the Ford Mondeo, which had just been voted Europe’s car of the year. So I chose as the headline for our press release: “’The worst car – the car of the year”. This led to Ford threatening to take legal action against us, which would have been great publicity, but it never happened.’

The discrepancy between test cycle and real-world emissions continued to be something T&E highlighted, but only in December 2012 did it become a specific campaign to highlight the growing gap. And then it focused largely on fuel consumption – and thus CO2 emissions – rather than pollutants.

In 2006, T&E published How clean is your car brand? which for the first time itemised emissions data carmaker by carmaker. It became an annual report on Europe’s car emissions, and the December 2012 edition cited ‘worrying emerging evidence that carmakers are cutting their official CO2 emissions and fuel consumption figures not just by improving their cars, but also by “optimising” the way they test them.’ It concluded that, as a result, ‘the gap between official and “real-world” vehicle fuel consumption is growing.’

Three months later, T&E published the figures. For the Mind the Gap report, published in in March 2013, T&E tested six cars and found the gap between official CO2 and fuel economy figures and real-world results to be 19-28%. The report highlighted 20 ways carmakers ‘creatively reinterpret’ test procedures, including taping over cracks around doors and grilles, overinflating the tyres, adjusting the wheel alignment and brakes, using special super-lubricants, minimising the weight of the vehicle, and testing in freak conditions such as at altitude, at unrealistically high temperatures and on super-slick test tracks. 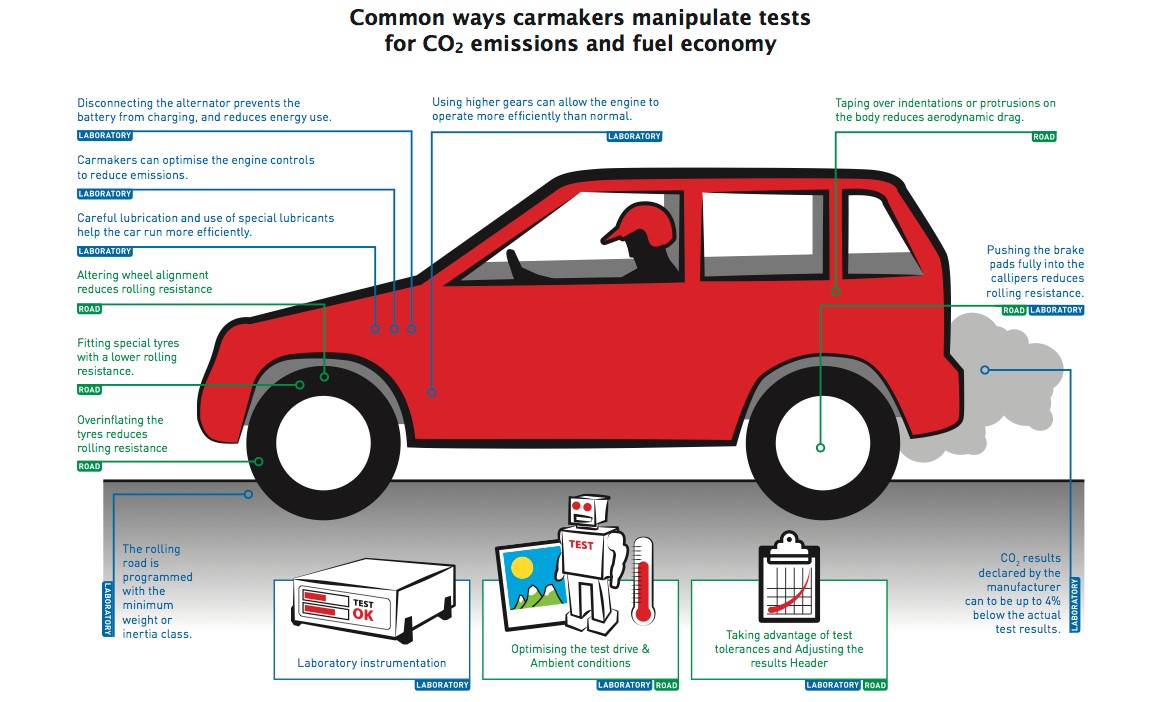 Ironically, that same month Volkswagen announced that it expected to meet the 2020 CO2 emissions target for new cars of 95 g/km, and it stressed that it was not relying on any loopholes to achieve its target. Its chief executive Martin Winterkorn said: ‘Now is the time to initiate innovations so that efficient technologies and alternative powertrains can be widely used faster. I am convinced this is in the best interests of customers, the environment and Europe as an industrial location.’

Winterkorn’s position was somewhat undermined when, in the same statement, he went on to advocate ‘supercredits’ for high-consumption cars, which are effectively loopholes to allow a manufacturer to meet its emissions target.

Since then T&E’s Mind the Gap series of reports have highlighted the growing gap between official test results and the real-world CO2 emissions and fuel economy of vehicles in Europe.

Link to T&E’s 1998 study Cycle Beating and the EU test cycle for cars: