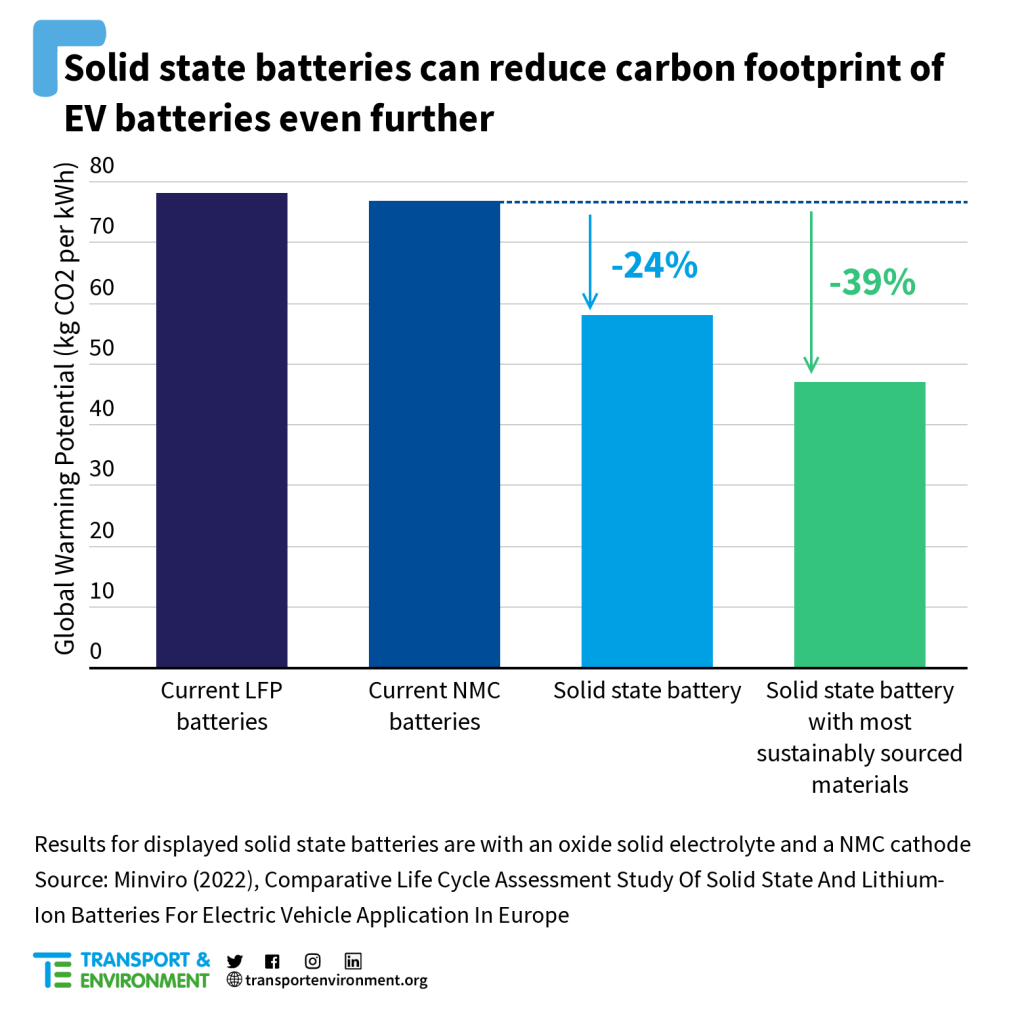 A solid state battery, which stores more energy with less materials, can reduce the already decreasing carbon footprint of an electric car battery by a further 24%, the study finds. The analysis compares a NMC-811 solid state battery, which is one of the most promising chemistries being developed, to current lithium-ion technology. Solid state technology uses solid ceramic material instead of liquid electrolytes to carry electric current, also making the batteries lighter, faster to charge and eventually cheaper. Battery manufacturers forecast that solid state batteries will be used in EVs in the second half of the decade.

Cecilia Mattea, clean vehicles officer at T&E, said: “Electric vehicles are already far better for the planet than burning oil and the carbon footprint of batteries is falling every year. But solid state technology is a step change because their higher energy density means far less materials, and therefore far less emissions, are needed to make them.”

The research also finds the new technology can reduce the climate impact of batteries even further – by 39% compared to current lithium batteries – if solid state batteries are made using the most sustainably sourced materials. New mining methods, including extracting lithium from geothermal wells, have significantly lower climate impacts than more commonly used sources such as lithium from hard rock mined in Australia and refined in China.

Solid state batteries could require up to 35% more lithium than the current lithium ion technology, but far less graphite and cobalt are used. T&E said that requirements in the EU’s proposed Batteries Regulation for lithium to be sourced responsibly – in terms of environmental and social impacts – and recycled are a ‘no regrets’ policy that will ensure there is enough supply for solid state batteries.

Cecilia Mattea said: “Cleaning up the way we extract and process the raw materials in solid state batteries will slash their climate impact even further. Improving the methods used in the supply chain will be key. The EU Battery Regulation is an opportunity to ensure that every battery made or sold in Europe is better sourced, has a lower carbon footprint and is recycled at the end of its life.”

MEPs and EU governments are currently negotiating the final text of the new Battery Regulation. T&E calls on lawmakers to both ensure the legislation incentivises the production of batteries with a lower carbon footprint, and increases lithium recycling targets to 70% in 2025 and 90% in 2030 – higher than what the EU Commission has proposed. They must also ensure companies are required to protect human rights and the environment in all stages of battery production.