There are just 20 battery electric vehicles (BEVs) on sale in Europe compared to 417 conventionally fuelled models (petrol and diesel). T&E research has found that even many of these models are simply not available for sale in showrooms – notably the Opel/Vauxhall Ampera and Bolt – and others have long waiting times due to a lack of manufacturing capacity, such as the Hyundai Ioniq and BMW i3.

Data from marketing analytics specialists Ebiquity analysed by T&E also shows that manufacturers are barely even trying to sell vehicles – as evidenced by tiny marketing expenditure. On average across Germany, France, UK, Spain, Italy and Norway only 2.1% of carmakers’ marketing budget was spent on zero-emission vehicles (ZEVs) and 1.6% on plug-in hybrid models. The marketing spend on electric and hybrid cars is rarely higher than their market share, suggesting manufacturers are reacting to latent consumer demand from early adopters rather than actively growing the market share of zero-emission cars. Around 30% of German, French, and British consumers say they would consider buying an electric vehicle today.

Opel and Vauxhall had no appreciable spend on electric models; neither did Ford, Honda, Peugeot-Citroën and Suzuki. The advertising budget for battery electric cars in Norway (where more than 1 in 3 new cars sold are now electric) was much higher. BMW spends 24% of its budget on promoting BEVs in Norway, and Daimler spends 14% for its BEVs. Renault spends approximately six times more promoting its EVs in Norway (39%) than in other countries. These are all indications that companies tend to follow demand rather than create a new market.

The result of these trends is carmakers failing to hit their own EV sales targets. T&E analysis shows that sales of electric or zero-emission cars were around half the level forecasted or promised by carmakers. On average, carmakers aimed at selling 3.6% electric cars but only achieved 1.7%. This varied among companies: Volkswagen reached almost 2% EV sales while targeting 3.5%; BMW sold 4% of EVs but aimed at 10%; Renault-Nissan sold 2.5% although it targeted 8%; Mitsubishi and Audi overachieved their EV targets.

Julia Hildermeier, clean vehicles and e-mobility officer, said: “Most carmakers are failing to meet their own targets for electric vehicle sales because they are making little effort to do so. Instead they blame governments for a lack of incentives and recharging points. The reality is that if carmakers provided more choice, and marketed and sold the vehicles more aggressively, they could meet their own goals and clean up the emissions. European carmakers should put their money where their mouth is and start focusing on clean cars rather than resurrecting the market for obsolete dirty diesel cars.” 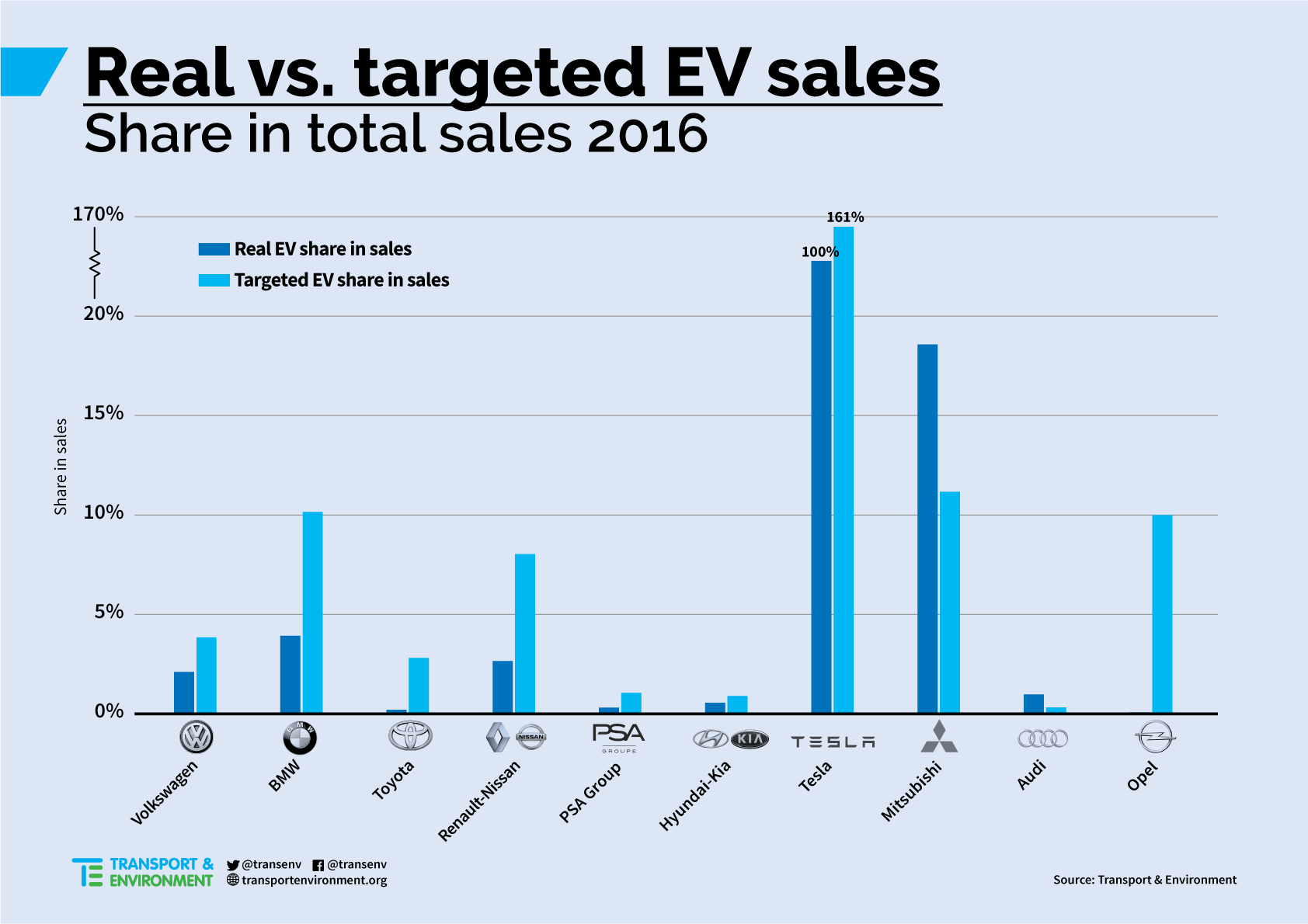 Carmakers believe the future market for electric cars will grow strongly. According to carmakers’ announcements, by 2025 around 20% of new cars sold will be electric. But past performance suggests that without regulations carmakers will fail to achieve their aspirations and continue to focus on selling diesel cars in which they have made heavy investment. Diesel cars are now in sharp decline in Europe and a niche product in the rest of the world – just 5% of cars sold outside Europe are diesel.

Julia Hildermeier concluded: “The new regulations for car and van CO2 emissions, to be proposed by the Commission in November, will determine whether Europe remains a dirty diesel island or becomes a world leader in zero-emission cars. If the Commission sets annual emission reduction targets of 7% and a zero-emission vehicle sales target of 15-20% for 2025, this bold policy will effectively trigger a significant shift in the market and ensure zero-emission vehicles and their batteries are made here in Europe. Without effective targets electric cars will largely be made in China, the world’s biggest market with strong EV sales targets, and imported back into Europe. Bold policy will deliver a good outcome for industrial output, jobs and the environment.”

Today, T&E hosts a full-day conference on how European car regulation can drive down emissions, accelerate the transition to electric vehicles while enhancing the global competitiveness of EU business.