Former Italian prime minister Enrico Letta, ex-WTO head Pascal Lamy and former finance minister of Germany Hans Eichel were among the signatories who proposed that some of the revenue generated would help address the €12 billion-a-year gap left as a result of the UK’s departure. But they said the bulk of the money would go to member states – enabling them, for example, to reduce labour taxes.

T&E’s freight policy officer, Samuel Kenny, said: ‘The EU has long considered energy taxes as a way to cut Europe’s emissions. Now, with a budget gap looming and some of Europe’s top economists backing the idea, the logic behind a green tax shift to transport, the biggest source of climate emissions in Europe, is more compelling than ever.’

Transport is Europe’s biggest climate problem, representing 27% of the bloc’s greenhouse gas emissions. T&E highlighted that the undertaxed aviation sector is responsible for a growing part of these. It estimates that taxing aviation fuel for domestic and intra-EU flights – which are currently tax free – at the EU minimum rate of 33 cents/litre could generate about €9.5 billion in additional revenues each year.

Abolishing the exemptions and applying a 15% VAT to all passenger transport could generate a further €17 billion while a common ticket tax on EU departures could generate around €11 billion – or more. Ticket taxes are widely levied around the world. 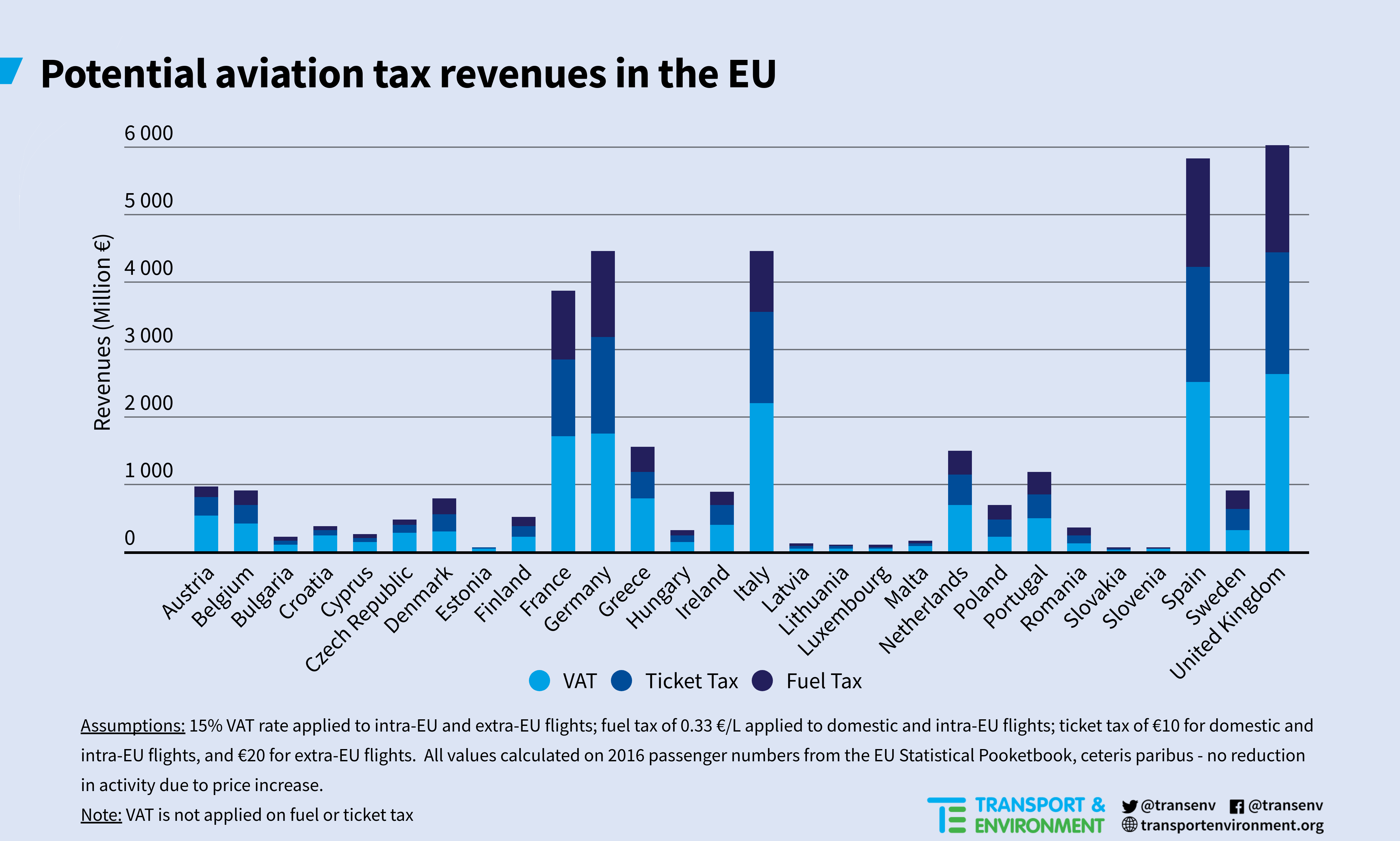 Samuel Kenny concluded: ‘Taxing airline fuel and flight tickets makes sense. Aviation is the quickest and cheapest way to heat the planet while at the same time the transport mode most heavily subsidised by governments. Plugging these tax gaps can both accelerate the fight against climate change and solve the EU’s budget problems in one fell swoop.’

EU rules on VAT are currently being revised and it appears rules on how to calculate and levy VAT on passenger transport will be simplified. But instead of abolishing VAT breaks for airline tickets, the European Commission wants to give member states greater flexibility on VAT rates so that the current exemptions could become entrenched. This would effectively mean that, for tax purposes, weekend flying breaks in Europe be treated the same as “necessities” such as foodstuffs, baby items or pharmaceutical products.

T&E aviation director, Bill Hemmings, said: ‘The Commission proposal is a missed opportunity. Both to make passenger transport VAT mandatory under much simplified rules and to boost tax revenues just when the EU is struggling to make its next seven-year budget add up. Under the definitive VAT regime in 2022, a negative list will be drawn up of goods and services which must be subject to standard VAT rates. This is to prevent revenue erosion under the new flexible rates regime. Passenger transport and aviation in particular should be added to that list.’