Charging infrastructure will keep pace with the growth in the number of electric vehicles resulting from the EU tightening its clean car rules, new analysis shows. Up to 10.4 million public charging points could be installed across Europe by 2035 if car CO2 targets are strengthened in line with the EU’s Green Deal commitments, according to the modelling by Transport & Environment. T&E said EU lawmakers can increase the ambition of the car CO2 law beyond what the European Commission has proposed with confidence that there will be enough charging points. 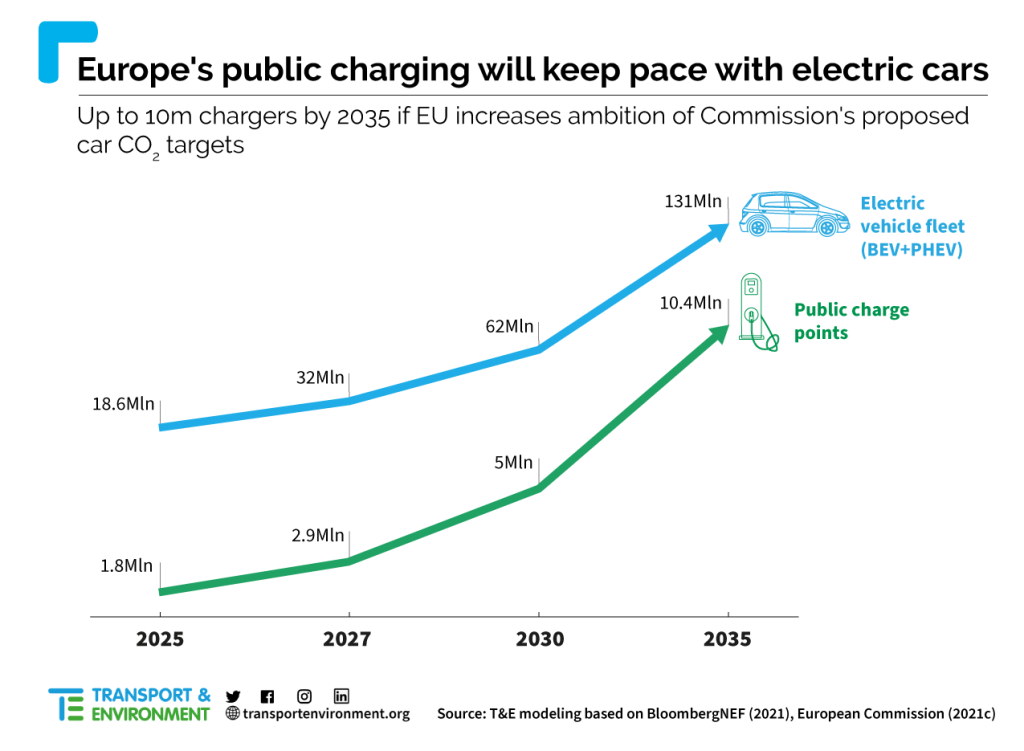 There could be up to 5.1 million public charging points by 2030, the analysis finds, as a result of the EU’s draft infrastructure law, which requires member states to roll out charging infrastructure in line with the expansion of the EV fleet. Currently there are around 340,000 public chargers in place, but the EU Commission and governments acknowledge that a lot more will be needed. T&E modelled the expansion of the public charging network if the EU increases its car CO2 targets in 2025 and 2030 and sets a new interim target for 2027 [1].

Fabian Sperka, vehicles policy manager at T&E, said: “Public charging is a key concern for drivers, and governments will be required by law to address this by expanding national networks in line with the electric car fleet. European lawmakers don’t need to hold back on setting higher car CO2 targets for fear of a lack of charge points.”

While very high numbers of public chargers might appear desirable, the vast majority of charging will continue to be at private chargers at home and work. The European car industry lobby wants 31 million public chargers by 2035, according to T&E’s analysis of its demands. This would lead to chargers being used less than one hour a day – far below the 3.6 hours needed to be financially viable according to the industry group’s own report [2].

T&E said the car industry’s targets are unnecessarily high and would require huge public subsidies on a continuous basis for the charging network. The industry targets are based on unrealistic assumptions that 60% of charging will be public and that the average electric vehicle in 2030 will be less efficient than today’s models [3].

Fabian Sperka said: “The more the merrier does not apply to the charging business. Massively overbuilding the charging network, as some in the car industry demand, is unnecessary and would require taxpayers to foot the bill. Europe can have up to 10 million public chargers in place to meet the needs of the expanded electric car fleet by 2035 and have a financially viable network. Unrealistic infrastructure demands should not get in the way of ambitious car climate targets.”

MEPs and governments are currently deciding on an EU Commission proposal for car CO2 reduction targets in the 2020s and for all new cars sold in 2035 to be 100% zero-emissions.

[1] T&E modelled the amount of public charging that will be available if EU lawmakers set new car CO2 targets for 2025, 2027, 2030 and 2035 in a trajectory compatible with the European Green Deal.

[3] The car industry lobby, ACEA, assumes that 60% of charging will be at public chargers in 2030, while the EU Commission assumes 15-40%. The industry also assumes the average battery electric vehicle (BEV) will consume 20 kWh/100km in 2030 while today popular models such as the Tesla Model 3 and VW ID.3 consume only around 16 kWh/100km. https://www.acea.auto/files/ACEA_Position_Paper-Alternative_Fuels_Infrastructure_Regulation.pdf

Report: ‘Charging’ for phase-out: Why public chargers won’t be a block on EU’s combustion car phase-out