The lack of charging infrastructure, notably public points for those without private garages, is often raised as a key concern against faster electric car (EV) adoption. As the EU’s car CO2 targets propel electric car sales to new highs, with battery electric vehicles accounting for every 10th car sold last year, are the chargers ramping up accordingly? Crucially, as Europe plans to have 100% new car and van sales be zero emission from 2035, will charging be a roadblock? T&E answers these questions in this report and demonstrates how the public charging network will be sufficient.

Despite the absence of mandatory targets across Europe today, the public charging infrastructure throughout the EU has grown significantly. In 2021 almost 340,000 public chargers were already in place. This was triple the numbers recorded in 2018; a clear indicator that market dynamics are already gaining momentum as chargers follow the EV market growth.

Furthermore, the infrastructure is ramping up where the uptake of electric cars is highest. While 62% of public chargers in 2021 were located in three countries: Germany, France and the Netherlands. In 2021, 61% of all EVs were registered in those three countries. 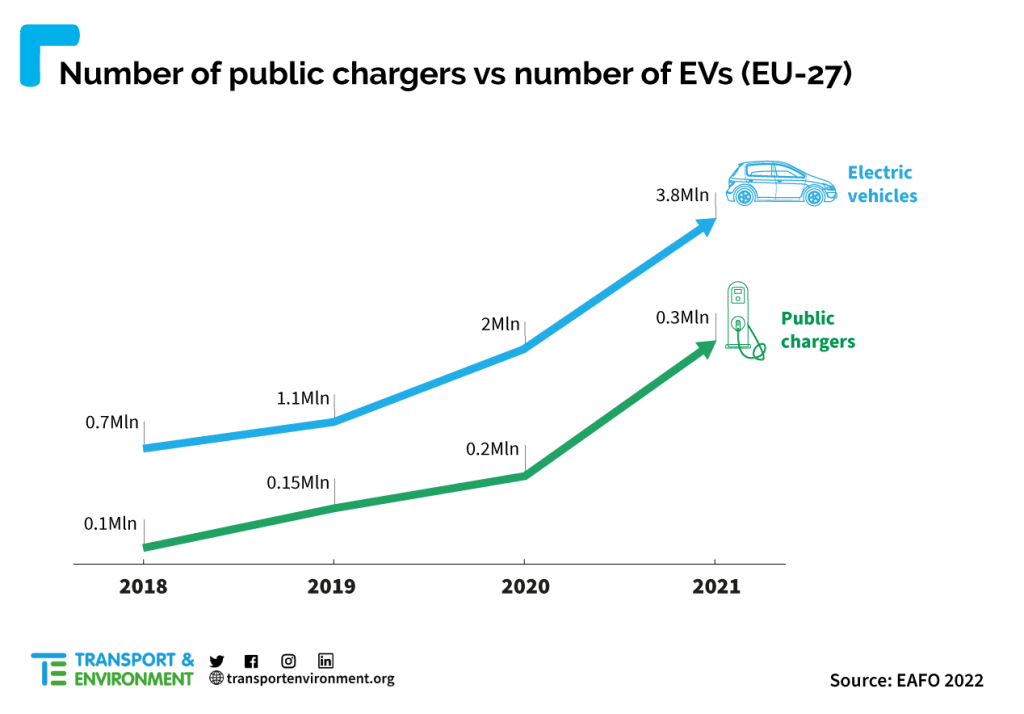 But as the electric car market is entering mainstream and growing in all countries, a lot more public charging will be needed in the coming years. To ensure member states ramp up their public networks on time, the European Commission proposed a regulation on the deployment of alternative fuels infrastructure in July 2021. The draft law obliges member states to always ensure there is a public charging network that is sufficient to fulfill  the charging needs of their respective EV fleets. At the very heart of this proposal lies a ‘fleet based target’ – requiring at least 1 kW of public charging power to be available per each battery vehicle – that increases in line with EVs registered in a country.

To determine the actual public charging demand going forward, three main factors are decisive: (1) the share of public vs. private charging, (2) the utilization rate of the network i.e. the time a charger is used on average per day and (3) the anticipated electricity consumption of future EVs. Public charging will likely play a less important role than often assumed by some, not exceeding 30% of all charging events. Given the ubiquity of the power grid, private charging at home, work or on daily errands will remain the dominant form of charging. This has the added benefit of being cheaper for drivers. The utilization rate of the network will need to increase to enable a sound viable business case; T&E assumes a utilization rate of between 8.6% and 12.5% in this analysis. The energy consumption (or efficiency) of new EVs is constantly improving , e.g. Mercedes recently announced a fully electric vehicle with an average consumption of 10 kWh/100km. T&E assumes a moderately conservative efficiency of 14.8 kWh/100km in this analysis.

Based on the above assumptions and the design of the newly proposed AFI regulation, T&E has modeled the amount of public charging that will be available in the different light-duty EV (cars & vans) uptake scenarios: the Commission Cars CO2 proposal, the scenario consistent with the amendments of the lead MEP in the European Parliament (ENVI draft report) and T&E’s Green Deal (Road2Zero) compatible trajectory. Because the AFI public charging parameter is linked to the number of EVs in the fleet, the required public chargers increase accordingly with the ambition on the car and van CO2 side.

Depending on the ambition of the CO2 standards, the results of this analysis show that between 3.6 and 5.1 million chargers will need to be deployed across Europe by 2030. By 2035 – the envisaged phase out date for new cars and vans with an internal combustion engine – this number will rise to 8.2 to 10.4 million chargers. The numbers of chargers are highly dependent on the assumptions around the ratio of normal (<22 kW) and  fast chargers (>22 kW): having more fast chargers that provide more power will result in less chargers needed to serve the same fleet. The numbers are therefore indicative and assume a 50/50 split between normal and fast charging. But regardless of this assumption, the actual power and charger numbers increase in line with the higher car CO2 targets in all scenarios. The very regulatory design (or the fleet-based kW targets) ensures that the deployment of chargers in each member state will always follow the uptake of EVs.

Dangers of overbuilding the network

T&E also ran the scenario with the power per EV recommendation from the EU car industry lobby, (ACEA), that wants to see 3 kW per BEV (and 2 kW per PHEV). Based on these targets member states would need to deploy between 9.8 and 14.4 million chargers by 2030, rising to between 24.6 and 31 million chargers in 2035. While more public chargers might be appealing at first glance, the concerns with these high numbers are many fold. It would result in low utilization rates – below 5% – meaning the public charging infrastructure would need to be continuously subsidized. Lower utilization rates can be a necessary side effect for EV markets that are only starting to develop. In the medium to long term, however, the political goal should be to ensure that a charging network becomes economically viable. Thus a network must be able to sustain itself financially. This is only possible if the utilization rates increase significantly over time. A report recently commissioned by ACEA is pointing out that the average utilization rate of the network needs to be at 15% to make a network economically viable. The ACEA AFIR recommendations however would make it impossible to ever reach this rate. It would essentially undercut it by more than three times.

The last scenario that was analyzed is the approach T&E is recommending to policy makers on AFI: to keep the ‘fleet based’ target proposed by the Commission in the long term. But having higher targets for low BEV shares. This entails starting with a higher public charging power share per BEV (3 kW per BEV) if the fleet share is below 1% and gradually decreasing as the market matures to be at 1 kW per BEV once the share hits 7.5%. Following this approach will accelerate the deployment of charging infrastructure in the short and medium term. It would also significantly increase the minimum number of chargers in member states where EV adoption is still slow. At the same time the approach ensures that once a certain maturity of the EV market is reached, an overbuilding of the public charging infrastructure is avoided and higher utilization rates are ensured. 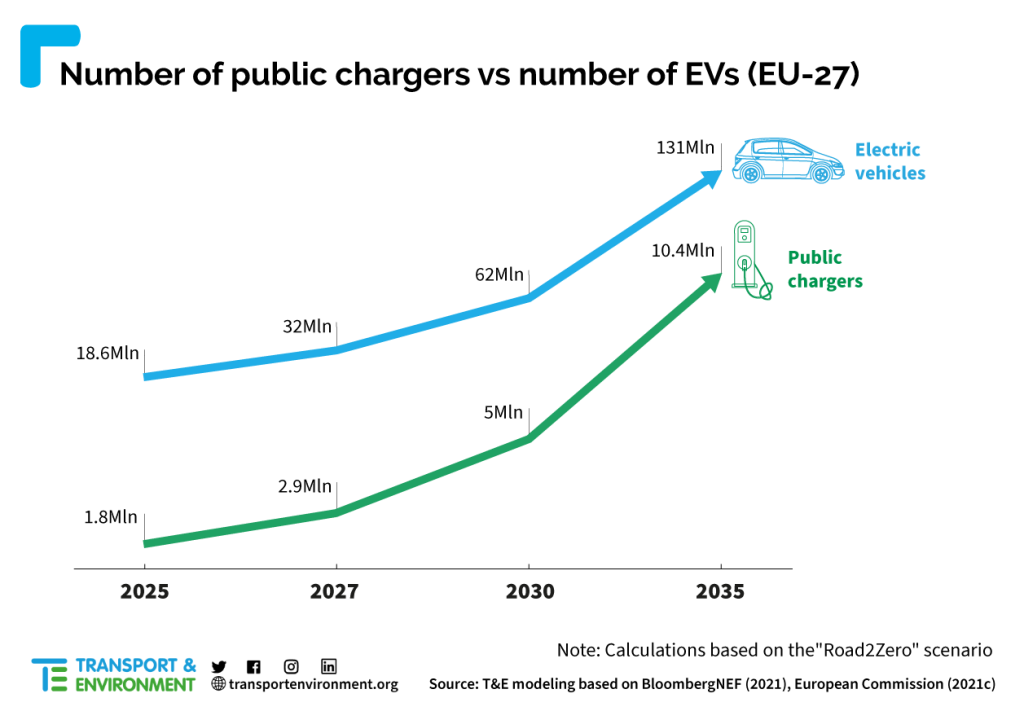 The development of the public charging infrastructure in Europe is on track and is largely matching the accelerating uptake of EVs. The mandatory targets proposed in the AFI regulation will ensure at all times that the number of public chargers is on par with the number of EVs.