There is a postcode lottery for electric car charging points in the UK, a new study shows, with ample infrastructure in some areas and a charging desert in others, particularly in the east and south-west of England. Green group Transport & Environment (T&E) has launched an interactive map showing progress across the UK and highlighting the leaders and laggards. The study and map identify ways to expand public charging at the pace required – a need identified by a Public Accounts Committee report published today.

London has the most extensive network, with areas such as Kensington and Chelsea, Westminster and Wandsworth already having sufficient numbers of chargers to meet the charging needs from the electric cars projected to be on the road in 2025. But the east and south-west of England have only 18% of the chargers estimated to be needed by 2025, T&E’s study shows. The worst performing local authority areas – Castle Point, Forest of Dean, Stockport, Swindon, Brentwood and Fenland – have less than 5% of the charging needed in 2025.

Click on the map or use the drop-down menu.

Greg Archer, UK director of Transport & Environment, said: “The current network is adequate in most places, but we must level up access to public charging throughout the UK and end the postcode lottery. Local authorities should be required to provide a right to charge for residents and visitors. It’s up to the government to give the funding and support needed to make this happen.” 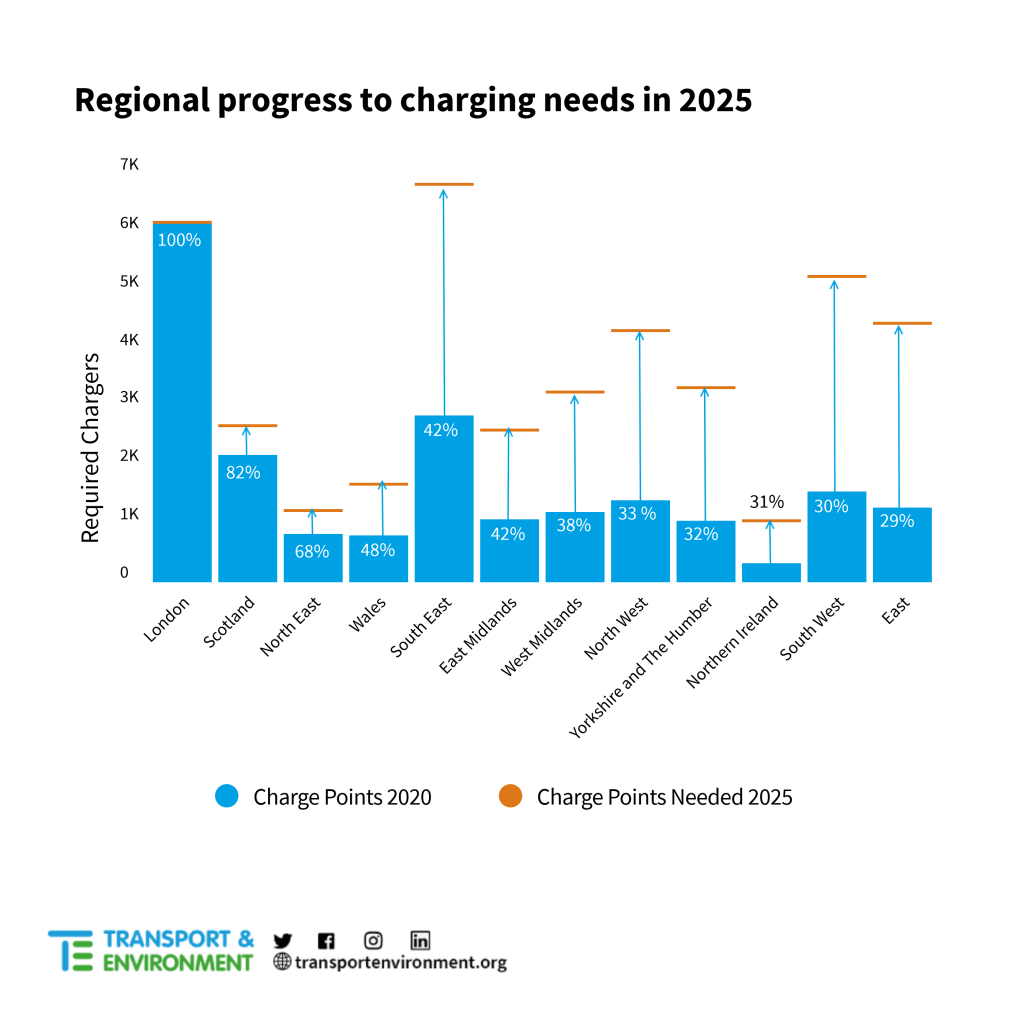 Regional progress to charging needs in 2025

A report published today by the Public Accounts Committee states that it is “not convinced that the government has sufficiently thought through how the charging infrastructure will expand at the pace required to meet the ambitious timetable to phase out petrol and diesel vehicles.” T&E’s research shows that continuing to install new chargers at the current rate of around 800 per month will provide the UK with a sufficient network by 2025. But after 2025 the rate of installations will need to nearly double as the number of electric cars grows quickly and more drivers without off-street parking begin to use them.

Workplaces and carparks should be equipped with a steadily increasing number of charge points so cars can be charged wherever they are driven, T&E said. With the range of electric cars increasing, most drivers will only need to charge once a week or less, given typical car use.

Greg Archer concluded: “The actual experience of most electric car users is far better than perceptions of charging. But to reassure more drivers who want to shift to electric, we need sufficient infrastructure throughout the UK that is both reliable and easy to access. The government doesn’t need to pay to install chargers, but it should use regulations to ensure there are enough sites in workplaces and other car parks, and that the costs of connecting to the electricity grid are affordable.”

The work undertaken by T&E was informed by a study by Cenex on tackling the barriers to charging roll out, which is available here.