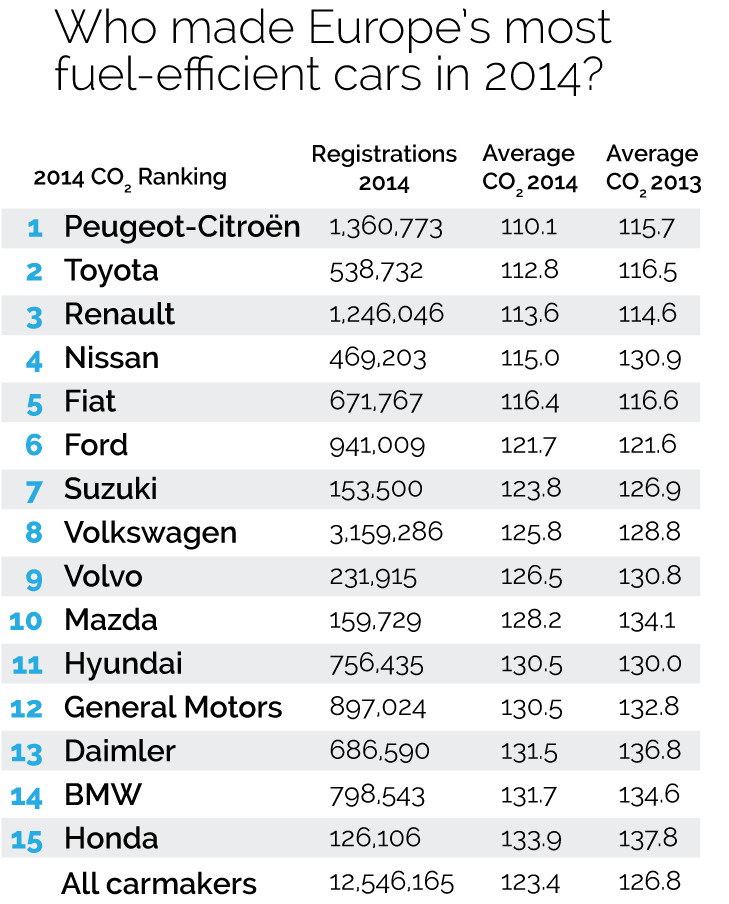 Why should you care how clean your car is? Besides helping to tackle global warming, the lower a car’s carbon emissions, the cheaper it is to run and tax! For every 10 grams of CO2 per kilometre a car reduces its emissions a typical new car driver will use two less tanks of fuel a year – saving them nearly €150.

Bringing up the rear, Honda landed the inauspicious award of making the least fuel-efficient cars among major carmakers. Each new Honda car sold averaged emissions of a whopping 133g CO2/km.
The leaps in fuel efficiency are no more in evidence than at Nissan, which achieved a 12.1% reduction in CO2 emitted last year – the most improved fuel efficiency in 2014. Last year’s upgrade of the Qashqai, its biggest seller, brought a range of new engines which were on average 20g CO2/km more efficient.
In the last eight years since the EU proposed fuel economy standards for cars, average emissions have fallen by 37g CO2/km – improving fuel economy by 1.5 litres per 100km. Over this time Nissan has reduced its emissions by nearly half, demonstrating the untapped potential to improve fuel efficiency. But work by T&E shows there is still huge potential to go further. The European Commission is currently deciding whether the rules should be extended to 2025. 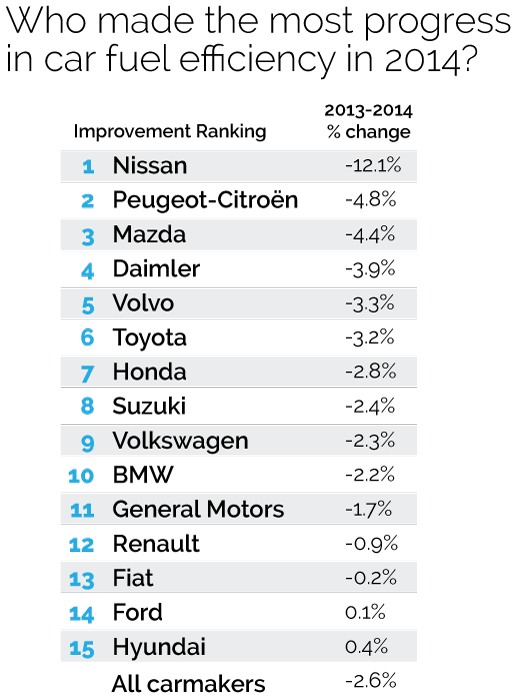 Greg Archer, clean vehicles manager at T&E, said: “Because of EU rules, companies like Nissan are going the extra mile to fit fuel-efficient technologies to their cars and squeeze more kilometres from each tank of fuel. This means more money remains in drivers’ pockets, there is less harmful pollution, and fewer oil imports bring a boost to Europe’s economy. It’s a win-win formula that needs to continue.”

Only Hyundai and Ford bucked the trend by actually increasing their emissions in 2014. In fact Hyundai was named winner of the award for least progress in fuel-efficiency in 2014, after their cars increased emissions by 0.4% in the year.
Cars that lie
But consumers are warned to take the official fuel economy figures with a generous pinch of salt as carmakers are manipulating tests to claim that their cars require less fuel – costing the average motorist far more in petrol and diesel charges. T&E says carmakers exploit the 40-years-old official tests to such an extent that only half of the progress measured with the official figures is achieved on the road. It’s calling for the European Commission to introduce a more-realistic test – the World Light Duty Test Procedure (WLTP) – without delay.
Greg Archer concluded: “Lawmakers should protect motorists from carmakers gaming official tests. We need the new test to be introduced without further delay and a new system of labelling to give drivers reliable information to make informed purchase decisions.”