The fossil fuel industry is hoping e-fuels can help combustion engine cars to escape a proposed EU sales ban in 2035. Lobby groups say that allowing sales of new combustion vehicles that run on synthetic fuels will help scale up the technology to make the existing car fleet climate neutral. But new analysis, based on the oil lobby’s own data [1], shows there will only be enough synthetic fuels to power around 2% of all the cars on Europe’s roads by then. 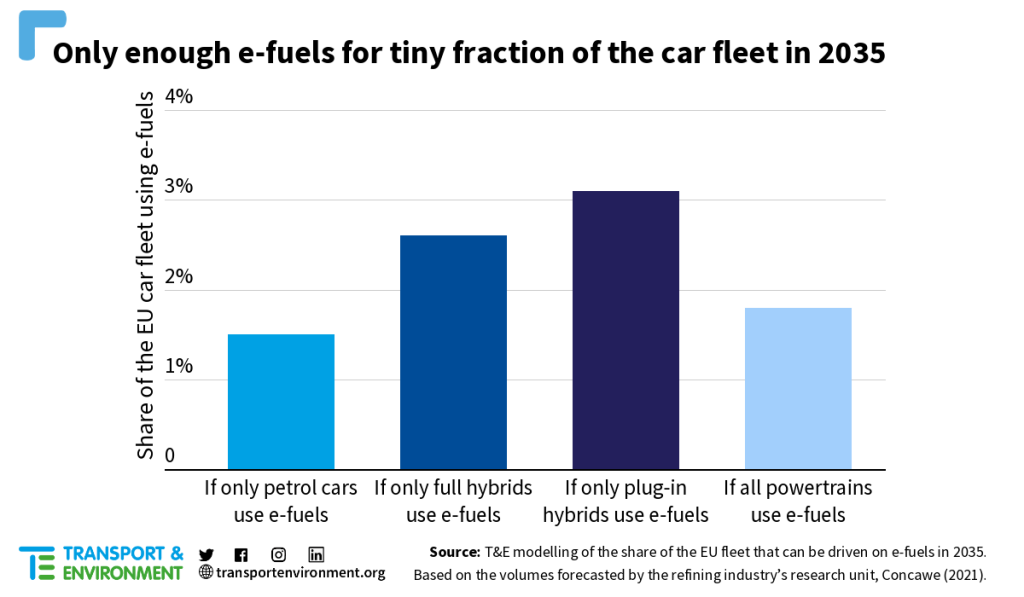 The production of e-fuels, which are chemically similar to petrol and diesel, will still be in its infancy by the time of Europe’s planned phase-out of sales of internal combustion cars. Just 5 million cars out of the EU’s projected fleet of 287 million could fully run on synthetic fuel in 2035, according to green group Transport & Environment’s (T&E) analysis of the volumes forecasted by the industry. T&E said e-fuels in cars are a Trojan Horse for oil companies and engine-makers to delay the transition to zero emission technologies. It called on EU lawmakers to resist industry pressure for an e-fuels loophole in the phase-out rules.

Yoann Gimbert, e-mobility analyst at T&E, said: “E-fuels are presented as a carbon-neutral way to prolong the life of combustion engine technology. But the industry’s own data shows there will only be enough for a tiny fraction of cars on the road. Lawmakers should close the door to this Trojan Horse for the fossil fuel industry.”

The industry’s forecast is based on e-fuels produced in the EU, but its projection includes carbon captured from industrial emitters [2] and it is not clear how much of the electricity would be certified 100% renewable [3]. The number of cars that could run on synthetic fuels would be even lower if only carbon neutral e-fuels – those made entirely from additional renewable electricity and CO2 captured directly from the air – were used.

T&E said industry plans to import climate neutral e-fuels on a huge scale are unrealistic as the production plants and global standards to certify synthetic fuels do not exist. Taking e-fuels from other countries would also delay efforts in less developed economies to decarbonise their own transport and power sectors.

Yoann Gimbert said: “In Europe, e-fuels for cars would suck up renewable electricity needed for the rest of the economy. It is also naive to assume that developing countries, some of whom lack power for their basic needs, would spare their renewables for e-fuels in Europe’s cars just to suit the vested interests of engine makers. Synthetic fuels that are made in Europe should be prioritised for planes and ships, most of which cannot use batteries to decarbonise.”

Synthetic fuels are also a far less environmentally friendly solution for cars than battery-powered electric cars. By 2030, an electric car will emit 53% less CO2 over its lifecycle than a car running on e-fuels, the most recent life cycle analysis confirms.

Burning e-fuels in cars will also not alleviate toxic emissions from one of the largest sources of air pollution. Last year, lab tests showed that a car burning synthetic fuels pumped out as many toxic NOx emissions as burning fossil fuels would. Synthetic fuels will also remain expensive to produce for some time, and running a car on e-fuel will cost the average driver €10,000 more over five years than running a battery electric car. E-fuels in road transport are highly inefficient compared to direct electrification: swapping just 10% of cars to e-fuels and another 10% to hydrogen would push up electricity demand by 36%.

EU lawmakers are currently finalising the rules for the proposed phase-out of combustion engines in 2035. The next round of negotiations will take place on 27 October.

[1] This e-fuel production projection is based on the most optimistic scenario forecasted by Concawe, the refining industry’s research unit. In this scenario, synthetic fuels are deployed across the whole transport sector including road, aviation and maritime transport. E-fuels volumes in this scenario are based on projected installation of new e-fuel production units in Europe.

[2] See Concawe, page 28. “…this assessment does not differentiate between direct air capture (DAC) technologies or CO2 captured from concentrated sources”.

See also Concawe, page 24. “…captured either from a concentrated source (flue gases from an industrial site) or from the air (Direct Air Capture)”.

Producing e-fuels with carbon captured from fossil sources will potentially lock-in investment in fossil sources, slow down their decarbonisation and will also result in a delay in investments and development of direct air capture.

[3] See Concawe, page 28. “As an initial estimate, this assessment is based on smaller-size units connected to the grid and certifying the renewability content of electricity either by direct Purchase Agreements or other certification mechanisms”.

It is unclear what “other certification mechanisms” refer to and whether these mechanisms ensure the additionality of the renewable electricity and ensure that the location and time of electricity production matches consumption.