As carmakers gear up to launch new electric car models at the Frankfurt Motor Show (IAA) tomorrow, new analysis forecasts car manufacturers could sell up to one million battery electric and plug-in-hybrid vehicles (EV) next year in the European Union [1], consolidating the bloc’s recent position as the world’s second largest electric car market. The analysis conducted by Transport & Environment (T&E) estimates that in 2020 EV sales will be around 5% (3-7% range), with 2021 EV sales around 10% (5-12% range) [2] depending on the different strategies pursued by carmakers to comply with EU CO2 targets for new cars. The analysis shows that after years of limited efforts car manufacturers are finally preparing to bring to market the large numbers of more fuel efficient and affordable electric cars required to comply with Europe’s Car CO2 law.

The report shows that EU carmakers are only half way to achieving their 2021 CO2 target (or 25g/km away from 95g). This is explained by carmakers’ strategy to promote sales of inefficient, higher-emitting SUVs and their decision to delay the investments into clean technologies required to meet the car CO2 law (in force since 2009) until the last moment. But based on new data from IHS Markit, which anticipates a tripling of EV models by 2021, carmakers will be able to meet the 2020 and 2021 climate targets if they deliver on their own plans to boost the production of electric vehicles (both zero emission and plug-in hybrid models) [3]. Beyond boosting EV sales, improving engine efficiency and fitting (mild or full) hybrid technology, some carmakers may also need to incentivise customers to opt for lower CO2 versions, for example with a slightly less powerful engine, or reduce sales of their most polluting models.

Different strategies for different carmakers
Toyota is best placed to reach its target thanks to its early investment in hybrid technology – 56% of its EU sales are now non rechargeable hybrids. The Renault-Nissan Alliance has the next smallest gap to close. This is in large part due to an early focus on sales of EVs such as the Nissan Leaf and the Renault Zoé. Volkswagen could comply through a variety of tools such as improvements to combustion engines (new petrol engine and mild hybridisation of the new Golf) and a big ramp up of EVs through its all-electric ID.3. The carmarkers with the most challenging prospects are: Honda, Ford and Hyundai-Kia, although the latter has recently begun a significant ramp up of its EV and hybrid portfolio and sales. Volvo also has a large gap to close but is expected to comply by shifting a large part of its fleet to plug-in-hybrid technology. Fiat-Chrysler would likely not be able to meet its target but will now comply thanks to its pooling arrangement with Tesla. The report finds that increasing EV sales is the most future-proof strategy because complying with the 2025 and 2030 CO2 targets will be cheaper with zero-emission vehicles. The European market is therefore likely to follow that in China – the world’s largest auto market.

Julia Poliscanova, director of clean vehicles at T&E, said: “For years carmakers did nothing to reduce their emissions. Now, thanks to the EU car CO2 law, they are finally preparing to start selling the more fuel efficient and electric cars the climate emergency demands. This means we are going to see good quality, affordable EVs in the next year or two, not ten, and that’s excellent news for consumers who’ll be saving lots of money at the pump.” 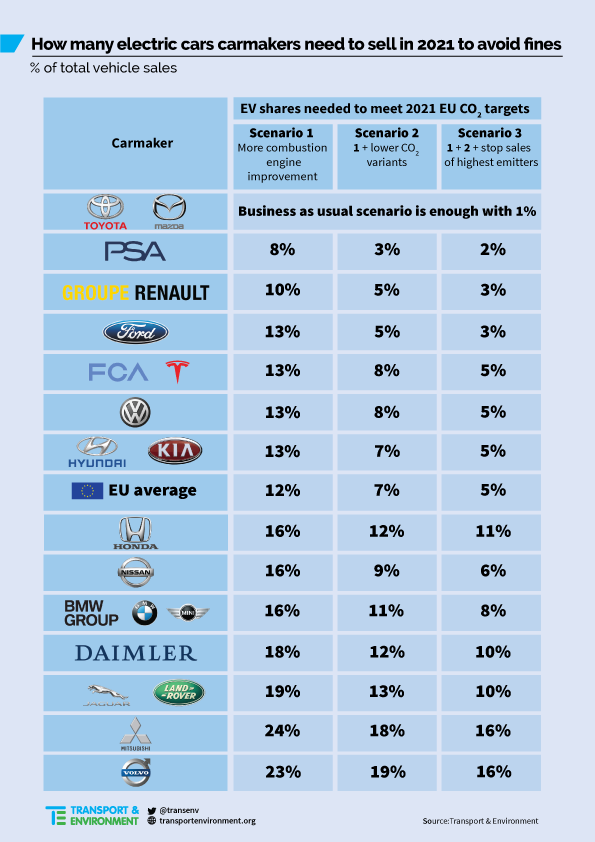 SUVs, not diesel decline are to be blamed for the recent jump in CO2
The report also looks at the causes for the recent increase in CO2 emissions from new cars. Contrary to carmakers’ claims, the report shows that the collapse in diesel car sales is not the main cause for the recent rise in CO2 emissions from new cars. Since 2013 the SUV sales boom has resulted in a 2.6g of CO2/km increase, 10 times more than the increase of 0.25g of CO2/km attributed to the decline in diesels [4]. Sales of SUVs in Europe have rocketed from 7% in 2009 to 36% in 2018 and are expected to reach nearly 40% by 2021. 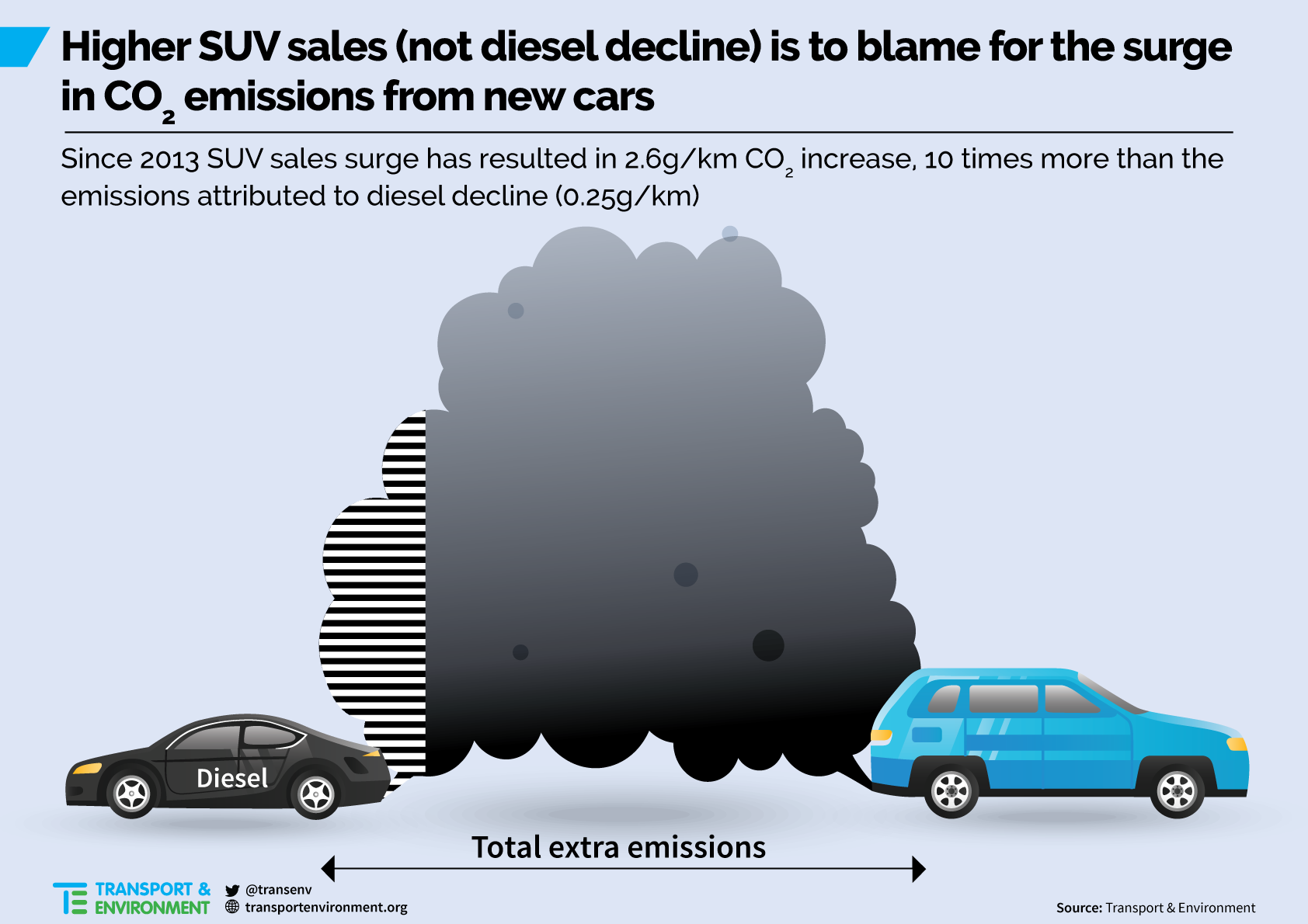 The good, the bad and the ugly in EU car emissions
Taxes decided by countries significantly influence which cars are bought in each member state. The highest average new car CO2 emissions are in Estonia and Luxembourg which still average over 140 gCO2/km. The lowest is in Portugal and the Netherlands (106 gCO2/km). Portugal has a relatively big share of EVs and also sells many smaller cars. The Netherlands has one of the highest shares of EVs in Europe, aided by vehicle taxes that strongly reward buying zero-emission models.

Another country with supportive taxation system is Sweden, which has the highest share of electric cars (plug-in hybrid and battery electric) in the EU with 8.4% of total vehicle sales, followed by the Netherlands with 6.8%. Norway achieved much higher levels (49%) of which 31% were zero-emission. Norway has recently joined the CO2 regulation so electric cars sold there will count towards EU targets in 2020/21. The biggest share of battery electric cars in the EU was the Netherlands (5.9%) and that for plug-in hybrids was Sweden (6.4%).

Julia Poliscanova said: “The climate emergency requires selling the last combustion engine car by the early 2030s, so governments need to focus on accelerating the switch to cleaner cars beyond what is required by the car CO2 law. Their focus should now be on rapidly electrifying company car and taxi fleets, tax schemes that reward buying zero emission cars and penalising those choosing gas guzzlers, and facilitating the roll out of charging points at home, at work and along motorways.”

Transport is Europe’s biggest climate problem, representing more than a quarter (27%) of the bloc’s total greenhouse gas emissions. Cars emit 44% of transport emissions and are still rising due to the business decisions made by carmakers. If the EU is to achieve the Paris Agreement goals of limiting global temperature rise to 1.5ºC, car emissions must be zero by 2050 at the latest, meaning the last diesel or petrol car should be sold ideally by 2030, and by 2035 at the latest. 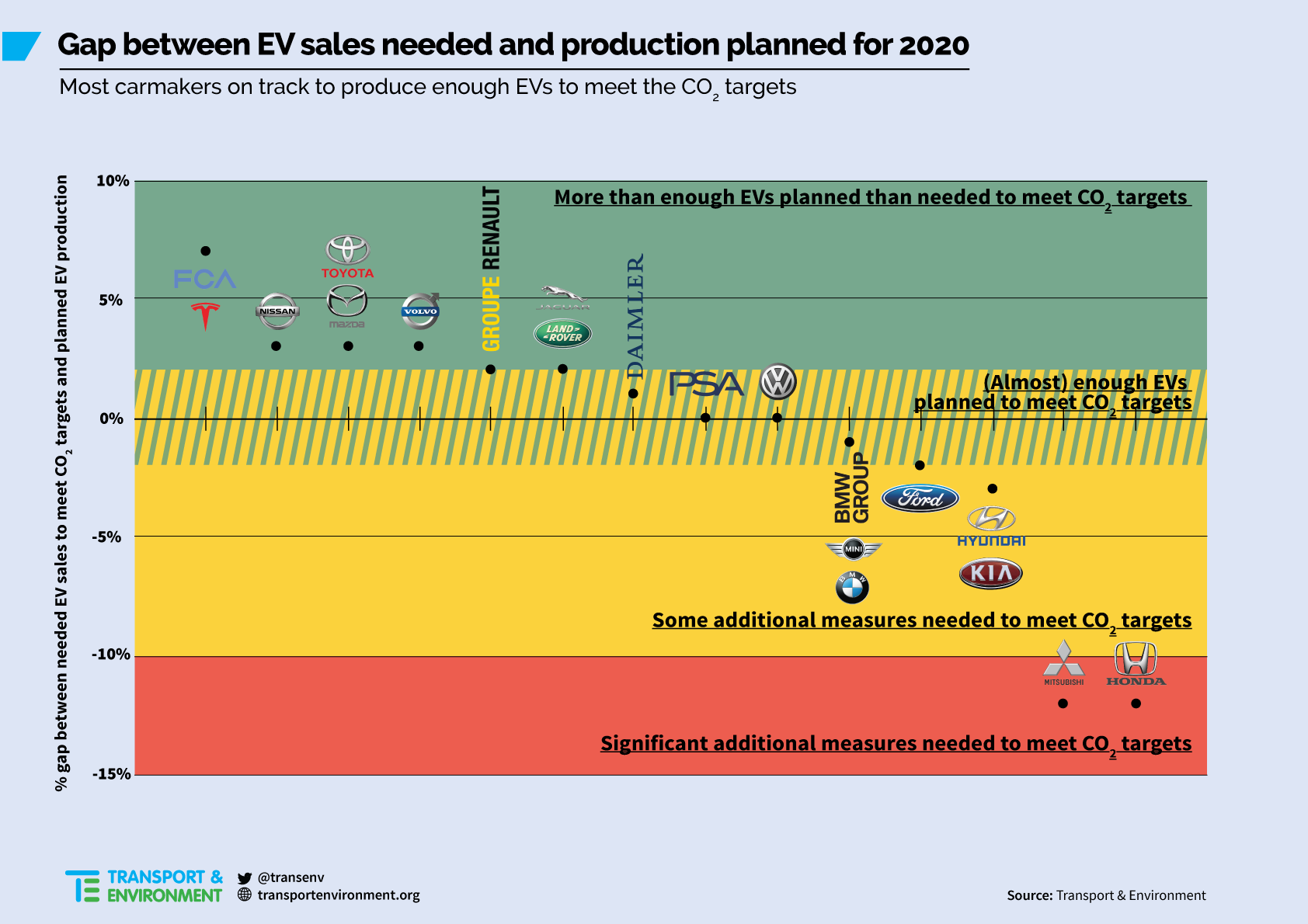 [1] A battery electric car like the Renault Zoé or the upcoming Volkswagen ID.3 is propelled by a motor, and runs purely on electricity so it does not burn a single drop of fossil fuel. A full hybrid car like the Toyota Prius or the Hyundai Ioniq runs mainly on a petrol engine with the assistance of an electric motor. The very small fitted battery cannot be charged and barely allows to drive the car in a zero-emission mode (about 1-2 kilometres maximum). A plug-in hybrid car like the Volvo S90 T8 is a full hybrid car but fitted with a bigger battery that can be charged, and allows to drive the car in a zero-emission mode for a longer distance (few tens of kilometres).

[2] The report predicts that around half of EV sales in 2020/21 are expected to be zero-emission vehicles such as battery electric cars, and the other half plug-in hybrid cars.

[3] Carmakers are investing €145 billion in electrification. Sixteen large-scale lithium-ion battery cell plants are confirmed or likely to come online in Europe by 2023. The confirmed plans alone will deliver up to 131 GWh of battery production capacity, according to data from Benchmark Mineral Intelligence – enough to cover the estimated 130 GWh that will be needed by EVs and stationary storage batteries across Europe in 2023.