Julia Poliscanova, clean vehicles and air quality manager at T&E, said: “This scandalous stalemate results from national governments prioritising the interests of domestic carmakers above citizens’ need to breathe clean air. Although national vehicle regulators in Europe have been captured by the car industry, the European Parliament continues to demand that carmakers will be held to account.”

Of the 26 million grossly polluting diesel cars on Europe’s roads [1], just 20 per cent could be fixed based on the recalls planned so far, according to T&E’s analysis. The vast majority of these are the VW Group cars with illegal software, first uncovered in the US, and will be fixed. The remaining 660,000 cars from Renault, Fiat, Opel and Mercedes are subject to voluntary recalls that will only happen if customers request the car be fixed. 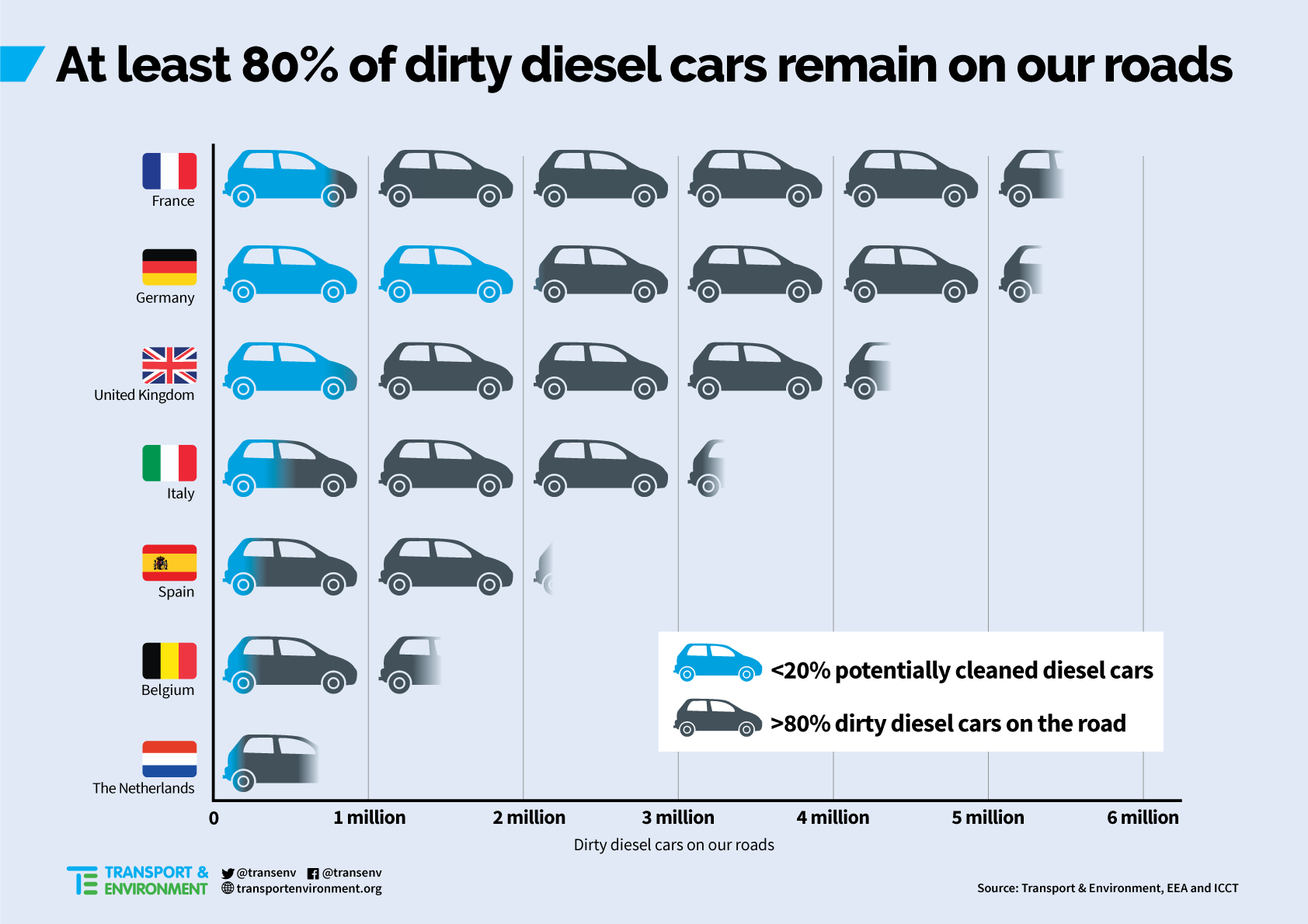 But there has been no action to require fixes that lower the emissions from 80% of the grossly polluting cars that are on the road or still in dealerships waiting to be sold. This is despite many models emitting much higher amounts of NOx emissions than the VW brands. National Type Approval Authorities are presently doing nothing to inform customers and ensure steps be taken. On Thursday the EU Transport Ministers are expected to discuss calls from Germany to change the rules on testing that they are currently ignoring.

Documents obtained by T&E show EU governments (except those of France and Denmark) are also planning to weaken proposals to strengthen vehicle testing. They want to prevent the Commission conducting independent tests and taking action when wrongdoing is found – effectively maintaining the failed status quo. Governments also plan to dilute the already weak requirements to check that all national regulators are applying the rules in a consistent way and, for the first time, check how national authorities test vehicles.

Julia Poliscanova concluded: “There is a Mexican stand-off with governments afraid to act against their own fraudulent carmakers for fear it will put their domestic industry at a competitive disadvantage. The EU urgently needs to create an independent body, as MEPs have suggested, to check how cars perform on the road. This will ensure there is consistent enforcement of the rules and that penalties are applied when there isn’t. Transport ministers have the chance this week to show they are taking deaths from diesel cars seriously and want to fix the problem but there are few signs of that happening.”

Last week the European Environment Agency increased its estimates of the deaths caused by air pollution each year to 467,000; equivalent to wiping out the population of Liverpool or Gdansk each year. Almost 70,000 of these deaths are a result of NO2 exceedances, 94% of which are caused by traffic. 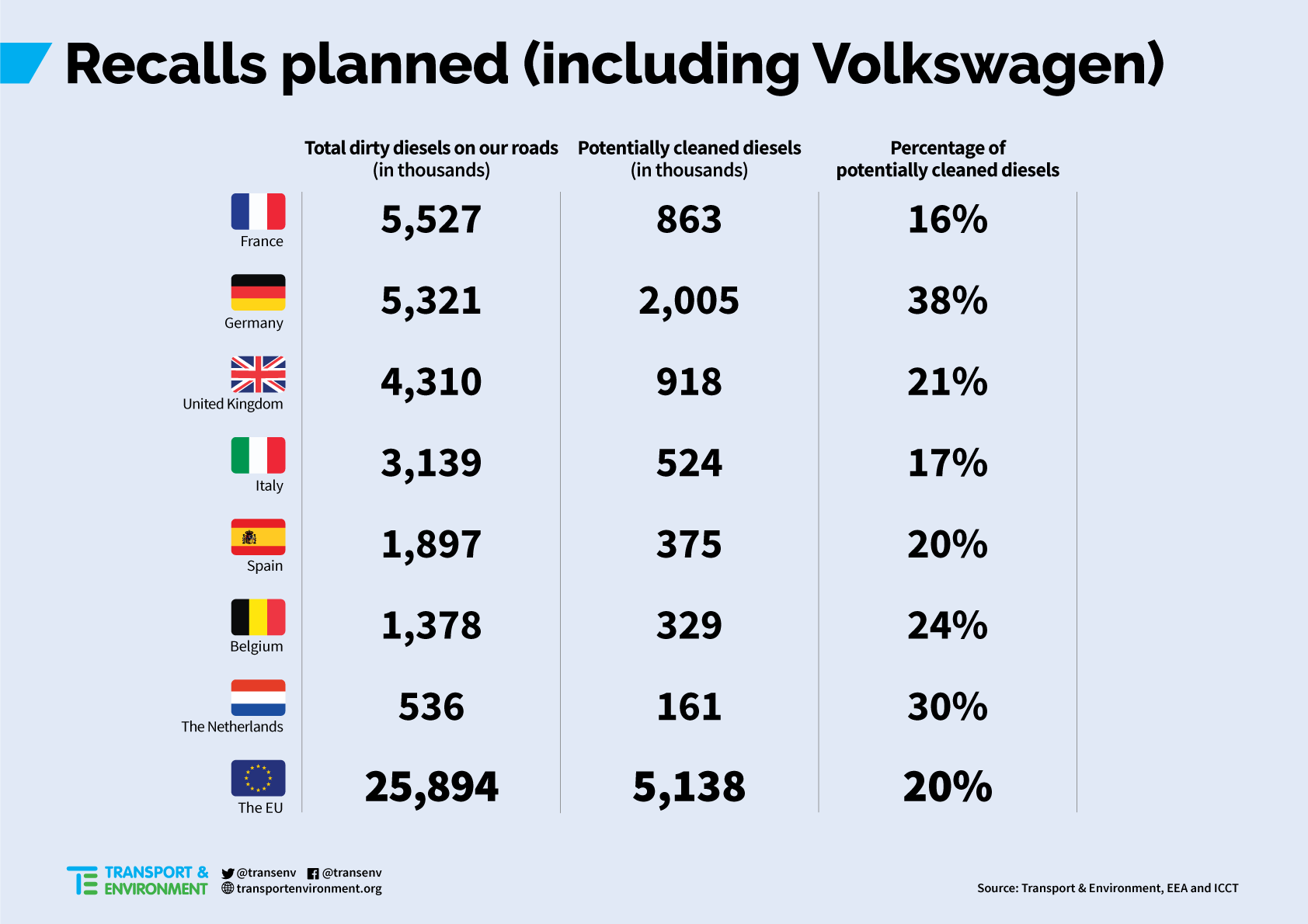 [1] More than four in five cars of the Euro 5 standard cars sold between 2010-14 produce more than three times the NOx standard (180g/1,000km) when driven on the road. Two-thirds of Euro 6 cars (most on sale since 2015) still produce more than three times the 80g/1,000km limit when driven on the road. 69% of these dirty diesel cars were sold in France, Germany, Italy and the UK. These member states also approved most of the polluting vehicles for sale and thus are the ones that can mandate recalls and upgrades.