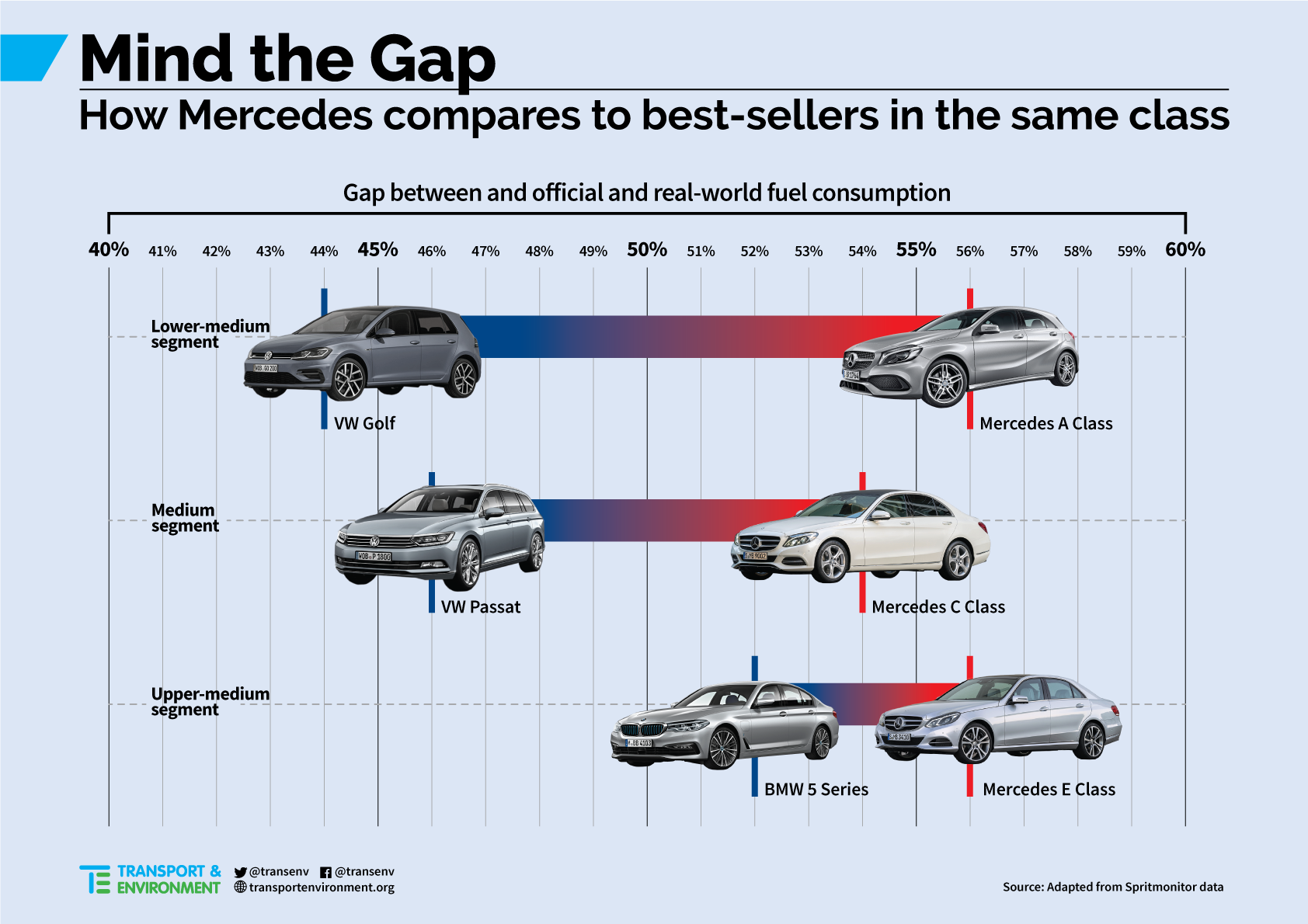 Forget about Mercedes CEO Dieter Zetsche’s stated goal to ‘be even greener’, the sad truth is that Mercedes once again tops the list of Europe’s car fuel economy cheats, T&E’s 2016 Mind the Gap report reveals. The Mercedes A and E class are the worst offenders consuming on average 56% more fuel on the road than claimed in the sales brochure.

The Mercedes C class, a medium segment car, burns 54% more fuel than advertised, significantly more than the best selling model of the segment, the VW Passat, which guzzles 46% more gas. The fuel efficiency tests are conducted in the laboratory with many loopholes and flexibilities and are prone to extensive manipulation. But even if we take into account all test loopholes and flexibilities, and clean technologies that perform better in the lab than on the road, it is impossible to explain fuel efficiency gaps higher than 50%. This raises questions whether Mercedes, like Audi, are detecting when the car is being tested and artificially lowering the emissions during the test.

Greg Archer, clean vehicles director of T&E, said: “Cars that burn 50% more fuel than advertised are deceiving consumers and cheating environmental rules. Unless we want the Americans to do Europe’s job again, the Commission and national vehicle approval authorities must investigate Mercedes and Audi and determine if they are using devices to defeat the test”. 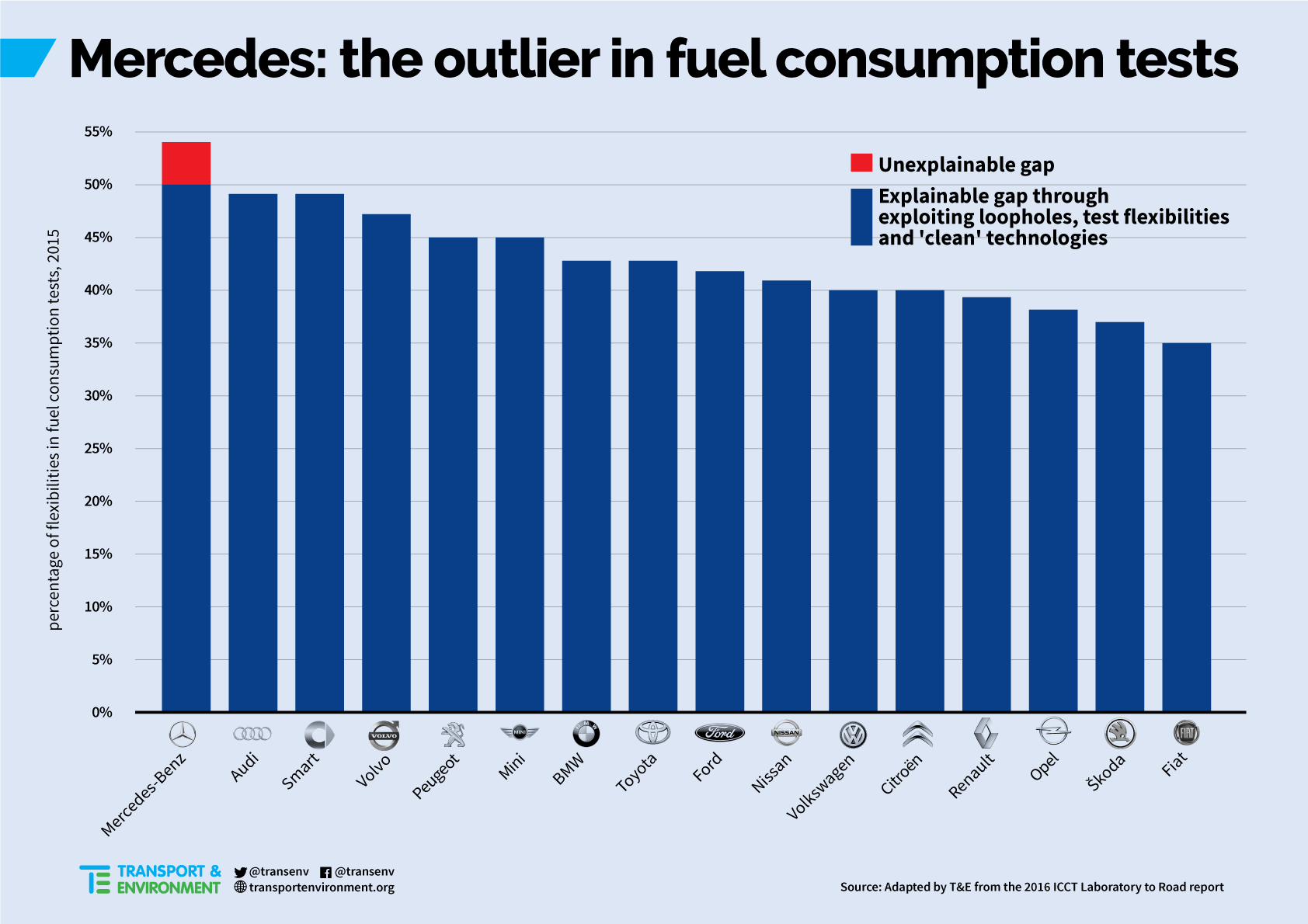 Distorted test results deceive European drivers whose cars consume much more fuel than is promised in glossy marketing materials. This means that a typical driver spends around €550 more in a year in additional fuel costs compared to what might be expected from the fuel consumption figures provided by car brands.

Greg Archer said: “There has been no improvement in the average efficiency of new cars on the road for four years because carmakers manipulate tests to achieve their CO2 targets instead of designing the car to be efficient on the road. As a result, drivers are being tricked and forced to buy more fuel; governments defrauded of tax revenues; and climate targets undermined. More than a year after the Dieselgate broke, we urge regulators in Berlin and the European Commission to get to the bottom of this Autogate.”

Cars are responsible for 15% of Europe’s total CO2 emissions and are the single largest source of emissions in the transport sector. European obligatory rules on carbon emissions require car manufacturers to limit their car fleet to a maximum of 130 grams of CO2 per km by 2015, and 95g by 2021. The Commission is to propose more stringent CO2 limits for 2025 in July 2017. 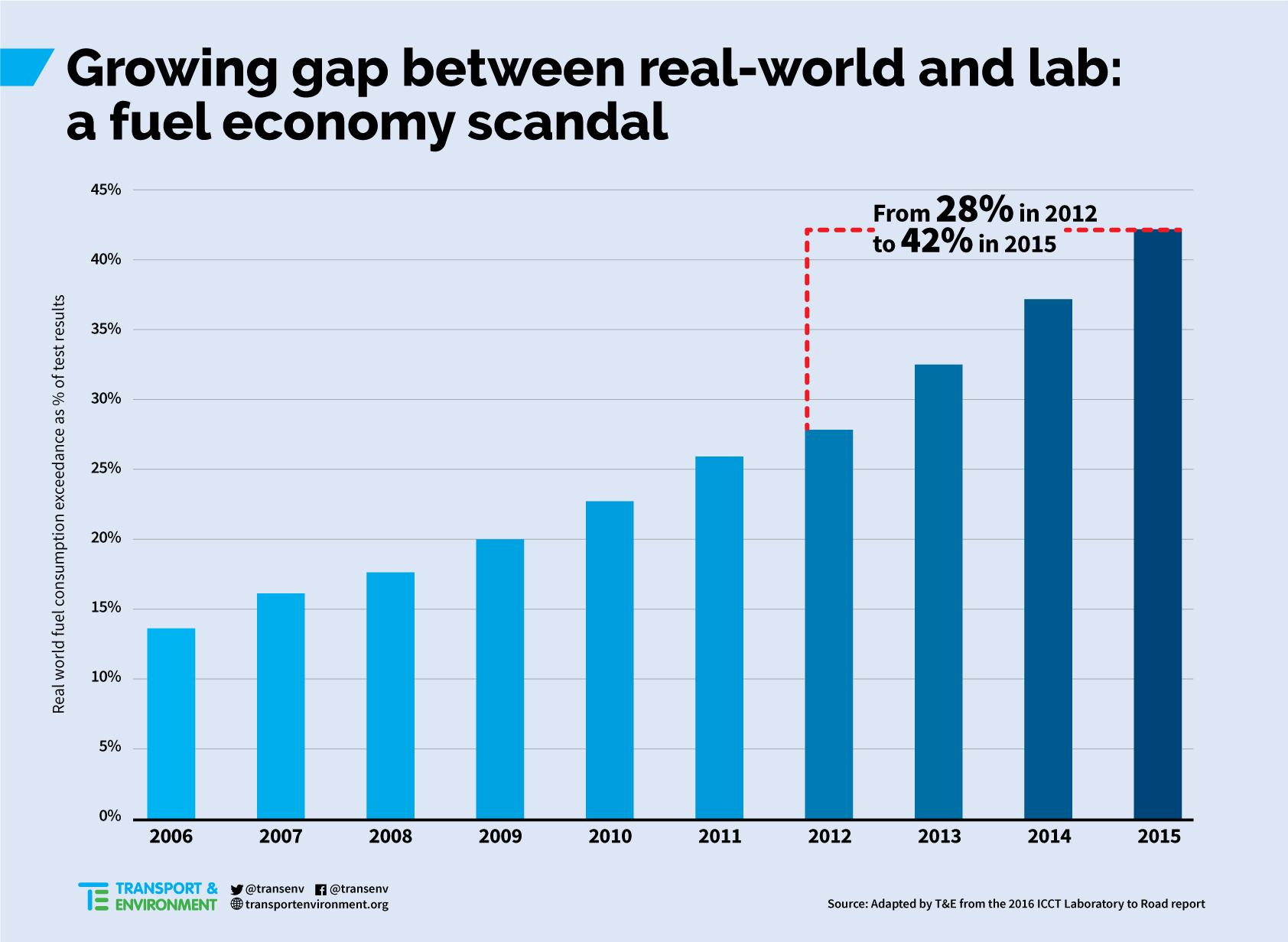