City bosses can permanently achieve pandemic-low air pollution levels by accelerating the ongoing switch to zero-emission vehicles, as well as extra walking, cycling, public transport and teleworking, the researchers found. Cleaner air will return faster if mayors embrace both. This transition is already well underway in many cities and mayors have been redesigning city plans to make space for active mobility and physical distancing.

In Budapest, Brussels, Berlin and London, a switch to zero-emission vehicles alone would suffice, even assuming limited availability of electric vans and trucks. Between 42% (Budapest) and 92% (London) of all kilometers driven by car would need to switch to zero-emission. Madrid and Paris saw particularly strong reductions of NO2 pollution, so only a combination of zero-emission vehicles and reduced car use can replicate lockdown levels. In Madrid, 10% of all kilometers travelled by light and heavy-goods vehicles, as well as 94% of car-km, would have to go zero emission. In Paris, 67% of all kilometers driven by cars, vans and trucks need to go zero emissions. 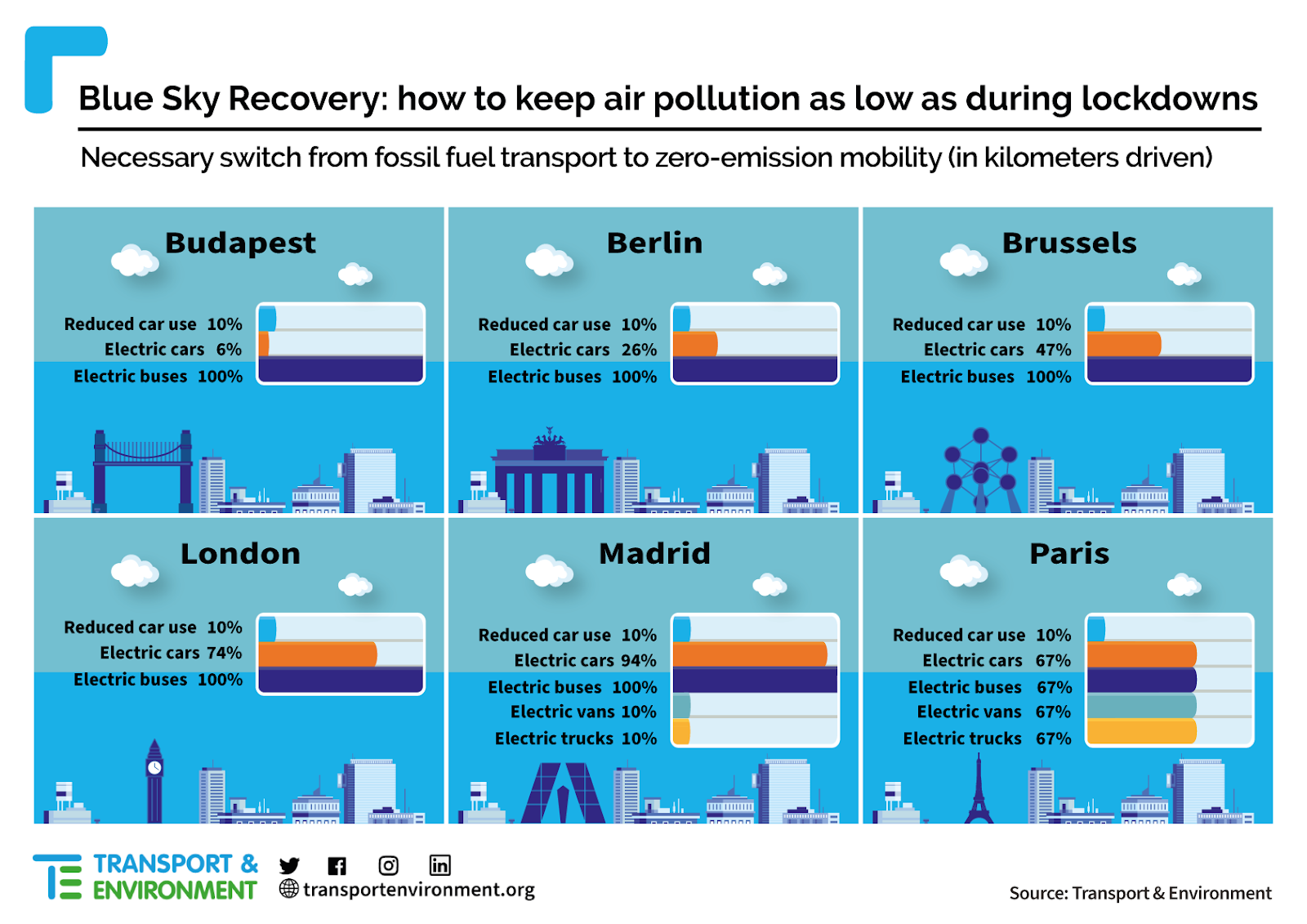 Looking further into a future without internal combustion engines in cities, the study finds that NO2 pollution from traffic would be eliminated and small particles (PM2.5) would be cut by up to 66%.

Jens Müller, Air Quality Coordinator at Transport & Environment’s Clean Cities Campaign said: “We all remember the clean air as an unexpected side effect of the early lockdowns. This literal breath of fresh air for cities came after decades of being shrouded by pollution. Our study shows how mayors can permanently bring cleaner air back without the lockdowns.  It is now on them to use their powers to boost clean travel options like electric vehicles and low emission zones.”

T&E called on mayors and governments to increase zero-emission zones, reform taxes to favour emissions-free vehicles, roll out the right charging infrastructure and zone off more public space to walking, cycling and public transport. It calls on the EU to announce a phase-out date for all fossil fuel vehicles by 2035 at the latest and tighten its 2025 CO2 standards for cars, vans, trucks and buses.

Air pollution causes an estimated 379,000 early deaths in the EU each year and scientists warn that those living in polluted cities are likely more at risk from Covid-19. Lockdowns in Brussels, London, Madrid and Paris brought a rapid drop in nitrogen dioxide (NO2) traffic pollution of 43%, 54%, 71% and 76% respectively. The pollution in Paris hit a 40 year low and Milanese residents could clearly see the nearby Alps again. Polling at the time found that a strong majority of urban residents wanted to keep the cleaner air. But pollution levels have since rebounded and in some cities even exceeded the lockdown low.