Fuel tax cuts for drivers will cost German taxpayers almost €7.6 billion, new analysis finds. The richest motorists will receive seven times more public money than the poorest, on average, according to the study by green transport group Transport & Environment (T&E). It said the government should instead agree to place an EU import tariff on Russian oil to raise revenue for cash support to low-income households and boost Germany and Europe’s energy security.

Stef Cornelis, T&E Germany director, said: “In times of crisis, politicians need to help the ones who need it most. A fuel tax rebate will achieve exactly the opposite by benefiting the wealthier who drive more in cars that burn lots of fuel. Instead we need measures that move us away from oil and are socially just, such as making public transport cheaper or introducing a Mobilitätsgeld.” 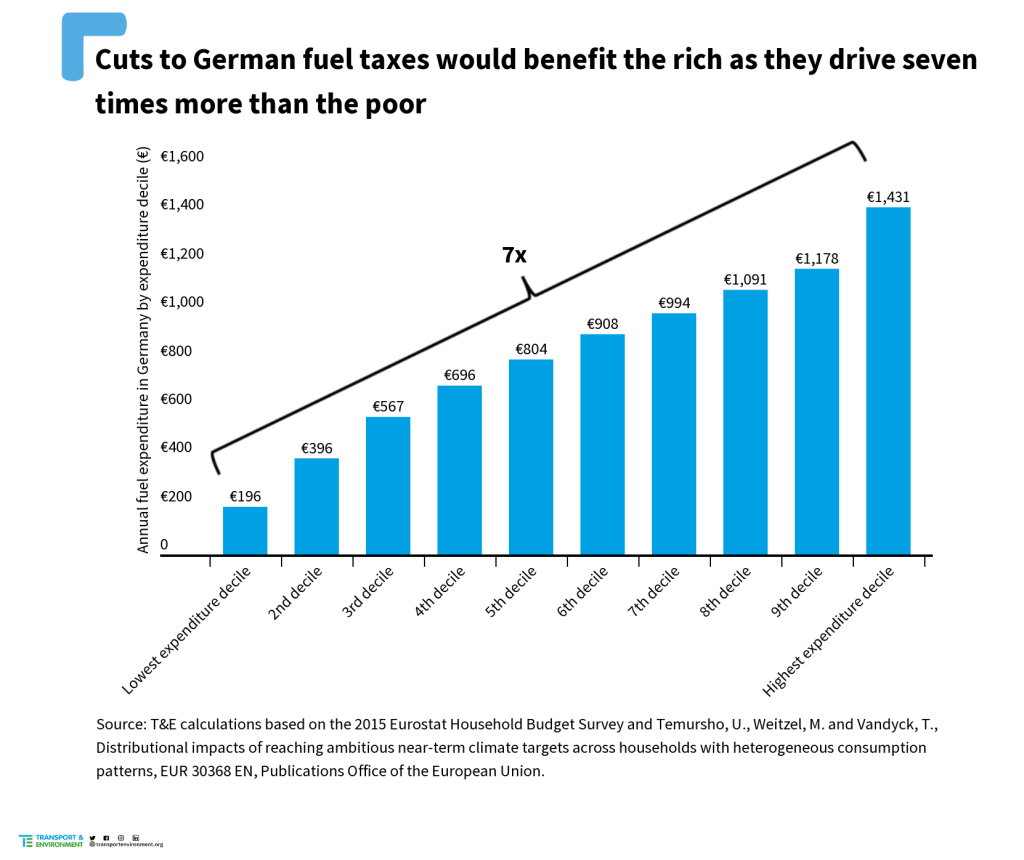 The richest 10% of drivers will receive seven times more in fuel tax cuts than the poorest, on average, because they consume far more fuel, the report finds. Rich motorists drive more, often alone, and with larger, more polluting vehicles. For example, a 15 cent cut in fuel excise over six months in Germany will reduce a BMW X5 driver’s bill by €580 compared to €165 for a Citroën C3 driver. Meanwhile, people who take public transport receive nothing.

Instead of introducing tax rebates, Europe and Germany should introduce an import tariff on Russian oil. Germany could raise at least €1.4 billion a year with such a tariff – and up to €5.5 billion annually if all the EU revenues are recycled to the member States. This money can be spent on more sustainable solutions like, for example, a Mobilitätsgeld.

Stef Cornelis said: “The upcoming Entlastungspaket of the German government is an opportunity to finally question and change the status quo around the fuel card system, Pendlerpauschale, the lack of speed limits and the massive subsidies for diesel and petrol company cars. All these measures are, in times of an energy and climate crisis, completely outdated.”

Study: A dereliction of fuel duty: Europe’s €9bn gift to Putin and the rich