Battery electric cars, which are zero-emissions, will be cheaper to make in Europe than fossil-fuel vehicles by 2027 at the latest. That’s according to recent research by BloombergNEF. Electric sedans (C and D segments) and SUVs will be as cheap to produce as petrol vehicles from 2026, while small cars (B segment) will follow in 2027, BNEF projects. Why? Falling battery costs, new vehicle architectures, and dedicated production lines for electric vehicles will make them cheaper to buy, on average, even before subsidies. And vans will cost less too. Light electric vans will be cheaper to make than diesel vans from 2025, and heavy electric vans from 2026. 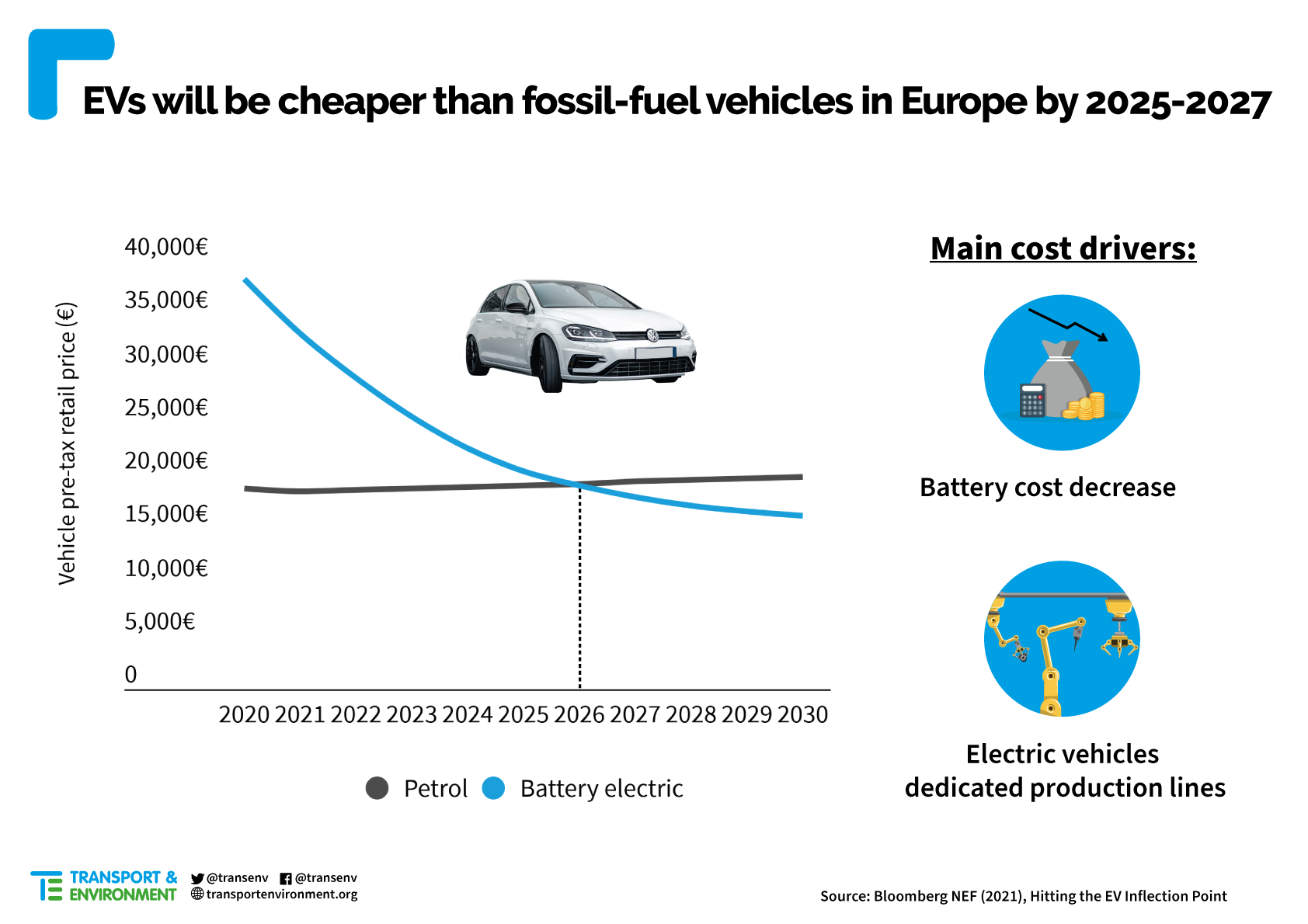 2. Will there be enough charging?

As part of the newly revised charging infrastructure law (AFIR), EU countries would now be mandated to deploy enough public chargers to match the fast-rising sales of electric cars. This means that there will be a comprehensive public charging network for electric cars, vans and trucks to drive seamlessly across Europe from 2025. EU countries from Portugal to Romania will be required to provide enough public charging capacity to power their electric fleets. In other words, there needs to be 1 kW of public charging power available – about the power of a microwave or dishwasher – for each battery electric car. This will ensure that the EU reaches its target of 1 million public chargers in 2025 and 3 million in 2030 (in line with T&E analysis), enough to meet the demand of more than 50 million battery electric cars.

The new regulation guarantees would unify standards and make charging cheaper to install and easier to use thanks to pan-EU requirements on ad hoc payments, price transparency and comparability, connectivity and access to information.

Does an electric vehicle pollute more than a diesel or petrol car over its lifetime? Check out our interactive tool to compare different vehicle types in different countries:https://t.co/pEKVthAKxU

3. How clean are electric cars? 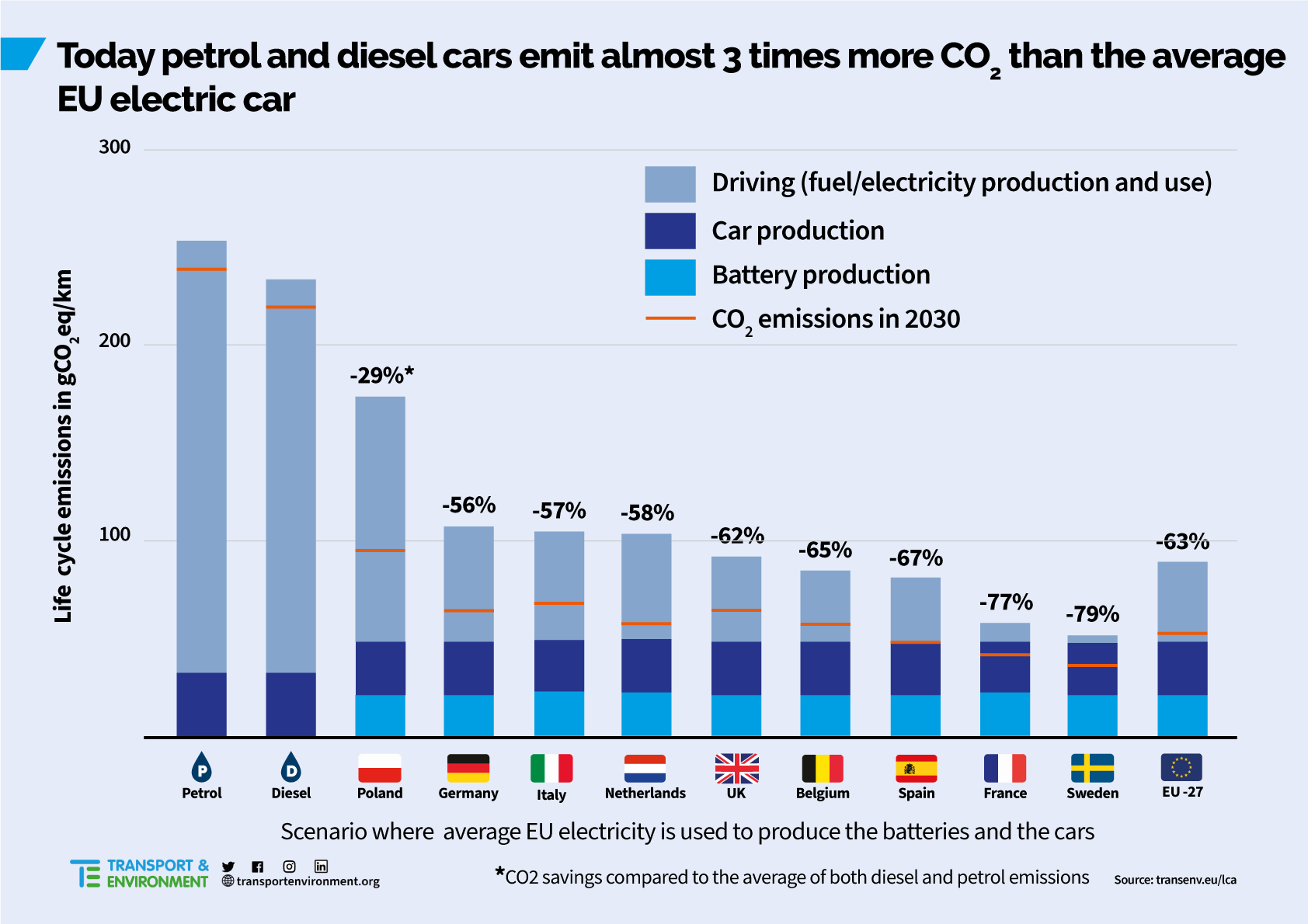 4. Will there be enough electricity to charge them?

A European Environment Agency briefing on EVs and the energy sector shows that, whilst EVs do add to electricity demand, it is not as much as you might think. In a scenario where 80% of the on-road EU vehicle fleet is electric in 2050, the share of Europe’s total electricity consumption from EVs will increase to only 9.5%. In many advanced economies, EVs actually prevent overall electricity demand from falling. Rather than being a threat to grid capacity, EVs can provide an important source of flexibility in the electricity system. Through smart and Vehicle-to-Grid (V2G) charging, EVs make it possible to store energy and use it at a later time, helping to reduce peak electricity demand.

5. What about particles and other air pollution?

Electric vehicles are far better than combustion engine cars when it comes to air pollution. First, switching from conventional internal combustion engine (ICE) cars to EVs instantly eliminates all toxic tailpipe pollution such as nitrogen oxides (NOx), particles, and carbon monoxide (CO). This is down to there not being a polluting combustion process. Just one of these harmful pollutants, nitrogen dioxide (NO2), is responsible for over 50,000 premature deaths per year in Europe.

EVs are also better when total particle emissions are counted including non-exhaust particle pollution (such as from brakes and tyres). ICE cars mainly use disc brakes to slow the car down and this emits particle pollution. Electric cars, on the other hand, use the electric motor for braking, reducing the need to use the brakes and therefore reducing particle emissions. To limit particle pollution from tyres, electric cars are mostly fitted with special tyres designed to cope with the specific needs, including the heavier weight, of EVs to ensure that they do not wear out too quickly.

Sticking with combustion engines would mean our economy stays addicted to oil. The huge difference between oil and the materials used to make batteries is that oil can only be burned once while the batteries last for years and can be recycled. With a small quantity of cobalt (less than 8kg for a 60 kWh NMC622 battery) you can recharge your car for 10 years or more. And your battery doesn’t die after 10 years. It can be used in other applications or it can be recycled so we can reuse that same cobalt for new batteries. After recycling, only less than 1 kg of cobalt (and less than 2 kg of lithium and nickel) would not be recovered (i.e. lost).

Furthermore, an EV battery uses up just 30kg of raw materials with recycling compared to the 17,000 litres of petrol burned by the average car. The gap is set to increase further as technological advancements drive down the amount of lithium required to make an EV battery by half over the next decade. The amount of cobalt required will drop by more than three-quarters and nickel by around a fifth.

Do you think electric car batteries are bad for the environment? Watch the video and let us know what you think. #EVs#climatechangepic.twitter.com/jNsrNtLyD8

7. Shouldn’t we simply limit the number of cars?

European clean car rules govern the emissions that carmakers have to reduce from their cars, regardless of how many they sell. This is what Europe’s target to go 100% electric means – no matter how many cars we will be selling in the future, they all have to be zero emission, as a necessity for our climate.

The number of cars also matters, for the environment, resource efficiency, but also liveability since they congest our cities and impact our safety and quality of life. Especially in cities, we can significantly reduce the amount of privately owned vehicles and shift to shared and active modes of transport such as cycling, walking, buses and trams. The best policies often lie at national and local level, e.g. redesigning cities, building cycling lanes, providing clean and safe public transport, but not building new roads. T&E and partners have created the Clean Cities Campaign to make sure our cities have fewer cars and no fossil ones by 2030.

But even if we reduce the number of cars, we will still have them in cities – as taxis, delivery vans or for businesses – as well as in less densely populated rural areas where electric cars are already today the best alternative. We need to make them zero-emissions, so making this technology mature and affordable for all is a ‘no regrets’ policy.

A recent study that looked at the impact of a shift to EVs on jobs in the automotive sector found that jobs lost in the traditional fossil-fuel focussed industries would be offset by new jobs in the fast growing e-mobility value chain. A key challenge for the transition is making sure workers have the right skills for these new jobs.

Europe will also make its own batteries. 38 European gigafactories are planned to produce car battery cells by 2030, amounting to €39.5 billion worth in investments, and potentially creating 60,000 jobs in manufacturing. It means Europe is set to have enough batteries to power over 90% of all new vehicle sales by 2030. If anything, the EU could have excess production of batteries for the demand from its own market.

Electric vehicles will play a central role in the automotive sector’s recovery from the pandemic and it is crucial Europe does not cede technological leadership – and the jobs and investment that comes with it – to China and other countries. This means making a strong commitment to EVs now. Delaying action through a ‘managed decline’ of the ICE, eg. by pushing hybrid technology or e-fuels or delaying the phase out of the ICE, will leave European carmakers at a competitive disadvantage with negative impacts on investment and future jobs.