Battery electric vehicles (BEVs) are one of the strongest solutions for combating  climate change and improving local air quality in urban areas. In Europe, passenger vehicles powered by internal combustion engines (ICE) are responsible for 12% of GHG emissions, for 28% of NOx emissions, for 5% of PM2.5 emissions, accounting for significant portions of nearly all local air pollutants. In cities specifically, passenger vehicles contribute to 47-55% of NOx emissions, and 13-39% of PM2.5 emissions. Thus, residents of European cities are at high risk for transport related air pollution.

Consequently, European cities are moving quickly to confront the pollution problem. A major strategy is stimulating adoption of BEVs, as well as other zero-emission solutions. Some cities have made bold targets to ban ICE vehicle use by 2030, while others have already begun to phase-out ICE vehicle use among private-hire vehicles (PHVs) and taxis. Such steps are encouraging, but they risk being highly problematic if infrastructure is not in place to make the transition to a BEV easy.

To do so, Guidehouse Insights evaluated data on public charging deployments, BEV adoption, and the evaluation of government support measures. The seven cities were ranked according to: (a) how well developed the public charging network is relative to the number of BEVs and the overall vehicle fleet of the city, and (b) the scope of actions adopted by city and national governments to support charger deployments and use –both public and private.

The results show that London leads the 7 cities thanks to their greater charging infrastructure roll-out, higher average charger capacity and key policies to support the uptake of BEVs –such as phasing in zero-emissions capability requirements to private hire vehicles (PHVs) and taxi licensing regulations by 2025. Amsterdam –who is targeting the ban of ICE vehicles from city streets by 2030– and Berlin follow London with good charging infrastructure and appropriate policies, but Paris, Brussels, Madrid and Lisbon fall behind with either charging infrastructure that is lacking, policies that are inadequate to accelerate the transition to BEV fleets, or both. 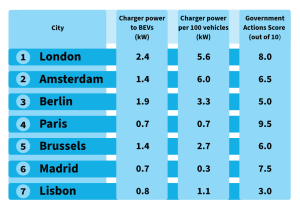 As seen on the ranking, the two cities that rank highest –London and Amsterdam– do so thanks to a high roll-out of public charging infrastructure and bold targets for transitioning away from ICE vehicles as quickly as possible with assertive plans to prohibit their use.

London and Amsterdam are standing well above the rest of the cities in public or semi-public charger numbers, with about 11,000 for the former and close to 8,000 for the latter. With the exception of Paris – standing at around 7,000 chargers – the rest of the cities don’t even come close, while at the bottom of the ranking, Madrid and Lisbon really struggle with around 700 chargers only each. Moreover, London stands out as the only city that has over 2 kW of average charger power for existing BEVs, while Amsterdam is the only city with over 6 kW of average charger power per 100 vehicles (which shows the great potential of Amsterdam for converting ICE vehicles fleet to fully electric).

A combination of city fast-charging hubs in key areas of the city and slow on-street chargers where people live has hence proved to be the way forward, as London and Amsterdam clearly show. Furthermore, in addition to banning the sales of ICE vehicles at national or EU level, plans at city level to prohibit the use of ICE vehicles will set the right policy signals for private market actors to invest in BEV solutions and therein charger infrastructure deployment.

The analysis also indicates that where governments have been ambitious with policy, the charging infrastructure deployment has been better. A key action among all of these cities are programs and policies to make chargers available in residential areas. Other notable actions include charger-ready building codes, public and private and workplace charger deployment subsidies. While progress in these cities is encouraging, there is still more that can and should be done. Specifically, adopting policies to enforce a ‘right to plug’, which would facilitate and accelerate the processing of charger requests for tenants in shared residential buildings and employees of workplaces.