The UK’s VCA type approval authority approved for sale nine of the ‘Dirty 30’ vehicles, including a Jaguar, a Range Rover, and three British-made Nissan, Toyota and Honda models. Germany’s KBA approved seven car models: three Mercedes, two BMWs, one Opel and one Skoda, owned by the VW group. France gave the green light to another seven, all French brands: four Renaults, one Peugeot, one Citroën and one Dacia, Renault’s budget marque. Italy rubber-stamped the FIAT 500X, which is at the centre of a recent spat between German and Italian authorities over emissions cheating. 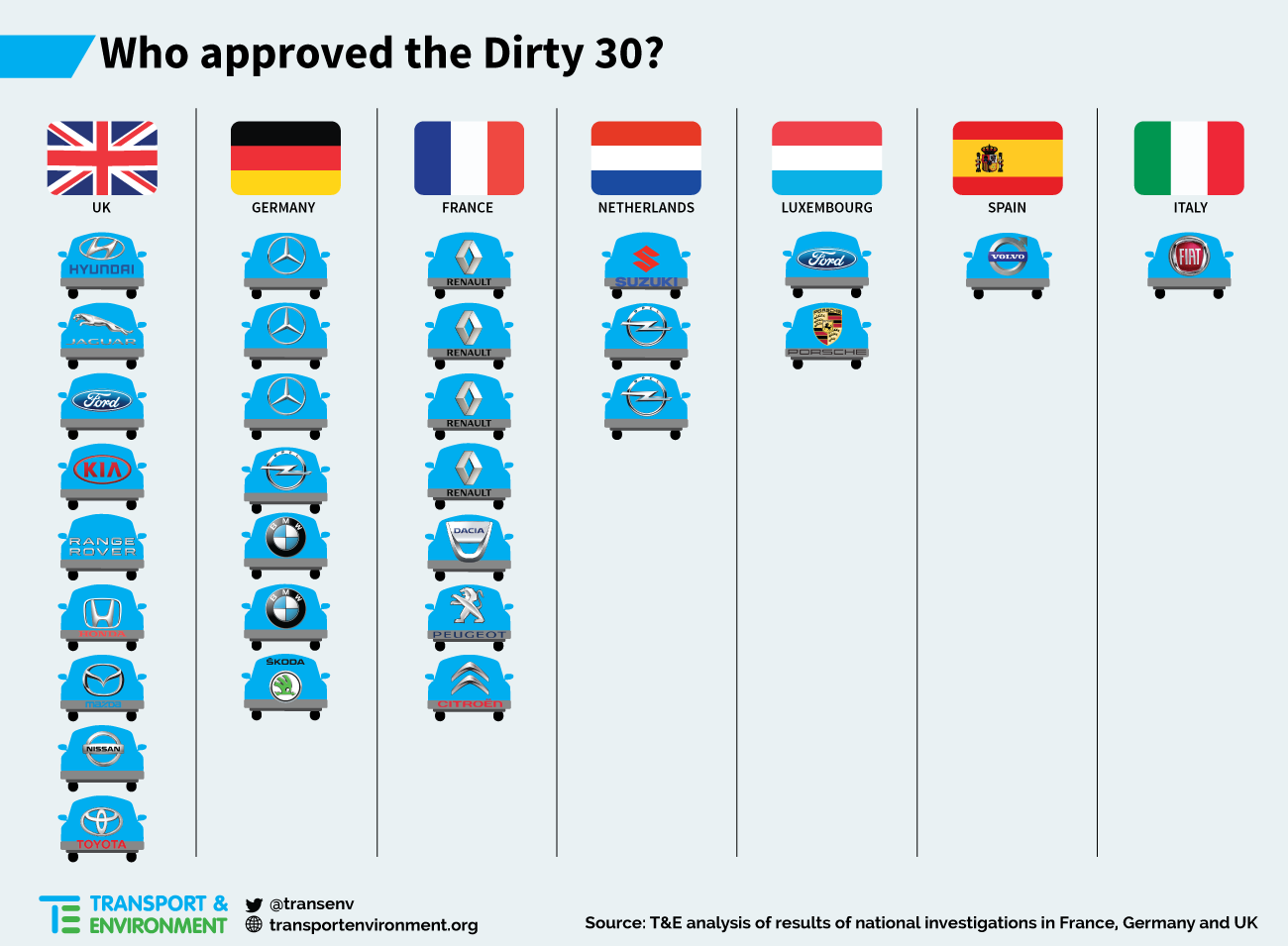 All 30 cars on the list have excess NOx emissions in real life and deploy strategies that turn down or switch off pollution controls in circumstances beyond those prescribed in the EU test, notably lower temperatures, hot engine starts, and rides longer than 20 minutes.

Greg Archer, director of clean vehicles at T&E, said: “Carmakers are choosing to play at home with a biased referee, guaranteeing that they win but their cars pollute and people die. What else than Dieselgate do you expect when Germany approved Mercedes, France Renault, the UK Jaguar and Italy Fiat? Either we break the cosy relationship between national authorities and their car brands with effective European supervision and independent testing or the cheating will continue.”

Screening tests by France, Germany and UK this year highlighted that most modern ‘Euro 6’ diesel vehicles emit much more NOx in circumstances not covered by the test, such as rides below 20°C, with a hot start, and longer than 20 minutes [2]. But up until now the national approval authorities have not taken legal action or instigated follow-up investigations. Instead countries continue to protect their car industries: tomorrow (Tuesday) Germany is tabling a motion for EU transport ministers to blame EU legal definitions for Dieselgate, but not national testing authorities, such as its own KBA, or carmakers.

Greg Archer concluded: “Countries are protecting their car industries from effective regulation at the cost of citizens’ health. Instead of playing the blame game, ministers should dig deeper in their investigations to unveil all types of defeat strategies. Without a true independent EU regulator, the current rules around defeat devices desperately need to be strengthened, and the type approval procedure in Europe overhauled.”

[1] T&E created a full database with results from the three national investigations in Germany, France and the UK. We added the Fiat 500X from the DUH test because it offers interesting additional insights.

The criteria were the following:

[2] The official test, the New European Driving Cycle (NEDC), begins with a cold start, takes place at temperatures between 20 and 30°C, and lasts 19 minutes and 40 seconds.