In a context where electric vehicles are the main compliance technology and are fast becoming cost-competitive, the ZLEV benchmark is no longer necessary. Instead, it weakens the stringency of car CO2 standards since almost all carmakers are expected to receive the full ZLEV bonus from 2025 on and will thus see their CO2 emission target weakened by 5%. As a result they could sell higher-CO2 petrol and diesel models than today and still comply with the regulation. Removing the ZLEV crediting system would save 4.5 MtCO2 in 2030, corresponding to 1% of total emissions from cars in 2030. It should be removed no later than 2030, while the 0.7 multiplier designed to stimulate PHEV sales should be removed as soon as 2025. 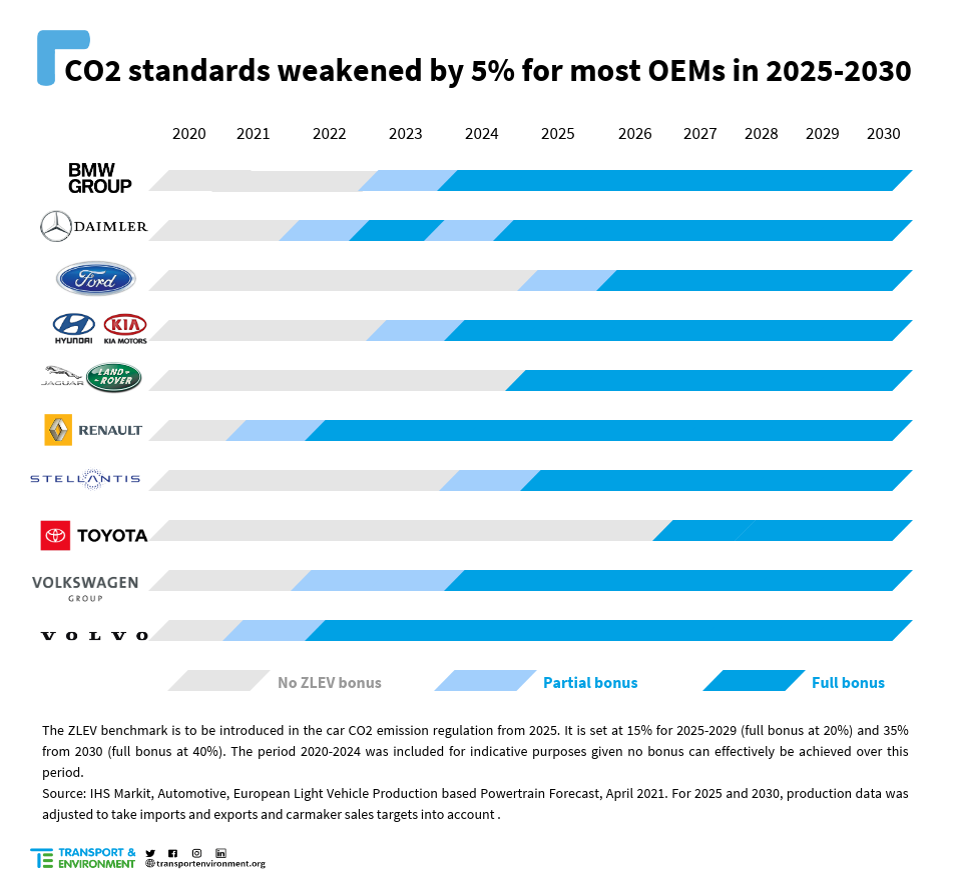 — How the ZLEV bonus works —

ZLEV Benchmark: From 2025 on, a new incentive mechanism for zero- and low-emission vehicles is introduced, replacing the super-credit mechanism which is phased out after 2022. This crediting system allows a carmaker to relax its specific emissions target if its share of ZLEV sales—i.e. vehicles emitting less than 50 gCO2/km—exceeds the 15% benchmark from 2025 to 2029, and 35% from 2030 onwards. Exceeding the ZLEV benchmark by one percentage point increases the manufacturer’s CO2 target (in gCO2/km) by one percent. Target weakening is capped at 5%, so carmakers benefit from the full bonus by selling at least 20% ZLEV from 2025 on and 40% from 2030 on.

PHEV multiplier: The ZLEV share of sales is weighted according to a system which counts zero-emission vehicles as one and low-emission vehicles—in practice PHEVs—as less than one. The exact weight is based on their emissions, so as to give greater importance to PHEVs which emit less. This emissions-based weighting is inflated by the 0.7 multiplier, added in the final trilogue negotiations back in 2018. This multiplier gives PHEVs up to 0.3 credit more than in the original proposal. For example, if the average emissions of a PHEV are 45 gCO2/km, then it is counted as 0.37 in a carmaker’s ZLEV share instead of as 0.1 without the multiplier. A PHEV emitting 50 gCO2/km gets 0.3 credits instead of zero as in the original proposal.

PHEV factor with and without 0.7 multiplier

Simply removing the 0.7 PHEV multiplier from the ZLEV formula would reduce the amount of ZLEV credits by 12%. This would make the benchmark—and thus the bonus—harder to reach and would in turn save 3 MtCO2 in 2030. It would also encourage carmakers to produce lower-emission PHEVs to keep qualifying for credits. Yet, even if the PHEV multiplier were removed, BMW, Stellantis, Volkswagen and Volvo would still reap the full bonus in 2025–2030, meaning CO2 reduction targets would be loosened by 5% for 56% of the EU car market.

— Why the ZLEV bonus is outdated —

Virtually all major European carmakers will get the full ZLEV bonus through 2030. Based on IHS Markit car production forecast, T&E calculates that all major car manufacturers with the exception of Toyota and Ford would benefit from a full bonus of 5% from 2025 on (and all of them from 2027 onwards). This amounts to at least 81% of the European market in 2025 that is covered by carmakers benefitting from the full 5% bonus, and at least 92% of the market in 2030. From 2025 to 2029, the full bonus weakens the CO2 reduction target from -15% to only -10.8% for these carmakers.

Based on T&E modelling, removing the ZLEV crediting system would save 4.5 MtCO2 in 2030, corresponding to 1% of total emissions from cars in 2030. Also, carmakers that get the full ZLEV bonus could make their petrol and diesel models emit 2.6% more CO2 per year, and still comply with the regulation. In short, the ZLEV bonus endangers the effectiveness of the CO2 standards because of its current design, which lags behind market reality.

The ZLEV bonus was designed years ago as an incentive mechanism for zero- and low-emission vehicles. It is now clearly inadequate in the context of a booming and rapidly maturing EV market. The simplest and most effective solution to safeguard the integrity of the car CO2 regulation is to remove the ZLEV bonus as soon as the EU-wide EV market reaches 25%, and no later than 2030, leaving the CO2 targets as the central mechanism to drive electrification. In the meantime (or as a fallback option), the PHEV multiplier should be removed from the calculation of ZLEV credits from 2025 onwards (going back to the original Commission and Parliament proposals from 2018) and the benchmarks should be raised in line with CO2 emission target ambition.