Black Friday is notorious for peak consumerism and waste. But the true cost of the headline grabbing discounts is also paid in the climate impact of moving all that extra freight on our roads. Trucking retail goods is a dirty business and that business spikes massively around Black Friday. It’s maddening because there’s a ready-made solution to slash the climate impact of trucks – if only regulators would send the right signal to truckmakers to start using it.

To quantify the truck pollution impact of the Black Friday phenomenon, T&E analysed historical sales data to estimate the additional demand created by Black Friday. We then converted that into truck activity and calculated the associated emissions[1]. The results dramatically highlight the huge climate impact trucks have, not just during the week of Black Friday, but each and every week.

During this year’s Black Friday week, 1.2 million tons of CO2 will be released in the air by trucks transporting our packages to warehouses and stores around Europe. That’s almost 600,000 tons extra, or a whopping 94% more than in an average week. 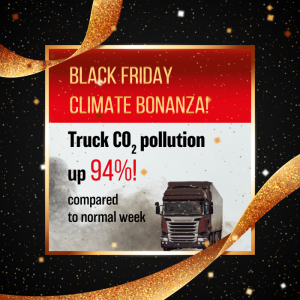 Trucks will be rushing all over the continent to make sure that physical and online stores meet the demand of consumers.[2] The extra pollution in one week is equivalent to the yearly emissions from all the trucks in Bulgaria, or about 3,500 return flights from Paris to New York[3].

Trucks are the primary way of moving goods in Europe, accounting for 64% of goods transport emissions[4]. Their activity is expected to grow steeply in the coming decades[5]. Right now, almost all of them run on polluting diesel, which is bad for the climate and for the environment.

But it doesn’t have to be this way. There is a ready made solution to the problem of road freight pollution in the form of zero-emissions trucks. These vehicles are on the market today, and by 2035 virtually all new electric freight trucks – including long-haul – will be cheaper to own and run than their diesel equivalents, while driving as far and carrying as much. Hauliers should be in no doubt that electric trucks will match diesel on cost and operational capability. 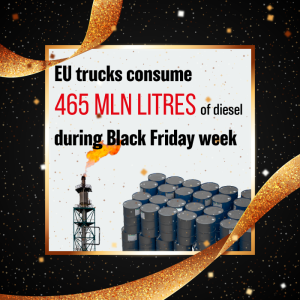 Some major truck buyers have started to switch already. Amazon just announced it will be adding more than 1,500 electric heavy goods vehicles to its European fleet in the next five years and Deutsche Post DHL says it will procure 44 new electric trucks. But, with electric trucks accounting for less than 1% of new rigs sold, progress towards zero-emissions trucking is far too slow.

It doesn’t have to be, and EU regulators are preparing to step in by tightening climate targets for heavy-duty vehicles. The only question now is, how ambitious will the EU be to get to zero?  Anything later than a 2035 deadline for ending sales of new trucks with engines will doom the bloc to failure on its 2050 economy-wide net-zero emissions target. 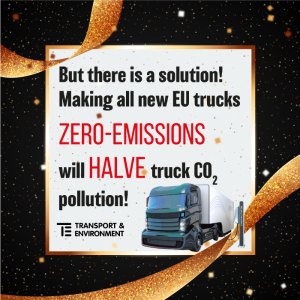 If the EU were to adopt a 2035 phase-out date, it would be possible to already achieve an 11% reduction in CO2 emissions from trucks by 2030, and a 48% reduction by 2035 (relative to 2022). That means Black Friday emissions from trucking would also be down over 10% already in 2030 and almost halved in 2035. Allowing polluting trucks to be sold any later than 2035 would lead to many diesel rigs still being on our roads by mid-century. We could say bye-bye to net-zero and hello to a hotter, more chaotic world that not even ‘retail therapy’ would make better.

[1] A Methodological note for a detailed explanation is available for download.

[2] Note that this analysis is not counting the emissions from delivery vans making home deliveries during Black Friday, but just the supply of physical stores and warehouses from where delivery vans depart.