Trucks and buses make up just 2% of vehicles but are responsible for 28% of road transport CO2 emissions in Europe. As the EU prepares to tighten climate targets for heavy-duty vehicles in November, new analysis shows that the last heavy goods vehicles with engines will need to be sold by 2035 if polluting vehicles are to be off the road by 2050 – in line with the bloc’s net-zero emissions commitment.

Even with the current CO2 targets for truckmakers, trucks and buses would undo the entire emissions savings from cars and vans expected by 2030, the analysis by Transport & Environment (T&E) finds. This is being driven by increasing activity. CO2 emissions from heavy-duty vehicles increased by more than one-quarter between 1990 and 2019. Truck activity is expected to further increase by 44% between 2020 and 2050 and bus activity by 72%, according to the EU Commission. 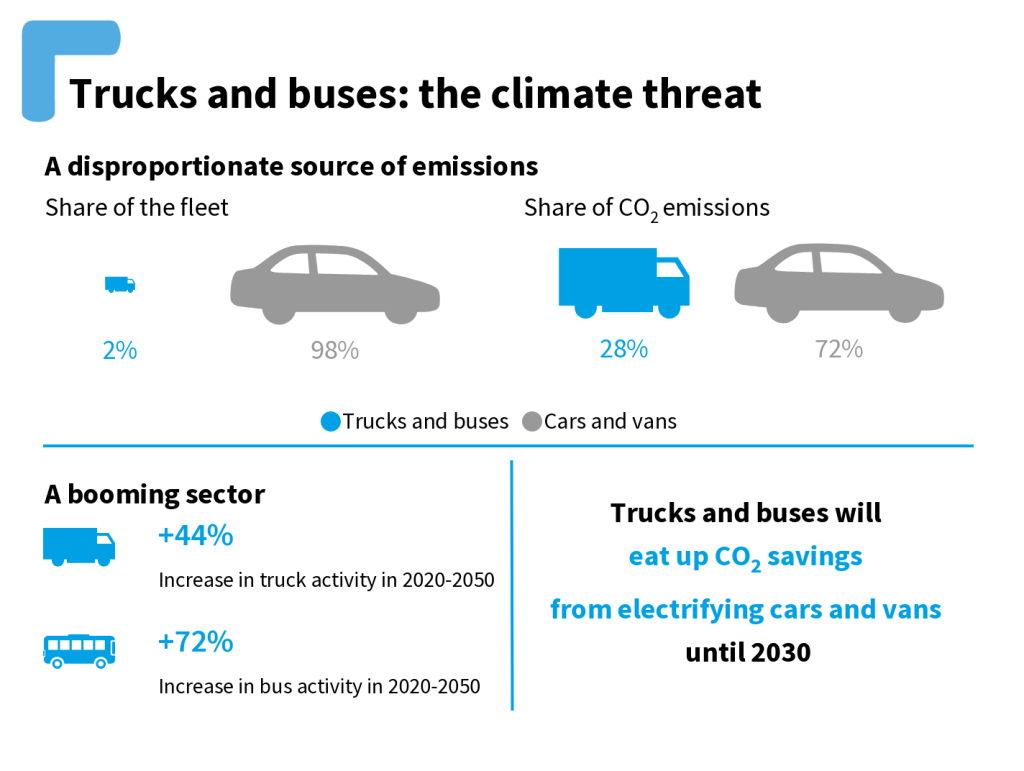 Sofie Defour, clean trucks director at T&E, said: “Transport is Europe’s biggest climate problem and trucks play an outsized role that is still growing. Polluting trucks will undo all the emissions savings from electrifying cars in the 2020s unless the EU changes the trajectory.”

Ending the sale of new combustion engine freight trucks [1] in 2030 is the safest bet for the climate, but the reductions required might be too steep to implement without disruption. 2035 is the latest feasible date to reach 100% zero emission vehicle sales if we are to put road freight on track to reach zero emissions by mid-century, according to the emissions modelling by T&E. The 2035 scenario would leave only a small number of diesel vehicles – older than average retirement age – still on the road in 2050. Trucks in Europe currently have a lifespan of 18 years, on average.

Setting a 2040 deadline would be too late, resulting in trucks emitting 644 million tonnes of CO2 more by 2050 than under the 2035 scenario. That’s 4% of the EU’s total remaining carbon budget – equivalent to the current annual road transport emissions of Germany, France, UK, Italy, Spain and Poland combined. Delaying the end date for combustion engines to 2040 would also force lawmakers to take drastic and costly measures to remove the 20% of the truck fleet that would still run on diesel in 2050 in this scenario.

Strong EU CO2 targets for truckmakers in 2030, leading up to a zero-emissions goal in 2035, would hold manufacturers to their electrification commitments, the study also finds. T&E’s 2035 ‘end date’ scenario would lead to 659,000 zero-emissions trucks on Europe’s roads in 2030 – roughly in line with truckmakers’ announcements. The consumption of diesel by European trucks and buses would be reduced by 9% by the end of the decade.

Sofie Defour said: “The review of the car and van standards has paved the way for trucks. Setting a 100% CO2 reduction target for 2035 will help Europe get the last diesel vehicles off its roads in time to help avoid climate catastrophe. Any later would mean a huge number of polluting trucks still being driven around in 2050.”

The current 2025 and 2030 standards for truck makers are too weak and would fail to reduce the CO2 emissions of heavy-duty vehicles, the analysis also finds. Under the current targets, heavy-duty vehicles would emit 32% more in 2030 than they did in 1990. There would be only 161,000 zero emission trucks on European roads (including the UK) in 2030, 74% less than what truckmakers are predicting.

T&E calls on the European Commission to propose the following targets when it revises the CO2 standards for heavy-duty vehicles in November:

[1] In all scenarios modelled, ‘vocational’ trucks – vehicles which are not used for goods delivery, eg construction trucks – reach 100% zero emission sales in 2040 as in some cases these may be harder to electrify.

All scenarios include the emissions reductions that will be achieved under the current 2025 and 2030 targets as a minimum and go beyond those, including the 2040 scenario.

Position paper on the review of HDV standards