Trucks and buses pose a threat to the EU’s climate ambition. Despite making up only 2% of the EU fleet, they accounted for 28% of Europe’s road transport CO2 emissions in 2020. Driven by increasing activity and lack of efficiency improvements, CO2 emissions from heavy-duty vehicles (HDVs) were 28% higher in 2019 than in 1990. And they will keep growing, with truck activity expected to further increase by a whopping 44% between 2020 and 2050 and bus activity by 72%. 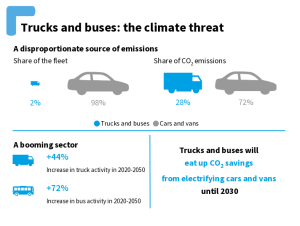 The forthcoming 2022 review of the heavy-duty vehicle CO2 standards is the key opportunity to finally put a stop to these growing emissions from trucks and buses. The European Commission is set to unveil its proposal to review the HDV CO2 standards in November 2022.

In a new study, T&E has modelled three policy scenarios to assess the climate impact of different levels of ambition for the revision of the HDV CO2 standards. The Central scenario sets a 100% zero-emission target in 2035 for all freight trucks and buses, in line with cars and vans. The Delayed scenario pushes the target back to 2040; and the Accelerated scenario brings it forward to 2030.

Why a zero-emission sales target in 2035 is needed

As shown below, both the Central and Accelerated scenarios can set trucks and buses on a trajectory towards a fully zero-emission fleet in 2050. On their own, the targets modelled achieve respectively a -95% and -98% CO2 reduction by 2050, with only a small number of diesel vehicles — older than average retirement age — still on the road. On the contrary, the Delayed scenario falls short of setting HDVs on a credible path to full decarbonisation, as by 2050 20% of the fleet still runs on diesel and emissions are only reduced by 89%. 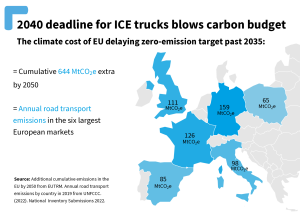 The need for action before 2030

Early action is needed to ensure zero-emission trucks and buses are already on the road in 2030, thereby reducing emissions and saving oil. If we keep the current 2030 target as it is, there would be less than half as many zero-emission trucks (ZETs) on the road in 2030 as what ACEA, the truckmakers’ lobby, is expecting. Raising the 2030 target in line with a 2035 end date for the sale of polluting HDVs on the other hand would deliver 659,000 ZETs by 2030, or just 7% more than what truckmakers themselves have announced. This means that the regulation would do exactly what a regulation should do: ensure the industry delivers on their announcements, while pushing them to be slightly more ambitious. As shown below, the Delayed scenario would provide no such incentive. Truckmakers would need to bring 45% fewer ZETs on the road than what they have already announced. 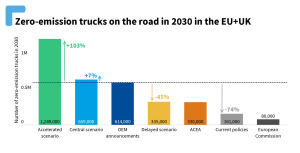 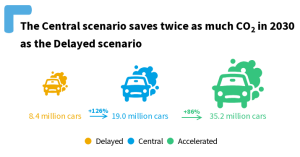 Strong climate targets in the 2020s also help reduce oil consumption. Relative to 2021 levels, diesel consumption in 2030 is cut in both the Central and the Accelerated scenarios, by 9% and 25% respectively. This would allow the EU to reduce its dependency on Russia for HDV diesel by -39% under the Central scenario and to completely cut  it under the Accelerated scenario. In contrast, the Delayed scenario increases HDV diesel consumption by almost 2%, creating challenges for the EU to divert away from Russian imports.

In summary, to achieve the EU’s climate goals, all new freight trucks and buses need to be zero-emission by 2035 at the latest, as is the case for cars and vans, with ambitious targets before then (mainly a -65% CO2 reduction target for medium and heavy trucks in 2030). Vocational trucks — mostly construction trucks responsible for 1% of HDV emissions — can achieve 100% zero-emission sales in 2040 without jeopardising Europe’s climate objectives. Urban buses on the other hand can go faster, achieving 100% zero-emission sales in 2027.

T&E urges the European Commission to include the following key elements in the upcoming proposal for the revision of the HDV CO2 standards (more detail in the position paper):