Despite publicly committing to net zero emissions by 2050, T&E’s analysis of corporate position papers finds that Aer Lingus, alongside other legacy carriers, have been lobbying decision makers to weaken the environmental ambition of the EU’s climate plans for aviation and its sustainable aviation fuels (SAF) proposal (ReFuelEU). These papers reveal major discrepancies between Aer Lingus’ public commitments and its tenacious lobbying efforts.

The lobbying efforts are made directly by airlines or under the guise of front groups such as the International Air Transport Association (IATA), which represents the interests of legacy carriers such as Iberia and Aer Lingus (under the IAG group), Air France-KLM, and Lufthansa – all of which are the subject of T&E’s new analysis. The study finds clear signs that IATA and IAG’s positions have filtered through a number of amendments submitted by decision makers to the European Parliament. This analysis corroborates findings by InfluenceMap that found that negative climate lobbying efforts are led by the IATA and other airlines.

Andrew Murphy, aviation director at T&E, says: “It’s no news that legacy carriers have enjoyed preferential treatment under EU climate measures. They make crowd-pleasing pledges of net-zero emissions, which is music to the ears of their investors and customers. But in the background, they send IAG and IATA to do their dirty work: lobby to weaken the EU’s climate package so they can continue to pollute for free.”

IAG and IATA, and by extension Aer Lingus, are looking to weaken the EU’s sustainable aviation fuels proposal (the ReFuelEU), by asking for the scope of the EU’s proposed fuel mandate to only apply to intra-EU flights. T&E calculations find that, if Aer Lingus were successful in its lobbying efforts, a mere 40% of emissions from its flights departing from Europe would be covered by ReFuelEU – meaning that a large majority of flights would not be affected by the EU’s SAF mandate. The European Commission’s current proposal covers 93% of emissions of Aer Lingus flights departing from Europe. If implemented, the Commission’s proposal would mark a step change in the EU’s effort to address aviation’s climate impact. 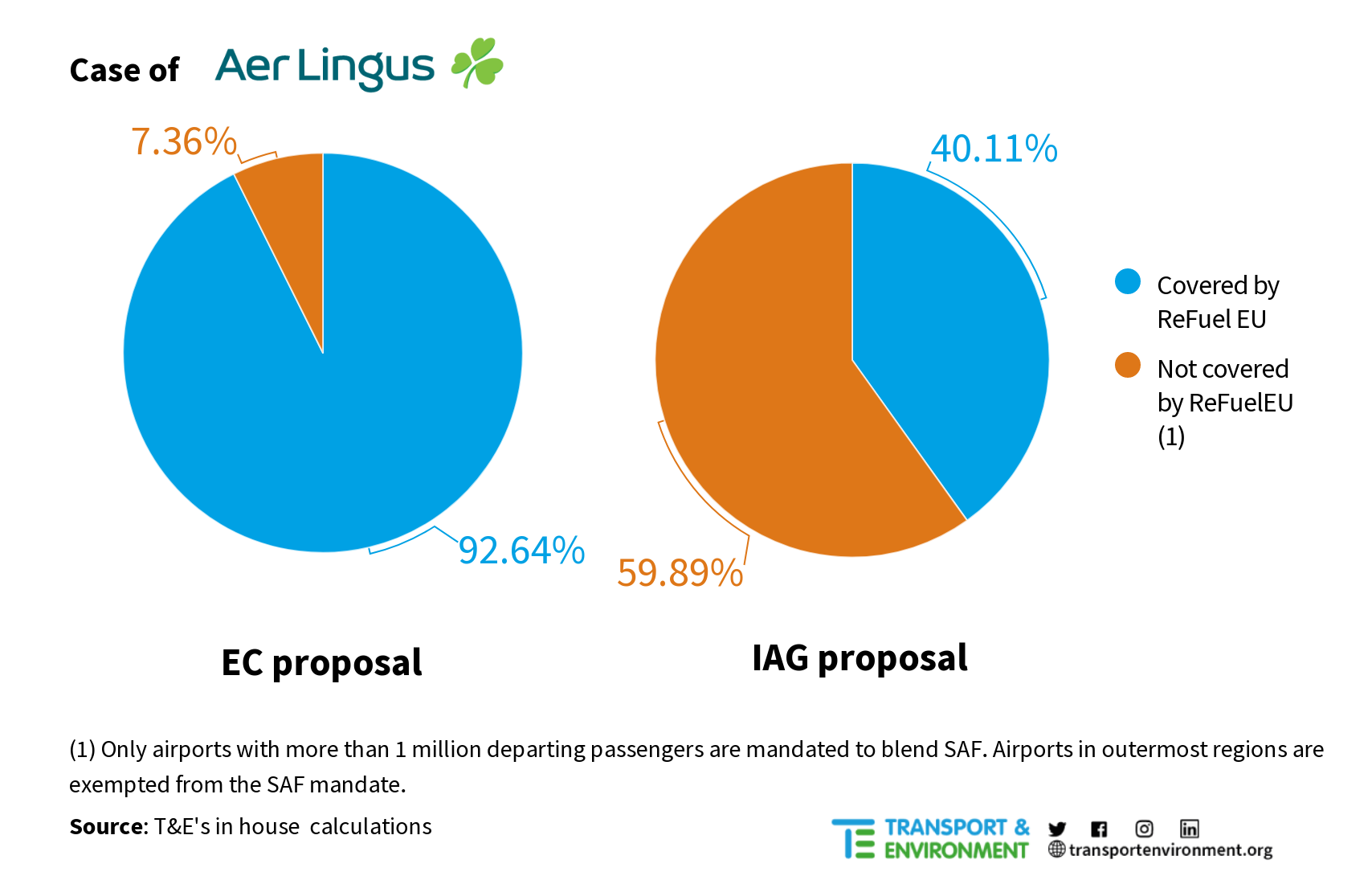 Despite pushing for ReFuelEU to only apply to intra-EU flights, they try to redeem themselves by pushing for a higher mandate for SAFs (10% in 2030, instead of the 5% proposed by the Commission).  But T&E’s analysis shows that an increased SAF mandate would not counteract the disastrous effects of a SAF mandate only on intra-EU flights. By 2030, it would lead to reducing the actual emissions savings expected EU wide by 38%. 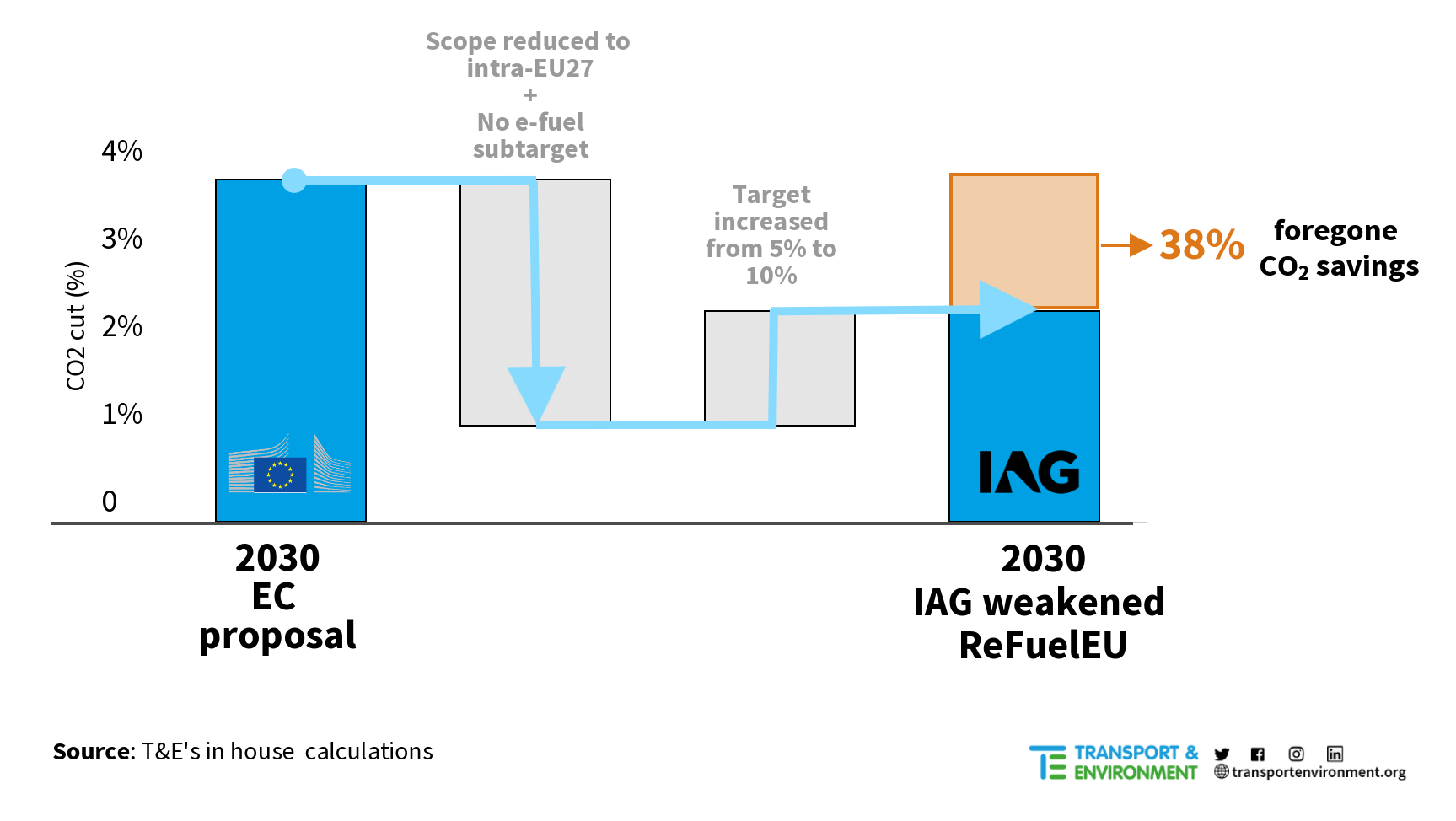 IAG has also lobbied to remove the sub-mandate for e-kerosene, the only fuel capable of being scaled up to meet the sector’s enormous fuel demands. Scrapping the mandate would leave the sector reliant on unsustainable animal fats and used cooking oil. It goes against the airlines’ public statements, expressing support for  innovative technologies including e-kerosene.

IATA and IAG’s relentless support for the UN’s flawed carbon offsetting scheme CORSIA is a final proof of the group’s negative climate lobbying efforts on behalf of Aer Lingus and other legacy carriers. IAG is asking for more time to give CORSIA the room to become an effective scheme, using the example of the EU ETS, which took 10 years to set up. However, we cannot wait for another 10 years to tackle aviation’s climate problem, and less so with an offsetting scheme that has already been proven ineffective.

“Aer Lingus and its mother organization IAG have one goal only: how can we continue to pollute but not pay? It is easy to find traces of their lobbying efforts in watered down climate texts. Long haul polluting flights have been left off the hook for long enough. If the EU is serious about tackling aviation’s climate problem and making the polluters pay, it must no longer bow to the demands of these industry lobby groups. Instead it must continue to make its climate laws as ambitious as possible”, concluded Andrew Murphy.

[1] 60% of emissions from flights departing from EU27, including outermost regions.

[2] T&E’s in-house calculations using AIS data from PlaneFinder (2019) and Eurocontrol CO2 calculator. 2019 was used as the last year prior to the covid crisis. Emission reductions are calculated assuming a GHG reduction factor of 85% for SAF compared to fossil kerosene.