Electric vehicles will be cheaper in 3 to 5 years…

Just as the tail doesn’t wag the dog, the market does not lead the way in tackling the climate crisis. In one of our flagship studies last year, T&E sought to find out at what point the sale price of a battery electric car would be equivalent to a petrol or diesel. With help from BloombergNEF, we found that it could happen within as little as three to five years, provided economies of scale are established now. A clear signal from European lawmakers on CO2 targets that ensures carmakers scale up the production of electric cars continuously in the 2020s is therefore crucial.

…but the new proposals put this electrification at risk

When the Commission proposal came out T&E was quick to show that the lack of ambition for targets until 2030, coupled with overly generous loopholes, is putting the electric car boom at risk. The current flexibilities mean that Europe could have 11.5 million fewer battery electric vehicles (and more combustion engine cars) on the road by 2030.

E-fuels not the answer for road transport

Rather than trying to meet new ambitious car CO2 standards, some industry players are betting  on synthetic fuels. T&E analysis, however, showed that e-fuels not only offer little to no economic or environmental benefits, but also that they would not alleviate the air pollution problems in our cities. 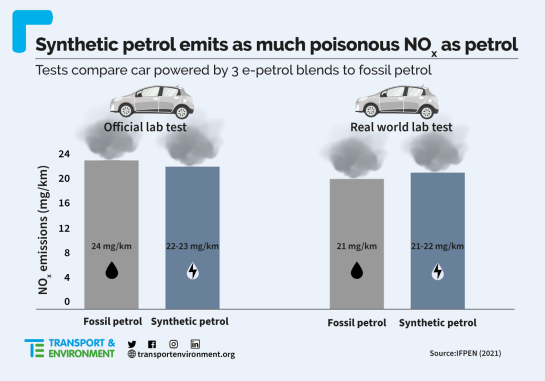 Earlier in the year T&E laid out a path for decarbonising Europe’s shipping industry: a combination of improvements in efficiency and switching to zero-carbon fuels, like hydrogen and e-ammonia. Despite this, the Commission is betting on the wrong horse. Its plan deliberately promotes fossil gas, with disastrous implications for the climate. In the graph below, as the targets (red line) kick in, LNG goes up. Watch out for upcoming T&E investigations on Europe’s shipping fuel regulation.

Biofuels and the RED

Data obtained in 2021 allowed T&E to assess the damage of 10 years of the EU’s disastrous biofuels policy. While palm oil might be gradually on the way out, biofuels are set to continue to ravage the world’s precious forests, with EU support for biofuels pushing up demand for soy, used cooking oil and other deforestation-driving products. It really is time to move beyond burning.

Private jets flying below the radar

T&E’s study on private jets confirmed that the super-rich have a disproportionate impact on the planet with their high altitude habits, and are held unaccountable for these emissions. Our data found that private jets are 10 times more carbon intensive than airliners on average, and 50 times more polluting than trains. The study lifted the lid on how private flights are untaxed in most European nations and that they are exempt from the EU ETS. By imposing a ticket and fuel tax on private jets, could the uber-wealthy pollute less and instead be part of the solution – by paying for the development of greener technology that can help accelerate innovation and clean flying for everyone?