How does shipping harm air quality in Europe?

In 2005, in the seas surrounding Europe (the Baltic Sea, the North Sea, the North-Eastern part of the Atlantic, the Mediterranean and the Black Sea), sulphur dioxide (SO2) emissions from international shipping were estimated at 1.7 million tonnes a year, nitrogen dioxide (NOx) emissions at 2.8 million tonnes, and particulate matter (PM 2.5) at 195,000 tonnes. Due to the application from the start of 2015 of the 0.1% MARPOL limit in Sulphur Emissions Control Areas (SECAs) in the North and Baltic Sea and English Channel, ship-sourced sulphur emissions have reduced considerably in these areas. Emissions will be further reduced in the remaining EU seas with the implementation in 2020 of the global sulphur cap which limits sulphur to 0.5% in shipping fuel.

However, in the long term, emissions may rise due to increases in transport volume. Ships also emit Black Carbon, tiny black particles produced by combustion and released from the ship exhaust which contribute to heart and lung disease and are a danger to the environment. Find out more about black carbon, which is also a potent climate forcer, here.

How much and how fast can pollution from ships be cut?

Technical measures to protect air quality from ships significantly are available and cost-effective. These measures include the adoption of cleaner fuels, adding closed-loop ‘scrubbers’ or other exhaust gas cleaning devices to ships (for SOx), SCR systems (for NOx), slow steaming, and wider use of alternative sources of energy including wind propulsion, battery-electric propulsion, alternative fuels like ammonia and hydrogen, and port-side electricity.

Why is it important to pay more attention to ship emissions?

Ships’ detrimental impact on air quality continues to increase as the sector grows. Land-based emissions – SOx and NOx – on the other hand, particularly from fixed installations, have been reduced dramatically at great cost. NOx from shipping is set to exceed NOx from all EU land-based sources in the coming decade. 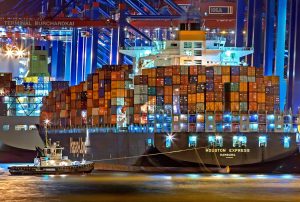 How do SO2, NOx and particle emissions from ships pose a threat to air quality and human health?

Poor air quality due to international shipping accounts for approximately 400,000 premature deaths per year worldwide, at an annual cost to society of more than €58 billion according to recent scientific studies. Through chemical reactions in the air, SO2 and NOx is converted into fine particles, sulphate and nitrate aerosols. In addition to the particles directly emitted by ships such as black carbon, these secondary particles increase the health impacts of shipping pollution. Tiny airborne particles are linked to premature deaths. The particles get into the lungs and are small enough to pass through tissues and enter the blood. They can then trigger inflammations which eventually cause heart and lung failures. Ship emissions may also contain carcinogenic particles.

The sulphur standard for shipping fuels that the International Maritime Organisation (IMO) adopted in 2008, and which will be implemented in 2020, is expected to save 26,000 lives a year in the EU as from 2020.

What are the new sulphur standards agreed by the IMO and in the EU?

In 2008, the IMO revised its standards on the sulphur content of marine fuels (contained in MARPOL Annex VI). In October 2012, the standards were officially transposed in Europe. Under the current EU regulations:

What standards are in place to reduce NOx emissions from ships?

While, ship fuel sulphur standards apply to the entire fleet, the NOx limits only apply to new ships. In addition, the strictest limit, called Tier III, currently only applies to new ships sailing in designated areas around North America from 2016, the NOx Emission Control Areas (NECAs).

In Europe, shipping in the Baltic Sea, the North Sea and the English Channel causes more than 800,000 tonnes of airborne nitrogen to be deposited each year, worsening the existing problem of eutrophication. Moves to have NOx included in the Baltic Sea, North Sea and English Channel ECAs were first discussed in 2007, but a series of environmental and economic studies to justify the NOx limits have taken several years to complete. In 2014, Russia failed to join its Helsinki Commission partners in agreeing to go forward with an application to the IMO. This coincided with Russian moves to delay the Tier III implementation dates for all NECAs which resulted in the fixed date (2016) in MARPOL for new ECAs to apply to North America only. Under the compromise reached, the start date of each new NECA will in the future be decided on an individual basis.

After many rounds of negotiations, the Helsinki Commission – grouping the nine countries with Baltic coastlines – agreed to apply to the IMO for stricter NOx emissions limits for new ships to apply in the Baltic. Simultaneously a similar application was lodged for the North Sea and English Channel. Both applications were approved by the IMO’s marine environment protection committee in October 2016 and adopted in July 2017. The stricter Tier III NOx standard will apply to new ships built after 2021 only while sailing in the North Sea, Baltic Sea and English Channel. NECA Tier III standard requires new ships built after 2021 to emit a maximum of 2-3.4 g of NOx/kWh compared to the current global Tier II standard of 7.7-14.4 g of NOx/kWh.

Since the IMO Tier III NOx regulation only applies to new ships and only when sailing in NECAs, additional measures are needed in Europe to address NOx emissions from the existing fleet. A levy on nitrogen oxides (NOx) emissions with revenues earmarked to fund the uptake of NOx abatement technologies would appear to be the most promising tool with achievable emissions reductions of up to 70%. In addition to a NOx levy with a fund, mandatory slow steaming of ships (with a levy and fund as an alternative compliance option) and a stand-alone levy on emitted NOx could also deliver emission reductions. Read our briefing here.

What technological improvements will the industry have to put in place to cut air pollution from shipping?

The shipping industry has at its disposal a wide range of options and techniques to reduce shipping’s impact on air quality, most of which are already available on a large scale and easily implementable. These include:

What should the EU and member states do to reduce air pollution from ships?

T&E has formulated a series of recommendations for the EU and its member states. These include: