New car CO2 emissions are virtually unchanged for a fifth successive year according to new data published by the ICCT and analysis by Transport & Environment. Since 2012 new car CO2 emissions have reduced by just 2% on the road compared to nearly 11% in fake laboratory tests. The average gap between real-world fuel consumption of cars and their official test results is at all-time high in Europe, the 2017 edition of From Laboratory to Road report by the ICCT, an independent research institute, reveals. This discrepancy has more than quadrupled since 2001, from 9% in that year to 42% in 2016. The gap translates into €400 per year in extra fuel costs for the average car, the ICCT estimates. More than half of the claimed (on-paper) reductions in carbon emissions since 2001 have not been delivered in the real-world.

Greg Archer, Director of clean vehicles and emobility at Transport & Environment, said: “The publication of the ICCT Laboratory to Road report today highlights the abject failure of the current car CO2 regulation. Since the car CO2 regulation was agreed in 2009 just 40% of the improvement has been delivered on the road with almost no change in real-world emissions for the last five years. The Commission must be ambitious in the forthcoming proposal for 2025 & 2030 Car CO2 standards. Specifically, it must ensure emissions cuts are delivered on the road and catch up a decade of failure in which carmakers cheated an obsolete test. The introduction of additional real-world CO2 test, similar to that now being used to tackle diesel NOx emissions, will ensure the new lab test isn’t manipulated like the old one."

The ICCT 2017 update of the report draws on 14 data sources from eight EU countries and analyses fuel economy figures from 1.1 million passenger cars.

This Wednesday 8th November the European Commission will publish a proposal to set new limits on car and van CO2 emissions for the period after 2020. Three key, contentious elements of the regulatory proposal are: the overall level of ambition, whether to include a mandate for sales of zero-emissions vehicles; and the introduction of a real-world test for measuring CO2 emissions.

Greg Archer added: “Climate change is accelerating and uncontrolled transport emissions are a principal cause. If Vice President Sefcovic and Commissioner Ca​​ñ​ete are serious about lowering CO2 emissions from transport, they should propose a 45% cut in new car emissions (2020-30) and a mandatory target for zero-emissions vehicles. Anything less and their claims of Europe being a climate leader at this week’s COP are as fake as the carmakers test results.” 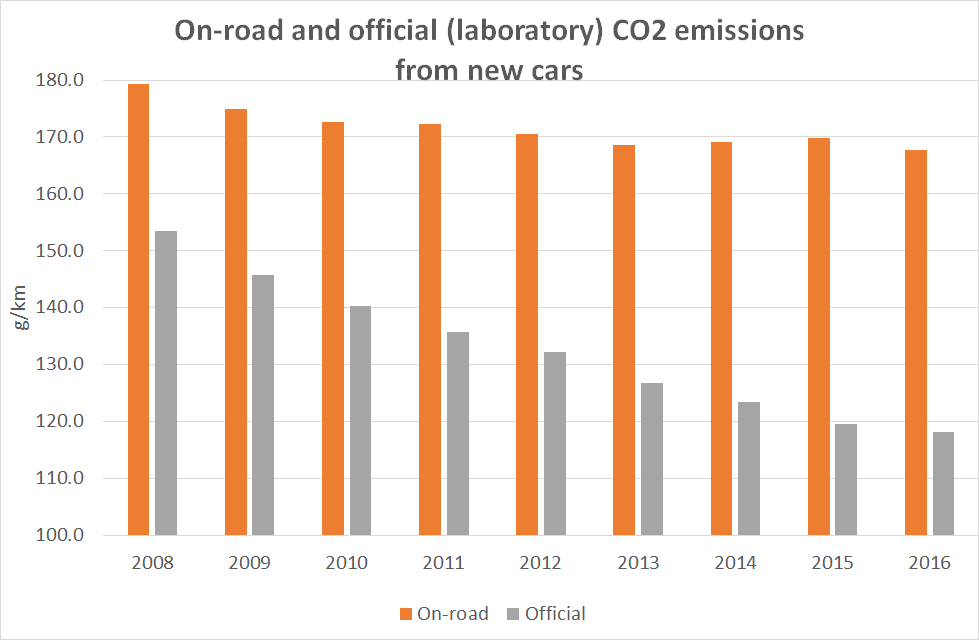 Based on data from the ICCT Laboratory to Road Report 2017 and Official Fleet average new car CO2 emissions from the European Environment Agency, 2017

Together with Germany’s Deutsche Umwelthilfe, Transport & Environment have launched a pan-European campaign on the costs and environmental impact of the growing gap between official and real fuel consumption, with the online tool get-real.org.

Get our press releases directly in your inbox.

Get our press releases directly in your inbox.

Do you have a question?